Niagara, Ontario – Of all the films he appeared in, Kirk Douglas, who passed away last week at the age of 103, was perhaps best known for his starring role in the 1960 film Spartacus.

Although Douglas was a controversial figure — including serious sexual misconduct allegations that came to light later in his life — Spartacus is seen as an important film that dealt with significant contemporary issues.

“The film was pivotal to 20th century history of confronting injustice and oppression,” says Katharine von Stackelberg, Associate Professor with the Department of Classics at Brock. “People keep thinking slavery is just something that belongs to the past, but as I emphasize in the slavery module of my introduction to Roman civilization course, slavery is very much a present and ongoing issue.” END_OF_DOCUMENT_TOKEN_TO_BE_REPLACED

“I’ve played some good guys as well, in Spartacus, Paths of Glory and my favorite picture, Lonely Are the Brave, so I had a mixture of parts in my life.” – Kirk Douglas

Not to many people under the age of 40 – unless they study film at college or university – know who Kirk Douglas is or know what ‘the golden age of Hollywood; means anymore, so I am not going to spend much time with this.

Except to say that one of the greatest film actors of the 20th Century – one of the actors that invented the ‘anti-hero’ and championed films that the corporatists in Hollywood would not necessarily make – died this February, at the grand old age of 103, and he is one of those who definitely deserves to be remembered.

His name was Kirk Douglas, and along with the already late great Marlon Brando, Tony Curtis, Gregory Peck, Robert Mitchum, William Holden, Humphrey Bogart, Spencer Tracey, and others of their ilk, he deserves to go down among the great, ground-breaking film actors and artists of the last hundred years. END_OF_DOCUMENT_TOKEN_TO_BE_REPLACED

We Are All Invited To A Photo Exhibition – Welland: Times Present, Times Past – Featuring the Work of one of Niagara’s Most Respected Artistic Photographers Sandy Fairbairn

‘Many of (Sandy Fairbairn’s) images recall the industrial history of the region, and others chronicle the ebb and flow of the downtown urban life of Welland.’

News from Bart GGazzola for AIH Studies in Niagara, Ontario

Curated by Bart Gazzola, the opening reception for Welland: Times Present Times Past will be on Saturday, February 15th,  from 2 to 5 PM.

Sandy Fairbairn has been taking photographs of Niagara for over forty years, focusing on the people and places around him. His images of Niagara stretch back to the 1970s, and some of the scenes presented in Welland: Time Present Time Past will be shown in the Rose City for the very first time. END_OF_DOCUMENT_TOKEN_TO_BE_REPLACED

Watch ‘Linda Ronstadt – The Sound of My Voice’ on Cable TV, this Saturday, January 4th at 9 p.m. (updated)

“Linda was like the queen. She was like what Beyoncé is now.”~ Bonnie Raitt, another legendary singer and musician, and a good friend of Linda Ronstadt

If you are as much of a fan of legendary pop singer Linda Ronstadt as I am, and you have access to cable television on New Year’s Day, here is something I am sure you would enjoy.

This Saturday January 4st, at 9 p.m. on CNN, the network will be broadcasting on TV screens for one of the first times (the first broadcast was this past January 1st) a full-length film documentary it produced this outgoing year called “Linda Ronstadt – The Sound of My Voice.”

I was fortunate enough to see this documentary on the big screen, at a repertory theatre on Cape Cod, Massachusetts last September, with a full house of film goers who broke out in spontaneous applause as the final credits began to roll. END_OF_DOCUMENT_TOKEN_TO_BE_REPLACED

For Those of Us Who Love Buying Our Music in a Real Record Store, Welcome to Hi-Fi Hits

A Shout Out from One Record Store Lover to All Others

Let me get this out of the way, right here at the top.

The following is by no means a paid ad and there is nothing in the way of compensation I am getting for writing and posting this other than whatever little I can do to help real brick and mortar record stores survive a vacuous era of online shopping that takes all of the heart and soul out of buying recorded music.

Those who have been loyal followers of Niagara At Large know that along with news and commentary about the climate emergency and about a whole host of other issues affecting our lives, I like to take time every once in a while to raise a voice of support for people and places I believe add to the richness of life in our communities. END_OF_DOCUMENT_TOKEN_TO_BE_REPLACED

A Happy 80th Birthday to one of Canada’s, and the World’s, Greatest Living People – Margaret Atwood

“War is what happens when language fails.”
― Margaret Atwood

“Stupidity is the same as evil if you judge by the results.”
― Margaret Atwood

A Brief Comment by Doug Draper, Niagara At Large

One of Canada’s greatest, Margaret Atwood, turned 80 this November 18th

Whenever I hear someone say Margaret Atwood’s name – and I know this is going to sound so silly given all the rich rewards she has brought to our lives through her writings – one of the first things that comes to mind is the role she played with others eight years ago to stop Doug Ford and his now late brother Rob from cutting funding for Toronto public libraries.

When asked about Atwood’s involvement in fight against library cuts, Doug Ford – then a Toronto city councillor and now premier of Ontario – was quoted telling a reporter; “I don’t even know her.”

Blathering on as if he were proud of himself for saying something that might impress a bunch of old school pals sitting at a bar, Ford punctuated his naked stupidity with the obvious follow-up; “If she walked by me, I wouldn’t have a clue who she is.”

Sad to think that it was episodes like this that endeared Doug Ford to enough Ontarians (“I like him cause he sounds like a regular guy,” I’ve heard more than a few of my fellow Ontarians say) to plunk him in the seat of the most important political office in the province. 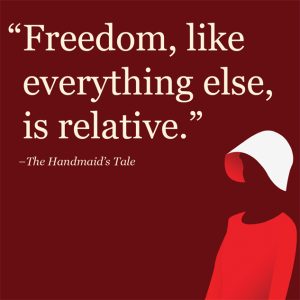 For those of us who at least know who Margaret Atwood is, the Canadian author who has become known and celebrated around the world for  critically acclaimed, award-winning books like ‘Cat’s Eye’, ‘The Handmaid’s Tale’, and her most recent runaway bestseller, ‘The Testament’, turned 80 this November 18th, and a very happy birthday to her.

Margaret Atwood is not only a great writer. She has shown herself to be a great humanitarian for at least as many years as people began reading her work some five decades ago.

For this long-time environment writer, I also became aware earlier on that she has been passionate spokesperson for protesting and preserving the life-sustaining gifts of our mother earth.

On that score, Margaret Atwood has been among a growing number of others who have called out for action on climate change.

“The laws of science are unrelenting, and they don’t give second chances. In fact, that bill is already coming due.

“There are many … effects (of climate change), from species extinction to the spread of diseases to a decline in overall food production, but the main point is that these effects are not happening in some dim, distant future. They are happening now. And in response to our growing awareness, there have been some changes in public and political attitudes (though not universal).

“Some acknowledge the situation, but shrug and go about their lives taking a “What can I do?” position. Some merely despair. But only those with their heads stuck so firmly into the sand that they’re talking through their nether ends are still denying that reality has changed.”

Happy Birthday Margaret Atwood, and may there be many, many more.

To read the full article that  Margaret Atwood wrote three years ago on the climate emergency we are now facing, click on – https://www.independent.co.uk/environment/climate-change/margaret-atwood-on-climate-change-time-is-running-out-for-our-fragile-goldilocks-planet-10425406.html

To watch a great interview with Margaret Atwood, broadcast on CBC’s program Q this November 18th, 2019, click on – https://www.cbc.ca/radio/q/from-backwoods-bacon-to-half-hanged-mary-13-things-we-learned-about-margaret-atwood-1.5361066

For More News And Commentary From Niagara At Large – An independent, alternative voice for our  Greater Bi-National Niagara Region – Become A Regular Visitor And Subscriber To NAL At Www.Niagaraatlarge.Com .

“Mr. Cooper’s talent and experience as a conductor could truly take him anywhere in the world and he continues to support local arts and music right here, in our hometown and for that we are grateful.” – St. Catharines Mayor Walter Sendzik

News from the City of St. Catharines

Niagara, Ontario – Earlier this November,  Mayor Walter Sendzik presented the Key to the City to Robert Cooper, artistic director of Chorus Niagara at the launch of his 30th anniversary season with the chorus.

Mayor Walter Sendzik presentes the key to the city to Robert Cooper, artistic director of Chorus Niagara at the launch of his 30th anniversary season with the chorus, at the FirstOntario Performing Arts Centre.

“Mr. Cooper has led a remarkable career, teaching, conducting and amplifying voices across Canada. His talent and expertise in the choral arts has been recognized internationally and it is fitting that we recognize his contributions to the local arts community in St. Catharines with the key to the city,” stated Mayor Sendzik.  END_OF_DOCUMENT_TOKEN_TO_BE_REPLACED