A Very Warm (Can You Believe This?) EIGHTIETH BIRTHDAY  to a Timeless Artist and Activist – Buffy Sainte-Marie

The Canadian-Born, Indigenous Singer/Songwriter Continues, Through Her Calls for Peace, Compassion, and Earth Care, to Offer Humans Some Redemption as a Species on this Planet

If you have ever treated yourself to an evening of Buffy Sainte-Marie in concert, as I have three or four times, there is no way you leave without feeling totally warm inside and inspired to go out in the world and do something to improve the lives of every living species on this oh-so-fragile earth we share.

From her earliest years as a young, upcoming folksinger in Greenwich Village, New York during the heyday of the folk scene in the early 1960s, to her rise and continued success as an award-winning performer and songwriter – not to mention her many appearances on Sesame Street from 1975 to 1981, where she drew new generations of fans – Buffy Sainte-Marie remains a continued beacon of light in our lives. 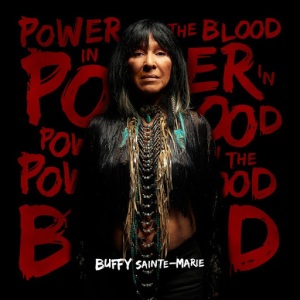 Buffy’s 2015 album Power in the Blood, which one her an American Music Award, and in Canada, two Juno Awards for best album and songwriter of the year. The album also earned her the prestigious Polaris Music Prize. Not bad for an artist almost midway through her 70s at the time.

Her long list of compositions include ‘Until The Time You Say Goodbye’ (covered by Elvis Presley in the 1970s), ‘Now That the Buffalo’s Gone’, and the Academy Award-winning.’Up Where You Belong’ performed by Jennifer Warnes and Joe Cocker for 1980s film An Officer and a Gentleman.

There was also this 1960s, anti-war classic, ‘Universal Soldier’ (covered later that decade by the Scottish folksinger Donovan). It is discussed and performed again, years later by Buffy, and it is fortunately all available  on Youtube. Listen and watch it by clicking on the screen immediately below –

(For the record, Buffy’ says her legal birth certificate has her actually birth date down as February 2oth, 1941, although she has it actually could be give or take a day or two.)

To listen to an 80th Birthday interview with Buffy Saint-Marie on CBC Radio’s Sunday Magazine, originally broadcast this  February 21st. 2021, click on the following link – https://tunein.com/podcasts/Documentary/The-Sunday-Magazine-p492/?topicId=160997580 .