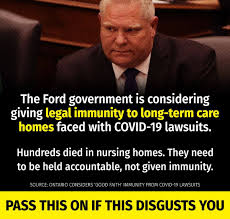 QUEEN’S PARK — Grieving families are speaking out against Doug Ford’s move to shield long-term care chains and his own government from accountability, and Official Opposition NDP Leader Andrea Horwath says the premier must scrap the legislation that would deny them justice.

The Ford government introduced new legislation last week that would make it much harder for families to seek accountability for the suffering of their loved ones at the hands of for-profit long-term care companies. To date during the pandemic, more than 1,900 seniors have lost their lives.

“Families are grieving the loss of their loved ones, or fighting to help and comfort their parents and grandparents who have suffered so greatly during the pandemic,” said Horwath. “They have lived through horrors that no one should have to go through, and now the government is pouring salt in the wound by making it harder for them to get justice. 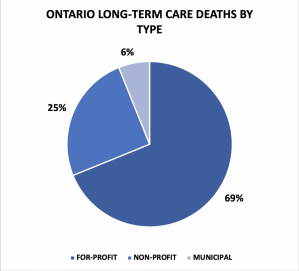 The above chart, produced by unions supporting long-term care home workers in Ontario late this September, shows that 69 per cent of the COVID-19 deaths in LTC homes occurred in ones that are privately owned and operated for profit.

Horwath was joined for a press conference Tuesday morning by Cathy Parkes and Innis Ingram. Both are fighting for justice through the courts after they each lost a parent that suffered in long-term care during the pandemic, so they’re impacted by Ford’s bill, which is retroactive, attacking cases that have already began.

“Cathy and Innis and the thousands of others in Ontario whose loved ones suffered in long-term care during the pandemic deserve justice,” said Horwath. “We should be standing shoulder to shoulder with families as they grieve, vowing to help them hold greedy corporations accountable and committing to change this system forever.

“Instead, Conservative and Liberal governments helped their CEO and lobbyist friends cash in on long-term care at the expense of seniors, and Ford is now helping get those greedy corporations off the hook.”

The Conservatives recently shot down an NDP motion brought forward by Horwath calling on the government to end for-profit long-term care and replace it with a fully public and not-for-profit system.

“This legislation only creates a loophole for negligent long-term care homes. It takes away the accountability families need to help heal after the tragedy of losing people they love.” – Toronto area resident Cathy Parkes

For more on Cathy Parkes and the tragedy her family suffered in long-term care, click on – https://toronto.ctvnews.ca/he-had-no-fighting-chance-daughter-furious-after-father-dies-of-covid-19-in-long-term-care-home-1.4907212

“The residents and families of long term care have, and continue to suffer due to the negligence that has contributed to over 1,900 deaths during the COVID pandemic. This legislation serves to prolong that suffering, and raise more obstacles on the path to accountability and justice that we seek, and deserve.” – Mississauga area resident Innis Ingram

For more on the tragedy Innis Ingram’s family suffered in long-term care, click on – https://globalnews.ca/video/7010972/why-one-man-chained-himself-to-a-tree-to-fight-for-better-long-term-care-conditions