A Song, a Book and a Film Documentary for Our Turbulent Times 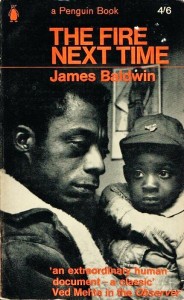 “God gave Noah the rainbow sign. No more water, the fire next time!”       – from the late American author and civil rights activist James Baldwin’s  classic 1960s book-size essay ‘The Fire Next Time’, about the racism that continues to poison life for so many in his native land

“Finally the tables are ready to turn. Talkin’ bout a revolution,”                   – from a song Tracy Chapman  wrote in the 1980s, but that could serve as a soundtrack for the demonstrations continuing  in countries around the world today.

They have filled streets around the world, black and white and every other colour, and so many of them young and fighting for a decent future. There seems no stopping them now. Finally, the tables may be ready to turn.

Since the shocking death of African American George Floyd late this May under the cruel knee of a white police officer, I have heard and read and talked to many people who have been turning to songs, books and movies that speak to the growing call in the United States, Canada and other countries around the world for an end to racial and economic injustice, backed up by cops in riot gear, firing tear gas and rubber bullets, and wielding big clubs.

There are so many meaningful songs, books and films to choose from, and I will only start here with a video performance of one song by American singer/songwriter Tracy Chapman that was released in the 1980s but seems more relevant today.

To hear and watch Tracy Chapman perform the song, click on the screen immediately below –

Now along with his classic book ‘The Fire Next Time’, there is a must-see film documentary called ‘I Am Not Your Negro’, based on the draft for a book James Baldwin did not completely finish and release before his untimely death at the age of 63 in the late 1980s.

Watch this film, including the footage from the 1950s, 60s and 70s of police beating civil rights protesters in the streets and white supremacists waving signs boasting Nazi swastikas and hate-filled words, and you would almost think you were watching the news today.

Here is a trailer for that critically-acclaimed film which I hope you kind find a full copy of. Watch the trailer by clicking on the following screen –

Let all peace-loving people hope that when it comes to racial and economic injustices, the tables are finally ready to turn.

My heart and soul is with the millions of people of all ages, colours, sexual orientations and faiths, marching peacefully in the streets. I hope yours is too.

Trump and his morally bankrupt, hate-filled kind can’t kill us all.

(I might just as well mention a contemporary follow-up book to The Fire Next Time that has also received critical acclaim. It was originally published in 2016 and is called; ‘The Fire This Time – A New Generation Speaks Out’ by Jesmyn Ward and a host of contributors. Jesmyn Ward has recently been interviews a number of times over the demonstrations taking place around the world right now.)