Businesses across Niagara, along with countless numbers people across the region waiting to go back to work, waited with bated breath this Monday, June 8th to find out if Niagara would be on the provincial government’s list of regions given a green light to re-open again.

But when the list of what the Ontario government dubs “public health unit regions” representing towns and cities across the province was released this June 8th, at a news briefing hosted by Premier Doug Ford, a total of 24 regions made the list for “State 2” re-openings and for reasons that has at least a little bit to do with still having too many COVID 19 case outbreaks, Niagara was not on it.

It means that Niagara remains one of the areas of the province, along with Hamilton, Haldimand-Norfolk, Toronto, Halton, Windsor, not eligible for a host of June 12th business and recreational area re-openings (full details on Stage 2 re-openings are available on a link Niagara At Large is including below), and will have to wait for however many more days or weeks longer before that happens.

In a news release circulated by Niagara West MPP Sam Oosterhoff’s constituency office, a statement from Oosterhoff (the only Ford government MPP in the region) is included that works to put the best possible spin on it.

“This announcement is good news for Niagara families and job creators,” the Niagara West MPP is quoted saying in the release, “but it also shows that we must stay vigilant to keep numbers down, and allow Niagara to move into Stage 2.” said Sam Oosterhoff, MPP for Niagara West.

“It is hopeful news, thanks to the work of all residents who have social distanced and made sacrifices to save lives. I look forward to Niagara opening very soon,” Oosterhoff continued. “At the beginning of each week, the government will provide an update on the ongoing assessment of these regions, and whether they are ready to move into Stage 2 at the end of the week.”

Striking a different tone, Mishka Balsom, the CEO of a Greater Niagara Chamber of Commerce representing some 1,500 businesses and organizations across the region, described the news as ‘extremely disappointing’, according an interview she did with a local newspaper.

Weeks ago, Balsom’s Chamber expressed concerns that the future of many area businesses is up in the air due to the pandemic lock down. Some of them may not have the resources to survive.

The reason Niagara’s COVID case counts still remain too high to make the Stage 2 re-opening list is not entirely clear, but a June 8th CBC news report referred to “institutional outbreaks” at Garden City Manor in St. Catharines and Albright Manor in Lincoln among the possible contributors.

In a recent St. Catharines Standard report, Dr. Mustafa Hirji, Niagara Region’s acting medical officer of health, also made reference to a recent outbreak among migrant workers at an agricultural operation in west St. Catharines called Pioneer Flower Farms as another reason why the province decided Niagara is not yet ready for Stage 2 re-openings.

However much the outbreaks at this agricultural operation played a role in Niagara not yet making the list, it was upsetting to read a story on the front page of the June 5th edition of The St. Catharines Standard, reporting that Pioneer Flower Farms did not provide masks to those working in its greenhouse operation because, according to a Pioneer spokesperson, although there is a provincial guideline recommending that workers in relatively close proximity to one another wear masks, there is no government “requirement” that masks be worn.

What is this, I ask. You need the government to “require” you to do it? There are many people across Niagara who, out of a sense of responsibility to themselves and others, are wearing masks when they go to a grocery store, even though they are not required to do so.

As a journalist who, going back to my years as an environment reporter at The St. Catharines Standard, did a good deal of coverage of issues that, one way or another, impacted on Niagara’s agricultural community. And as far back as I can remember, representatives of the agricultural community have fought governments tooth and nail against any move to regulate them around issues involving flood plain mapping, protecting wildlife and our watersheds or the humane treatment of farm animals.

Most governments have typically backed off when agricultural representatives have fought rules and regulations.

But when you have a situation like this, where an agricultural operation says it has not take measures that might help contain the spread of a dangerous virus because it is not required to, I think you are making the case for government regulations.

In fact, this is just one example of something that screams out for government regulations. 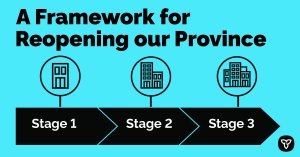 This is what  government regulations are for, which has one asking why senior levels of government didn’t require operations like this to provide workers protective equipment several weeks ago, when COVID state of emergencies across Ontario and Canada were declared?

If a lack of proper requirements for some businesses and industries is contributing to why Niagara has not yet made the Stage 2 list that should anger us all.

Thing of the countless struggling businesses and workers in Niagara who have been hoping for the day when they can re-open and go back to work.

Here is the Ontario government’s June 8th news release on Stage 2 re-openings, and all of the supporting information for what regions made the list and what regions so far haven’t. To visit this information, click on the following link – https://news.ontario.ca/opo/en/2020/06/ontario-permits-more-businesses-and-services-to-reopen-in-the-coming-days.html?utm_source=ondemand&utm_medium=email&utm_campaign=m