A Message of Inspiration and Hope from the late Robert F. Kennedy

A Brief Foreword Note from Doug Draper – Whenever I find myself feeling discouraged by the state of affairs around me, there is a quotation I sometimes turn to by the late Robert F. Kennedy, who died 50 years ago this June 6th after being gunned down the night before, that inspires me to keep doing whatever I can to make things better. 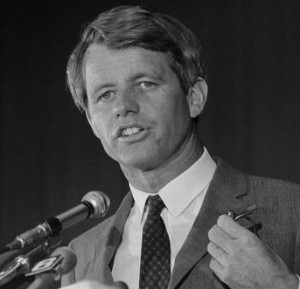 The quotation comes from a ‘Day of Affirmation’ speech the then U.S. Senator Robert Kennedy delivered in South Africa in 1966, when that country was still under the grip of a racist regime and anti-apartheid activist Nelson Mandela was two years in to serving a 26 year jail sentence, and I have always kept it in a frame near me, going back to my earliest years as a reporter at The St. Catharines Standard.

“Let no one be discouraged by the belief there is nothing one man or woman can do against the enormous array of the world’s ills – against misery and ignorance, injustice and violence.

“Few will have the greatness to bend history itself; but each of us can work to change a small portion of events, and in the total of all those acts will be written the history of this generation ….”

“Each time a man stands up for an ideal, or strikes out against injustice or acts to improve the lot of others, he sends a tiny ripple of hope, and crossing each other from a million different centres of energy and daring, those ripples build a current which can sweep down the mightiest walls of oppression and resistance.” – Robert F. Kennedy. 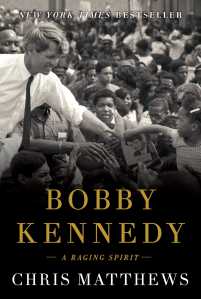 One More Brief Note from Doug Draper – If you want to read a good book about Robert Kennedy – known affectionately by millions as “Bobby” – there is the current best seller by MSNBC news show host Chris Matthews called ‘Bobby Kennedy – A Raging Spirit’.

In the book’s prologue, Matthews asks the question; “What is it that’s missing (in so much of  politics and the way it is practiced) today?”

“Here is my straightforward answer,” Matthews goes on to say. “We’ve gotten so used to treating our politics as zero-sum that we’ve lost the faith that joint action by the people is capable of bringing joint success. Why can’t there be a patriotism that joins us together instead of dividing us? 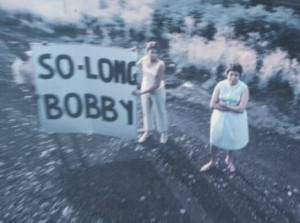 Along the route of the funderal train, from New York City to Arlington National Cemetery outside of Washington, D.C.

“It’s now the accepted wisdom, for example, that the interests of the discarded factory worker and the ignored inner-city youth cannot be met together, so why try? Don’t we need leaders eager to champion the future of both? The faces and salutes of those thousands of Americans, white and black, lining the route of Bobby’s funeral train make for moving testimony to the fact that this country once had a brave figure who they believed could.”

Along the route of the funeral train in June, 1968.