A Brief Commentary by Doug Draper, followed by a Good Story

Okay, so they are no way as cute as a puppy or kitten, but looks aren’t everything

I thought it might be nice to begin the week with a little good news for a change.

Last week I began with a commentary about one of the latest lists of species that have gone extinct, often due to human activities that despoil or destroy the environments they need to survive.

This time I would like to share a short story I received from an old friend in Massachusetts on her Facebook page about people coming to the rescue of a desperately injured Opossum found fighting for its live.

As I said in a note to my friend, this is the kind of story that helps restore some of your hope for humanity.

Here is the story about the rescue of that opossum –

The rescued opossum on the mend

“He (the opossum) had been attacked by another animal and managed to escape. He sustained injuries to his face and right eye.

As if that wasn’t bad enough, he fell into someone’s pool shorty after and was trapped. He was cold, wet and swimming frantically when a caring finder pulled him out of the water.

Wilmington, MA Animal Control officer Sullivan was called out to help. ACO Sullivan was very concerned for this little guy so he brought him to us to be evaluated.

This young opossum was hypothermic and couldn’t even open his right eye due to a bad infection. He was in really rough shape. We dried him off and placed him in an incubator to warm him up. Once he was warm, he felt much better and we were able to treat his injuries and give him a fresh meal.

His eye is slowly improving and his energy level is much better now that the infection is under control.

Thank you to the caring finder and ACO Sullivan for helping this cutie!”

I know there are at least some people out there who have a problem with opossums. They are undoubtedly very strange looking creatures that, as someone once said, look like they were put together from head to tail by a committee.

Yet they are also very harmless animals and one of the few mammals on the planet that do not carry or contract rabies – a fact that has scientists studying them to determine what it is about their bodily systems that protects from that particular scourge. 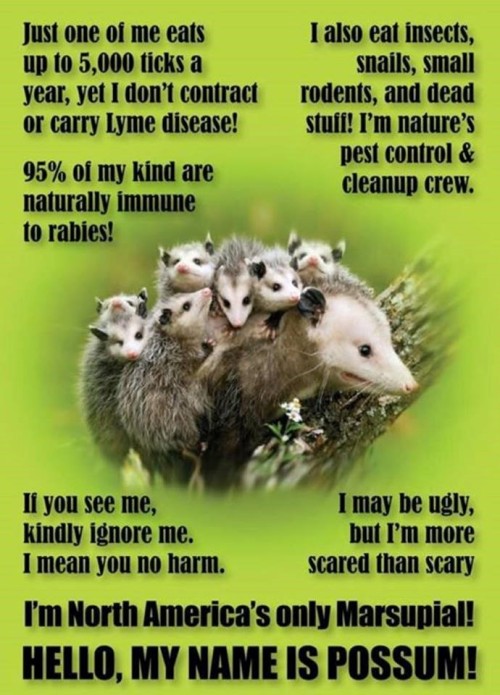 They are also about the only marsupials in North America that, like those kangaroos from way down under, carry their infants in a pouch. And they are nocturnal creatures that have found a way of adapting to our urban environments.

So if, one night, you spot one in your yard don’t be afraid.

One night, many years ago, I was coming home quite late from my old job as a reporter at The St. Catharines Standard and as I turned in to the driveway, the headlights of my car caught site of an opossum looking out of a window of a shed in my backyard.

By coincidence, it happened to be a night or two before Halloween, and the face of the opossum looked back at me, its eyes shining from my car’s headlights and its white furry face looking like a skull from one of those spooky Halloween movies.

That first encounter was a little startling, but he continued to greet me like that night after night and I took to calling him Jake and looked forward to his presence as a wild friend in the backyard.

Opossums are not very good pedestrians, however, when it comes to crossing a street and one day I found him dead, on the road in front of the house.

I retrieved him with a shovel and buried him someplace in the backyard, and every time I see an opossum in the neighbourhood, I still think of Jake.

Yes, I know, it sounds a little crazy. But if you see an opossum, take some time to appreciate this interesting animal, and the good story about the people who cared enough to rescue and nurse one back to health in Massachusetts.

To read the commentary Niagara At Large posted earlier this October on species going extinct, click on – .https://niagaraatlarge.com/2021/10/18/ever-more-species-on-our-planet-keep-going-extinct-how-much-do-we-really-care/