Province to Introduce Legislation to Help Make Ontario the Best Place to Work, Live and Raise a Family

Need a hike in the minimum wage in Ontario? Here’s an extra ten cents an hour.

(A Brief Foreword Note  from Doug Draper at Niagara At Large – Excuse me, but is Monte McNaughton the same Ontario Ford government cabinet minister who, just four weeks ago, had the nerve to slap workers in this province across the face with a ten-cents-per-hour increase in the minimum wage?

All at a time when the wage gap between the upper 10 per cent and most of the rest of us continues widening and the cost of living, including the cost of securing an affordable apartment or home, continues spinning out of control.

It sounds nice that the Ford government now wants to give workers employed by businesses with 25 employees or more a break from being exploited during their off hours via a computer device. And how come I can already see businesses finding clever loopholes or, if they happen to have, as an example, 28 or 32 employees, laying a number of workers off so they are below the 25-employee threshold and, therefore, can go back to exploiting their workers 24/7.

But then maybe this is just me being a little too negative. What do you think?)

Now here is the News Release from the Ontario government –

TORONTO — The Ontario government is introducing legislation today that, if passed, would better protect, support, and attract workers to the province.

These proposed new measures position Ontario as a first mover in charting the path forward as the way people work changes. The proposed changes would promote healthy work-life balance and will further enable competitiveness by banning unfair non-compete agreements that are used to restrict work opportunities, suppress salary increases and wage growth. 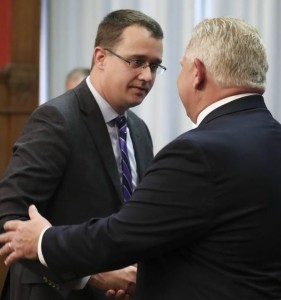 Ontario Labour Minister Monte McNaughton, up close with his boss to the right, Premier Doug Ford

Monte McNaughton, Minister of Labour, Training and Skills Development, will today introduce the Working for Workers Act, 2021, which would help make Ontario the top choice for people around the world to live, work and raise a family.

“COVID-19 has changed the way we work, leaving too many people behind, struggling to put food on the table and make ends meet for their families,” said Minister McNaughton.

“Our government is working for workers. To do so, we must act swiftly and decisively to put workers in the driver’s seat and begin rebalancing the scales. Today’s proposed legislation shows Ontario is ready to lead the way into the workplaces of tomorrow, and create the conditions that will make talented, innovative people want to work in our great province.”

If passed, this proposed legislation would make Ontario the first jurisdiction in Canada to make it easier for people to relax and spend quality time with their loved ones.

By requiring employers with 25 employees or more to develop disconnecting from work policies, Ontario is prioritizing workers’ mental health and family time. These workplace policies could include, for example, expectations about response time for emails and encouraging employees to turn on out-of-office notifications when they aren’t working.

The proposed legislation will also prohibit employers from using non-compete agreements. These types of contracts often restrict employees from taking new jobs with another business in the same field after they leave the company.

The proposed changes would ban this unfair restriction to help workers in Ontario advance their careers and earn more money. This would also give the province a competitive advantage in attracting global talent. Employers would still be able to protect their intellectual property through narrower clauses.

Measures proposed earlier this month will also be part of this legislation. This includes making it easier for internationally-trained individuals to practice in regulated professions, protecting vulnerable workers by establishing a licensing framework for recruiters and temporary help agencies, ensuring washroom access for delivery workers by requiring business owners to allow them to use the washrooms at the businesses they serve, and supporting businesses who continue to suffer from the impacts of COVID-19.

Many of the proposed changes were informed by the recommendations made by the experts of the Ontario Workforce Recovery Advisory Committee, based on their consultations with workers, employers, and unions. These proposed changes complement the work that the government is already doing to improve and expand transportation, virtual care and broadband internet access, making it easier for more people to pursue remote work and make Ontario the “work from anywhere” province.

To read a report from CBC on the recent 10-cent (brother can you spare a dime) increase in the minimum wage in Ontario, click on –https://www.cbc.ca/news/canada/toronto/ontario-minimum-wage-increase-1.6191190 .