Bad News Aside, Harriet Tubman Still Brings Out Much Good In People

The bust of Harriet Tubman was pulled of its pedestal at the Salem, Chapel British Methodist Episcopal Church this past Thanksgiving weekend. The bust was  damaged beyond repair.

A Brief Comment by Niagara At Large reporter and publisher Doug Draper, followed by a Call to All of Us to Help Replace Vandalized Bust of Iconic Civil Rights Activist Harriet Tubman at Historic British Methodist Episcopal Church in St. Catharines/Niagara, Ontario

The news earlier this month that one or more people went on to a historic Afro-Canadian church in Niagara and smashed a bust of the legendary Harriett Tubman was as depressing for me as it was for so many of you who embrace the idea of an inclusive, peace-loving Niagara.

When an act of vandalism like that occurs, I don’t think it is that out of the way to wonder what kind of community or society we live in. After all, we know there are people out there who’s hearts have been poisoned with rage and intolerance toward others.

Yet, at the same time, it is important to know that there are a great number of good people among us who rally together in support of others in the community who have been violated in such an ugly way.

So here is a Call-Out from one of the Church Church members for the funding necessary to have native-St. Catharines artist Frank Rekrut – now operating an art studio in Florence, Italy with his partner Laura – and so far they are very close to meeting the fund-raising goal. 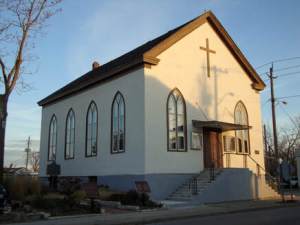 The Salem Chapel British Methodist Episcopal Church in St. Catharines, one of the most historic churches of its kind in Canada.

This fundraising campaign was started to help the Salem Chapel, BME Church NHS in St. Catharines, Ontario replace the Harriet Tubman statue that was vandalized on October 10, 2021.

My name is Natasha Bell. I am the owner and operator of BlackOwned905 and I am a member of Matter of Black. The Salem Chapel is my family church.

I am saddened and sickened that the bust of Harriet Tubman that has graced the church courtyard for 10 years was destroyed. And I know many of you are too.

We can all agree that it was a senseless act of vandalism. Because of this senseless act, the church no longer has the Harriet Tubman statue the members and community were proud of and once cherished.

With so many people asking how to donate right now, I started this fundraiser to help the church members. A quote to replace the statue has been received.
The sculptor, Frank Rekrut will recreate the statue.

The cost to replace the statue using specialty cement is estimated at $11,500 to $12,000 CAD. A bronze statue would cost $13,000 CAD. You can find out more about Frank by visiting his website at: www.theflorencestudio.com .

To visit the site where you can make a donation, click on – https://www.gofundme.com/f/replace-harriet-tubman-statue-at-salem-chapel?fbclid=IwAR1MeBcWrQTJs7U1GDlm2RCCjybVoVN3uTjS1aTA4t3iLOvD8Iz2JpIJ0SU

Alternative donation options are available and listed on the  church website at www.salemchapelbmechurch.ca

To visit a Facebook Page for the Florence Studio, with a brief video of artist Frank Rekrut working on a new bust of Harriet Tubman for this historic St. Catharines church, click on – https://www.facebook.com/florencestudio