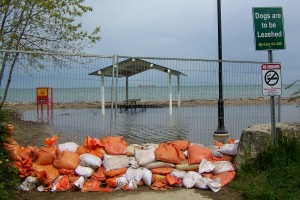 Sandbags holding back the rising and near record high waters of Lake Ontario in 2019 as, for the second or third year in a row, much of the beach area in the Port Dalhousie area of St. Catharines is swamped with water, resulting in costly damage and making the area off limits, for week as a recreational area. Photo by Doug Draper

Niagara, Ontario – Over the past decades or so, Niagara At Large has joined members of the pubic in taking well-warranted shots at municipal leaders across Niagara for taking positions that do more to harm than protect our shared environment.

Indeed, there continue to be examples of municipal politicians in Niagara, taking positions hurtful to what is left of our natural heritage, and Niagara At Large will continue to do what we can to call these politicians out.

And when there are examples of our municipal representatives working together with area residents and other public partners to do something positive for our environment, we need to praise them.

I ‘ve learned well enough, from my decades working as a news reporter, that even the best of our elected representatives find themselves buried in criticism when an issue surfaces that raises pubic ire. When things go right, they all too often hear the sound of crickets.

I have long believed that praising those elected representatives for doing something right can send out just as powerful a message as criticizing them when they do something wrong. There is something to be said for positive reinforcement. 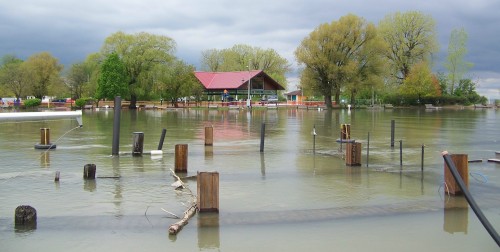 Another look at the Port Dalhousie beach and park area, in 2017, swamped by near record Lake Ontario water levels. Photo by Doug Draper

So during this past week of May, when Niagara Regional Chair Jim Bradley and Pelham Regional Councillor and Chair of the Region’s Planning and Economic Development Committee, Diana Huson, it was great to report that our Regional Government joined hands with the not-for-profit organization Land Care Niagara to plant thousands of trees on the property of the Region’s Decew Water Treatment Plant, near the headwaters of Twelve Mile Creek.

This past Monday, May 31st, it is also good to report that City Councillors for St. Catharines, the largest of Niagara’s 12 local municipalities, voted to approve a detailed ‘Climate Change Adaption Plan” of the city’s own making, outlining a total of 28 action measures the city promises to take at a local level, to help combat a global climate emergency. 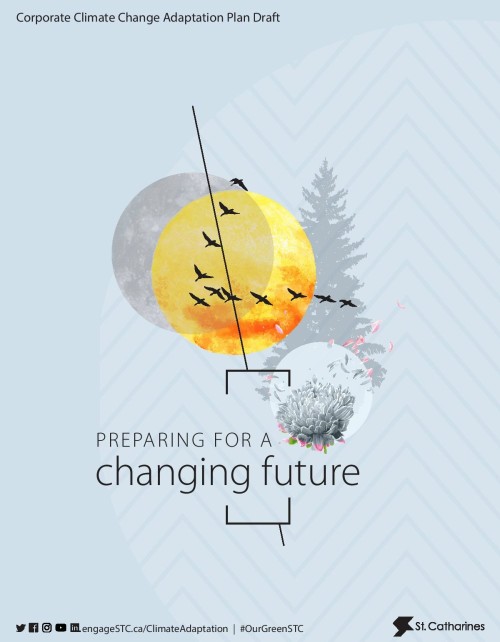 As you can see  in the  draft copy of this St. Catharines Climate Plan, approved this May 31st by the Council, (available for review in a link you can click on below), there are target dates for achieving these action, and a process now being put in place to review progress annually.

Every  other local municipality in Niagara should have a climate plan of its own by now, and so should Niagara’s regional government which is now in the process of drafting one – even though a climate plan at the regional level was passed about a decade ago when Gary Burroughs was the Region’s Chair, before it was buried later on by the right-wing Caslin administration.

So here it is to the City of St. Catharines for being a leader on the climate file in Niagara. Let us all take time to give the city’s Council some credit for that.

To read a recent report in Niagara At Large on the mass planting of trees on the sprawling property of Niagara Region’s Decew Water Treatment Plant, click on – https://niagaraatlarge.com/2021/05/26/planting-trees-for-our-future-niagara-region-at-its-best/