As If Things Aren’t Bad Enough in Trumpland, The Irreplaceable Ruth Bader Ginsburg Has Died

A Brief One by Doug Draper at Niagara At Large 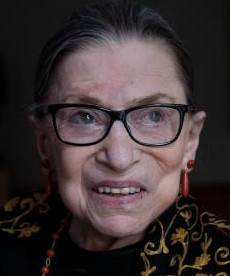 Posted September 18th, 2020 on Niagara At Large For all of us on the Canadian side of the border who understand – and we should understand that what happens in and to the United States affects us too – here is some dark and disturbing news – as if there hasn’t been enough awful news coming out of the United States in recent times. Ruth Bader Ginsburg, a justice on the U.S. Supreme Court and possibly the most powerful liberal voice for women’s rights, civil rights and related issues around fairness and justice for all, has died this September 18th at age 87.

Shortly after the Clinton administration appointed her to the U.S. Supreme Court

I don’t know how many of my more liberal, progressive-minded friends in the United States, knowing Ginsburg has been continually battling complications from cancer in recent times, have been praying that the great lady would at least hold on until Trump is gone.

But Trump isn’t gone, and one can almost imagine that this monster of a man and his enablers are working now to see if they can wedge in a new appointment to the Supreme Court before this November’s presidential election – a person who will be totally loyal to Trump and a Republican Party that shows total disdain for the rights of everyday people and the institutions of democracy.

I feel the same way about the loss right now of Ruth Bader Ginsburg as I do about the loss earlier this summer of American civil rights icon John Lewis – ‘You are among the last people in this mad world that we can afford to lose right now.’

God help us all.

Here is one account of this sad news, just posted by Rolling Stone magazine –https://www.rollingstone.com/politics/politics-news/ruth-bader-ginsburg-dead-777835/

Here is a great trailer for a documentary on Ruth Bader Ginsgurg, called RBG, that my wife and I were fortunate enough to see when it came out with some friends of ours on a big screen on Cape Cod, Massachusetts. To watch it, click on the screen immediately below –