So Why Do So Many of Our Politicians Keep Pushing to Build Them?

A Commentary by Niagara At large reporter and publisher Doug Draper, followed by a Statement from the Canadian citizens group, Environmental Defence

It’s disturbing how many of our elected people across Ontario, including some right here in Niagara, are still chomping at the bit to construct more great big, honkin’ multi-lane highways.

How much more of this do we need in a 21st century marked by a global climate emergency and other threats to life on this planet?

Even in an era where we face, among other crises, a full-out global climate emergency, we have politicians out there, stuck waist-deep in the asphalt of the last century, determined to build more highways in the name of liberating more space for petroleum-guzzling trucks and cars.

Never mind the woodlands, wetlands and farmlands that are destroyed, we need more multi-lane highways, they argue, to address the congestion on highways that are already there.

It’s like that insane person who keeps banging their head against a concrete wall and never wakes up to realize there might be other options.

The late great Lewis Mumford, an American hsitorian and sociologist, and a true visionary when it came to sustainable urban planning and transportation,  once said that “adding highway lanes to deal with traffic congestion is like loosening your belt to cure obesity.”

Yet even here in Niagara, Ontario, every once in a while one of our municipal, provincial or federal politicians keeps trying to resurrect this late 20th century idea of building a “mid-peninsula highway” cutting southeast from the Hamilton area and south of the Niagara Escarpment, through a major food-growing area and watershed in this region, and why? 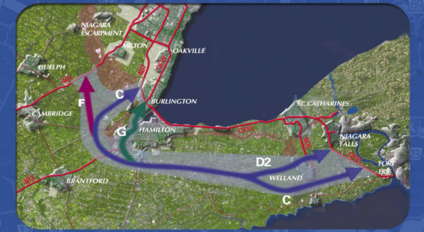 Like a toilet that keeps backing up, there are some politicians out there who just can’t seem to give up on the idea of building another multi-lane highway through the heart of Niagara. The idea of a “mid-peninsula highway’ – see sine proposed paths for it on the map above – continues to surface around tables where politicians meet to this day.

Well, to address the congestion problem on stretches of the Queen Elizabeth Way (QEW) below the escarpment, to the north, that probably never should have been built through one of Canada’s only tender-fruit growing belts in the first place.

Most of these politicians – most of them older individuals who grew up in an era when owning and driving cars was synonymous with life, liberty and freedom – are probably never going to change their way of thinking, which is why I continue to encourage more young people to vote in elections and to run for public office.

I can’t honestly remember the last time I heard a person under the age of 40 say something like; “I know what we need. More highways.”

A Statement from Environmental Defence’s Program Director, Keith Brooks, on the announcement of the preferred route for the GTA West Highway

Toronto, Ontario – The announcement this past Friday, August 7th, confirming the preferred route of the GTA West Highway, otherwise known as Highway 413, is disappointing. Ontario does not need another 400-series highway. This destructive plan will destroy communities, damage the environment, and deliver essentially no benefit to commuters.

An expert panel appointed by the provincial government determined in 2017 that “a proposed highway in the GTA West corridor is not the best way to address changing transportation needs.” Their modeling showed that the proposed Highway 413 would save drivers a mere 30-60 seconds per vehicle trip.

Meanwhile, the 170 metre-wide corridor would see a strip of concrete and asphalt rip through the Greenbelt in Vaughan and across the Whitebelt in Caledon and Brampton, and pave over a couple thousand hectares of prime agricultural land. It would also cut through the headwaters of the Credit and Humber Rivers, crossing rivers and streams approximately 53 times all told.

The highway would cause more urban sprawl, put more cars on the road, and lead to more carbon pollution and air pollution in the communities through which it would pass. Transportation is the largest source of carbon emissions in Ontario.

In addition, recent modeling estimated that pollution from traffic causes almost 900 premature deaths per year in the Greater Toronto and Hamilton Area (GTHA). We don’t need another highway, more cars, and more pollution.

The government should listen to the evidence and the advice of experts and cancel the planned Highway 413.

About ENVIRONMENTAL DEFENCE – Environmental Defence is a leading Canadian advocacy organization that works with government, industry and individuals to defend clean water, a safe climate and healthy communities.