“I would just love to have the country opened up and just raring to go by Easter (this coming April 12th),” Trump told his partners  in manufacturing “alternative facts” at Fox News this March 24th. “So, I think Easter Sunday, and you’ll have packed churches all over our country. I think it would be a beautiful time. And it’s just about the timeline that I think is right.” 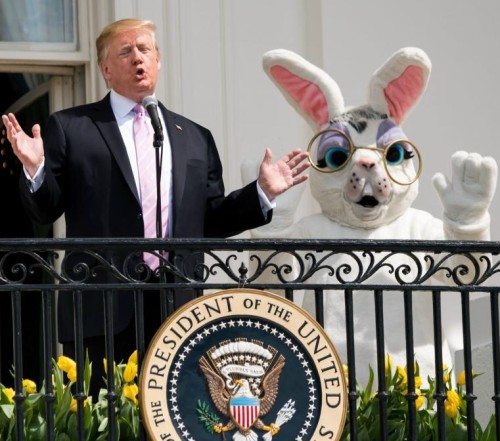 All Trump wants is another Easter like this again. Who is that dressed up in the bunny suit, Mike Pence or Donald Jr.?

All I can say from this Canadian’s perspective is this; Thank God the Canada/U.S. border is closed to everyone and everything but essential crossings now. 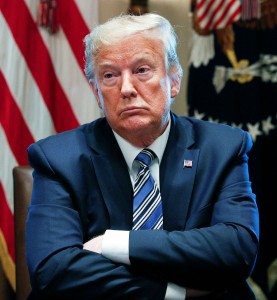 Poor Trump. He hasn’t played golf for days now or held one of those zany rallies for weeks. And all of this talk from infectious disease experts that this coronavirus many be around for months is really starting to bum the self-described “stable genius” out. So time to open the country again – just in time for Easter!

The last thing that anyone on this side of the border who is being responsible and staying home and practicing social distancing to contain the spread this killer virus needs right now is millions of Americans – and unfortunately, there are millions of them – who believe this nut bar so much they would follow him to the gates of hell crossing the border and further spreading the coronavirus here.

In a news briefing New York State Governor Andrew Cuomo held before Trump made these insane remarks about relaxing the stay home rules and opening the country back up by Easter so it can get back to business, Cuomo rightfully said of anyone not practising social distancing; “It’s insensitive, it’s arrogant, it’s self-destructive, it’s disrespectful and it has to stop now. This is not a joke, and I am not kidding.”

Cuomo might just as well have been talking about the reality TV show con man who not so long ago was calling a coronavirus that was already killing people in other parts of the world a “hoax” before comparing it to a “mild flu,” then saying “a miracle” may flush it away.

Apparently one of his most zealous supporters, the evangelical nut Jerry Falwell Jr. – a self-proclaimed “good Christian” who, like fellow tent-rival con artist Pat Robertson, famously blamed feminists, gays and pro-choice activists for the 9/11 terrorist attacks – is already summoning tens of thousands of young students and their teachers to return right now to his Liberty University campus in Lynchburg, Virginia.

The Grand Princess arrives in San Francisco on Monday, March 9, 2020. The cruise ship, which had maintained a holding pattern off the coast for days, is carrying multiple people who tested positive for COVID-19. (AP Photo/Noah Berger)

Hey, Reverend Falwell, how about holding your classes on that ill-fated cruise ship, the ‘Grand Princess’, instead? Apparently the last of its coronavirus victims are about to disembark, and we can push you and your fellow Trumpies far enough out to sea that we won’t have to include you in the COVID-19 case count. The president would like that. Better for the stock market.

And here is the best part. When out are out there, there is less of a chance of infecting the rest of us. And maybe Trump can come out and do a rally.

But getting back to Easter, the New York Daily News, a tabloid in the Big Apple area that has done some excellent front page features on Trump in the past, published a fabulous front page this March 25th that just about says it all.

As I was wrapping up this rant on the state of leadership at the federal level in the United States, a Niagara At Large reader, Joe Gibbons, r sent a comment to a previous post on our online news and commentary site that reads as follows; “Toilet tissue with Trump’s face on every sheet is available from Amazon. Unfortunately Amazon is not shipping this great product to Canada.”

I saw some of this Trump toilet paper in a store I visited on Cape Cod, Massachusetts last fall and it was selling like hot cakes then.  A cashier in the store told me they could hardly keep it in.

Just imagine how well toilet paper with Trump’s face on it would sell now – especially when toilet paper is in such short supply with people hoarding the stuff. At this point, I bet even some of those characters who pop on those red hats and line up for Trump’s rallies would use it.

Enough of the toilet talks though.

Let me sign off on a higher plane with a few words of wisdom from Leonardo da Vinci that may be worth giving a little thought to right now, especially across the border – “Blinding ignorance does mislead us. O! Wretched mortals, open your eyes!”

For More News And Commentary From Niagara At Large – An Independent, Alternative Voice For Our Greater Bi-National Niagara Region – Become A Regular Visitor And Subscriber To NAL At Www.Niagaraatlarge.Com