Government of Ontario is proposing to open up hunting of wolves and coyotes across the north.

Ontario’s Ford Government is moving to put more of province’s wolves and coyotes in the cross-hairs. An Ontario Naturephoto of Grey Wolf cubs.  Photo by John Pitcher

Why are these wolves being scapegoated? Why, indeed, when there is no scientific evidence to justify Ford’s proposed cull? Ontario Nature photo by Douglas Sprott

Without a shred of supporting scientific evidence, the Government of Ontario is proposing to open up hunting of wolves and coyotes across the north.

They claim that it’s to address the declining moose populations. But the evidence doesn’t add up.

Read our latest blog at  <https://ontarionature.thankyou4caring.org/page.redir?target=https%3a%2f%2fontarionature.org%2fontario-hunting-wolves-coyotes%2f&srcid=39969&srctid=1&erid=4366261&trid=1499c478-c46c-47ab-ab2f-2d38cbaa2c36> to learn more about the reasons why this proposal should not go forward.

Wolves, coyotes and moose have lived together in a complex predator-prey relationship for thousands of years.

This relationship naturally regulates itself, benefiting each species and the ecosystems they rely on.Wolves and coyotes play an important role in nature.

Click on the following link to join in registering your opposition to this proposal –  <https://ontarionature.thankyou4caring.org/page.redir?target=http%3a%2f%2fontarionature.good.do%2fwolvesandcoyotes%2fSign%2f&srcid=39969&srctid=1&erid=4366261&trid=1499c478-c46c-47ab-ab2f-2d38cbaa2c36>

Let the government know that Ontarians expect wildlife policy and management to be based on science.

The senseless slaughter of wolves and coyotes is unacceptable. 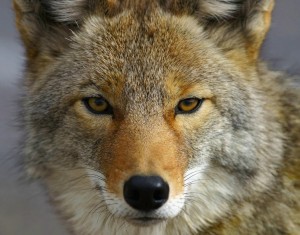 A coyote, up close – one of the world’s great furry faces.

If the government proceeds as it is planning, anyone with a small game hunting license in northern Ontario will be able to kill up to 2 wolves per year.

There will be no limit to the number of coyotes shot.

Requirements for tags and reporting for both wolves and coyotes will be eliminated (a tag authorizes a hunter to hunt the species indicated on the tag and requires reporting back to the government).

Please join Ontario Nature in opposing the proposed changes to wolf and coyote hunting regulations in northern Ontario. Let the government know that Ontarians expect wildlife policy and management to be based on science.

The senseless slaughter of wolves and coyotes is unacceptable.

About Ontario Nature and its Mission –

Ontario Nature is a conservation organization that protects wild species and spaces through conservation, education and public engagement.

Ontario Nature is a charitable organization representing more than 30,000 members and supporters, and more than 150 member groups from across Ontario.

Since it was established as the Federation of Ontario Naturalists in 1931, Ontario Nature has been a champion for nature in Ontario.

Our vision is simple: An Ontario where nature inspires and sustains us for generations to come.

For more information on Ontario Nature and its work to conserve our natural heritage, visit the organization’s website by clicking on – https://ontarionature.org/ /

If there is any doubt left that we have our own version of Donald Trump in the Premier’s office in Ontario, that doubt can only be lingering in the minds of those who voted for Doug Ford in the first place.

Yet even many of them must, by now, be regretting their vote for him when they see more and more of  the services they need, whether it be day-care services for children or long-term care homes for seniors, ambulance services, education, and on and on, being slashed, then finding out that this June (just as one example) Ontario residents experienced the longest waiting times for emergency services in hospitals in the province’s history.

And why? To save tax money?

The Financial Post, a decidedly conservative newspaper in Canada, reported just this week that provincial spending has actually gone up since the defeat of Kathleen Wynne’s Liberals in June of last year. So where is the money going while services for some of the more vulnerable people in Ontario are being cut and some of the wealthiest individuals and corporations in Ontario have enjoyed reductions in their taxes?

Then there is chop after chop to environmental budgets and to programs for protecting and preserving what is left of our natural heritage.

Ford and company have cut money for flood management, even as communities in Ontario have suffered record flooding damage. They have slashed funding for planting trees, weakened Ontario’s endangered species protection legislation, and on and on.

And now this perfectly outrageous business of going after wolves and coyotes on very questionable grounds that they are responsible for dwindling numbers of other species. Only  someone like Doug Ford – an ignoramus  who dropped out of college before finishing his first year – would float such a simple solution to a very complex problem that includes an examination of human activities in losses of species and  habitat necessary for their survival.

As a veteran journalist with years of experience covering environment issues, and as a citizen in this province with a young daughter I hope can have a health and prosperous future here, it is deeply disturbing to consider that we have to put up with three more years of this ignorant and dangerous individual in the Premier’s office.