There are reports out there that people are not participating as excessively as they once did in the insane level of consumption that has come to dominate the Holiday Season over the past 50 or so years.

Growing numbers of people – especially younger people who are being screwed by greed anyway, and are not granted the opportunities past generations were to a livable wage or affordable home – are saying humbug to the kind of pushing and shoving in feeder lines at the box store, and the trampling over of old people with walkers and shopping clerks for discounts on smart phones or flat TV screens.

Growing numbers of people are saying NO to  those sneakers with the lights in them that one of my favourite cultural critics, George Carlin, often pointed to as a metaphor for mindless consumption, and for the possible downfall of humanity and intelligence on this planet.

I believe that this is a good thing if we use some of the time we might have spent standing in cash-out lines talking to one another, trying understand one another, and thinking about what we might do to work together to make a better world for all of us.

I will leave you with that and with one of my favourite songs for this time of year by one of Canada’s greatest gift to the world of music – singer/songwriter Joni Mitchell, who turned 75 live past fall .

Finally, and just to show, once again, that there is some sanity south of Canada’s border – embodied in a good many good people in America who are resisting the dangerous and destructive poison that is Trump and the greed and hate machine that has become the modern-day Republican Party – there is a church in Tulsa, Oklahoma that has surrounded a nativity scene with a chain-link cage and posted a sign out front that says; “The Holy Family was a Migrant Family.”

The nativity scene at a church in Tulsa, Oklahoma 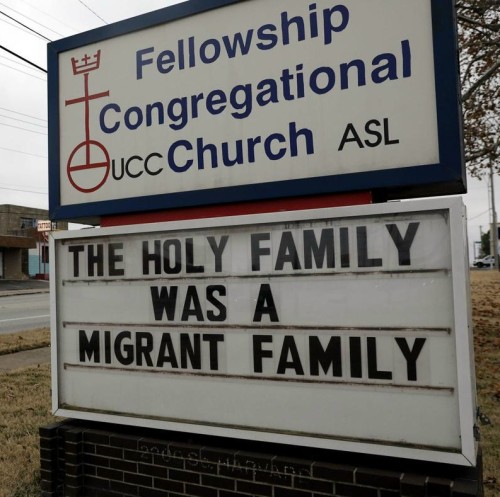 That is just one beacon of hope among many, if we take the time to go looking for them and create some of our own.

(By the way, we could use more of that sanity up here in Fort Nation these days.)

Here is a gift idea for the Holiday Season. How about working together to pass on the gift of a peaceful, healthy planet to future generations?

With Hope for a Brighter Future, Doug Draper