Who Was Ultimately Responsible for Cutting this Guy the Cheques?

Like all of his fellow members of Niagara regional council – save for the chair who serves full-time – Andy Petrowski receives an annual base income for the part-time position of between $32,000 and $33,000. 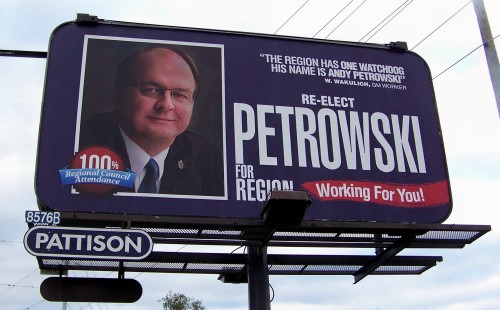 A campaign billboard sign in 2014 for St. Catharines regional councilor Andy Petrowski plays the incumbent candidate up as Niagara Region’s “one watchdog … working for you.” File photo by Doug Draper

But somehow the St. Catharines regional councillor – who has openly identified himself as a “watchdog” for Niagara’s taxpayers during his almost two terms on the council – managed to rack up a total of $112,866 in 2017 when all of the mileage, conference fees and other expenses were included with his remuneration.

The additional $72,000 and change, on top of his remuneration puts Petrowski at the top of the list for total expenses of all 31 members of council, including the regional chair, Al Caslin. It is quite a feat considering that he was off on leaves of absence from the council for almost three months last year – following controversies over his conduct as a councillor – and remains off now, until at least this May.

The remuneration and expense totals for Petrowski were included on a chart, along with those of everyone else on the regional council that was included in the agenda package for this past Wednesday, March 7th’s meeting of the Region’s corporate services committee. Interestingly enough, the figures on the chart did not command even a minute of discussion or debate during a meeting that was about two-and-a-half hours long.

Niagara At Large will have more to say about the figures in this chart and the expenses of  some of the other regional councillors in the days ahead. But if you want to review the chart now, go to the agenda for the March 7th meeting of Niagara Region’s corporate services committee by clicking on – file:///C:/Users/owner/Desktop/csc-agenda-march-07-2018.pdf  – then scroll  all the way down to Page 344.

In the meantime, I believe we who pay taxes to Niagara’s regional government should be asking the same question some were asking when news emerged a few years ago about the outrageous amounts of expenses being racked up by a member of Canada’s Senate, Mike Duffy.

One could blame Duffy for making such unreasonably high expense claims, but who was responsible for approving them and writing out the cheques. Certainly they can say; “Hey wait a minute. There is no way we are covering all this!”

May it is the person or persons ultimately responsible for approving the claims that should be on the hot seat or even be fired out of their jobs!

So who at the top of the food chain at Niagara Region is ultimately responsible for this?

And by the way, doesn’t some of the responsibility and blame have to go to the people out there who vote these people in?

More on this on Niagara At Large in the days ahead.

For a related story on this issue in the March 8th edition of The St. Catharines Standard, click on – https://www.stcatharinesstandard.ca/news-story/8316152-petrowski-claims-biggest-share-of-council-expenses/ .