Crown Withdraws All Charges Laid against Marineland by Ontario SPCA

In a separate statement, the Ontario Society for the Prevention of Cruelty to Animals expresses  ‘extreme disappointment’  in Court’s decision

A News Release from Marineland in Niagara Falls, Ontario followed by a brief response from the Ontario SPCA

The full text of a News Release from Marineland –

Niagara, Ontario – Marineland has been cleared of all charges laid by the OSPCA (Ontario Society for the Prevention of Cruelty to Animals). The charges were formally withdrawn on Thursday (August 10th).

In addition to the reputational damage suffered by Marineland as a result of the charges that were withdrawn, Marineland has also suffered five years of baseless accusations by ill-informed, radical activists.

When Marineland responded to the January 2017 charges we said:  “The OSPCA is continuing a publicity campaign at the behest of a band of discredited activists with little relevant expertise or knowledge, in an effort to avoid further embarrassment related to an ongoing investigation into the OSPCA’s perceived failure to protect animals that is being led by the same activists they are now firmly in bed with.”

Marineland stands by that statement.

We also said then:  “Marineland looks forward to the OSPCA laying out their case in court, where facts matter and there is an objective measure of reality that has not been seen in the basis of their charges or the supporting documentation. We will hold the OSPCA to the high standards of Ontario’s legal system and require them to defend their charges to the fullest extent possible.” 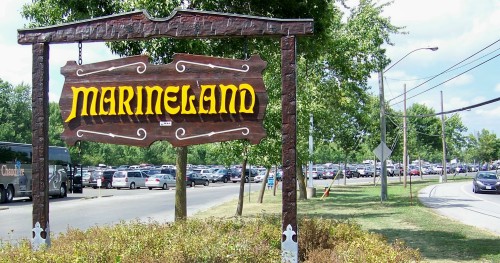 Marineland’s sprawling parking lots are typically packed with cars and buses during the spring and summer months. File photo by Doug Draper

The Crown conducted its own independent review of the OSPCA charges and has effectively agreed with Marineland by determining all the charges ought to be withdrawn.

The OSPCA literally prepared the first of these charges on site, after spending a single afternoon executing a search warrant and viewing more than 4,000 animals across more than three hundred acres at our park.

The OSPCA did not remove or isolate any of the 4,000 animals, despite laying multiple charges.

Following the laying of the charges, the OSPCA issued multiple press releases. They then posted that same information to the Internet platforms they actively fundraise from.  They also organized and conducted a news conference to publicize the laying of the charges. Marineland expressly requested to listen in to the press conference and the OSPCA refused that request.

Marineland was unnecessarily made to suffer severe reputational damage at the hands of the OSPCA’s publicity and fundraising machine.

As a matter of practice, Marineland now audio and video records all OSPCA inspections of the park to ensure an accurate record of the inspections and conditions of the animals and the park.

Following the laying of the charges, the OSPCA conducted a full two-day inspection, that was audio and video recorded, of the very same animals and enclosures, and found no issues of concern.

What follows is the full text of a statement, released this August 10th, 2017, by the Ontario Society for the Prevention of Cruelty to Animals –

The Ontario SPCA conducted a thorough investigation in this case. The decision to drop all the charges was one made by the Crown, stating 3 were withdrawn because it was not in the public’s interest and the balance were dropped as there was not a good prospect of a conviction.

The Ontario SPCA was not aware of this decision until after the court proceeding. We are extremely disappointed in this outcome and feel that this matter is of public interest as all animals rely on humans for appropriate care for their general welfare and the public demands this.  You will have to contact the Crown as to why they made the decision that they made.

If anyone has any concerns for the welfare of the animals at Marineland, we encourage the public to contact 310-SPCA to report the new information.

For more information on the Ontario SPCA, click on – http://ontariospca.ca/about-us.html .

A protest in front of Marineland on opening weekend in May of 2016.  File photo by Doug Draper