The virtual ceremony was hosted by the Honourable Elizabeth Dowdeswell, Lieutenant Governor of Ontario and John Ecker, Chair of the Ontario Heritage Trust. Niagara Parks Chair April Jeffs accepted the award on behalf of the organization.

Built in 1905, as the “Canadian Niagara Power generating station”, the Niagara Parks Power Station is the only fully intact decommissioned hydroelectric plant of its period left in the world.

The preservation of the one-of-a-kind facility was the first consideration in all decisions related to the adaptive reuse construction, which encompassed a comprehensive strategic conservation plan and over 75 unique construction projects. 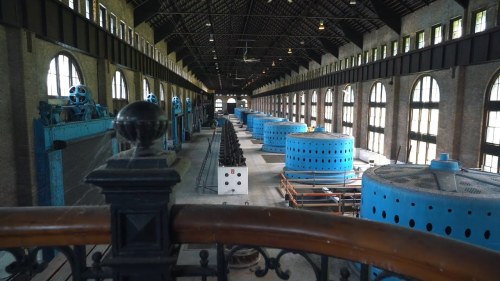 A look inside the Power Station

Since opening in July of 2021, the Niagara Parks Power Station has received consistent praise from its visitors, who are able to explore the historic generator hall, that in many respects, is untouched from its construction over 100 years ago.

“It is a tremendous honour for the Niagara Parks Power Station to be recognized with this award from the Honourable Elizabeth Dowdeswell, Lieutenant Governor of Ontario” said Niagara Parks Chair April Jeffs.

“This adaptive reuse project exemplifies Niagara Parks commitment to fulfilling our mandate for cultural stewardship along the Niagara River and we are so proud that this important historical site will be preserved for future generations to enjoy.”

The Niagara Parks Power Station continues to provide unique public programming for those interested in learning more about the station’s history and the future of hydro power generation in Ontario.

Beginning on March 6, the Niagara Parks Power Station will host a new season of its popular History of Power Speaker Series. The first session, Women in STEM, features a panel of outstanding women in the fields of Science, Technology, Engineering and Math. Attendees will learn about their areas of expertise and find out what it’s like for women working in the field of hydroelectric power.

The full series schedule is included below.

*   May 1: Looking Ahead to Upcoming Expansion Projects

Tickets for the series are $75 and provide access to all three, interactive sessions with experts and former power station employees.

Tickets also include complimentary parking and daytime admission to the Niagara Parks Power Station. Each session runs from 1:00 p.m. to 2:00 p.m.

Tickets and additional information are available at niagaraparks.com/historyofpower<http://click.agilitypr.delivery/ls/click?upn=gwl1xlTUDC887yk79rCWy-2BZUo-2FH3AFCFqDspkmkOO8r6mlpS-2B8uYAs80XV-2Fu9SM7vqSFRm2vYtsqlyjbveBh-2BcJKIcdKjeHHf7Rju0mrx8oHyRbzbr-2F8tCzTS-2B0gzFEfwpB1_T3C9ndn461-2BC5zK8czUXE0DNpquXneBBoSIpGKShAn0Zwv8Bzx2S0X4bXynoqsnDvr7vnOavdelwjfOluT90BI-2F2ADQO-2FvJN-2BMzMdWQjB4ZIDzjdcHzeweYIvoedu-2F1lbPDngQLrwrErdWqHQh6BHoq9C7jjP-2FKPnBOzQIdK5nEuBPPHa-2FV3KYuhbD-2FnxMqKdRQR2qRTGlaSOd3-2BhxaRrfpyT8ItH-2Fyhkr3SufXC6ToZujrOXBMB-2FKRlSVVQAlHjKmcCjV8n3qTc5WH57ZFVctgI68ixkOXK17kZfNplJiaCJpD4drwUomtNfEPofoiRX-2FN0kXeZwq4DFAM4x5aT9kwDIO6-2B8qHE2cItOE2NjQAbR-2FofTshVXdFcoKa-2FOmZoffyp-2FEb1u6DLsMSz5kJZlg-3D-3D>

To connect with other Niagara Parks activities, click on ]<https://www.niagaraparks.com/>

To watch a brief video of introduction to the Niagara Parks Power Station, click on the screen immediately below –