“Ontario has seen a total of 724 fires this season as compared to 414 last year. The 10-year average is 458 fires by July 18 annually. This increase is extremely troubling.”

An Open Letter from Members of Ontario’s NDP Caucus

A Brief Foreword Note from Doug Draper At Niagara At Large –

Yes, the young climate activist Greta Thunberg is right. “Our house – the only place we have to live in this universe – is on fire.”

While these raging wildfires are occurring in northern Ontario and not here in the Niagara area, don’t think for a minute that they don’t significantly impact us.

We will all – and that means every single one one of us who have property or car insurance – end up paying higher premiums to cover the countless billions of dollars’ worth of damage caused by these fires. And  fire-fighting resources across southern regions of the province are being deployed to help combat these blazes, making for less resources in the event of emergencies here. .

Meanwhile, we have a Ford government that has never taken the climate crisis that is leading to more frequent and severe episodes of wildfires, floods, life-threatening winds and other costly climate –related disasters seriously and probably never will.

It is simply NOT in the DNA of today’s Conservative partisans in Canada – provincial or federal – to take environmental threats like this seriously.

That is one of the reasons why, in the spring of 2022 when Ontario has another provincial election, a major of Ontarians have got to fire this Ford government out of power.

One way of illustrating the dangerous thinking of right-wing Conservatives in Ontario and across Canada around the climate catastrophe we are now facing. Canada’s federal Conservatives cannot even agree – in the year 2021 – that climate change, fueled by human activities, is “real.”

We are writing (this July 22nd) to request that you take immediate action on the fires burning across the North. Fire is threatening the safety of families and communities in Kiiwetinoong.  Five First Nations are in the process of evacuation and more are on standby.

As of July 21, there were 166 active forest fires (https://www.ontario.ca/page/forest-fires#section-5 ) burning across the Northwest, the majority of them in Kiiwetinoong.

We are asking you, Premier Doug Ford, to send more help and to declare a state of emergency now. More resources on the ground are needed, without delay, in order to successfully fight these fires and make communities safe again.  This includes more helicopters, water bombers, and more firefighters.

We are thankful – and local leaders are thankful – for the dedication and support provided by the firefighters who have travelled from other parts of the province, and Canada, and even farther away, such as Mexico.  However, with the increasing severity of wildfires each year we need more local firefighting capacity here, and the firefighters we do have in the North need seamless re-certifications. This requires your political commitment to do this so the resources can be in place for when this happens again – which it will.

The continuing loss of wild life habitat, biodiversy and human habitat is beyond tragic. Ford Conservatives would rather pay this cost than whatever it costs to protect our environment. In the long-run, the cost of protecting our environment would have been a bargain.

Ontario has seen a total of 724 fires this season as compared to 414 last year. The 10-year average is 458 fires by July 18 annually. This increase is extremely troubling.

Vulnerable people and families, especially in fly-in communities, need help to leave their homes, and to be flown out of their communities and into nearby locations for safe shelter. You must not leave them on their own.  They need immediate support to find evacuation locations as close to their home communities in Northern Ontario as possible due to the wraparound supports that those from fly-in communities require.

Our offices have been hearing from communities that are doing the work to safely evacuate their people that they have been informed that there is not enough air support or beds for evacuees.

Without any action from you today Premier Ford, these fires will only become a greater humanitarian, health, and climate disaster for the people of Northern Ontario.

As the Premier, you must do everything to ensure that these fires do not grow larger and to take further measures using the resources of the province to ensure the safety of Ontarians and protection of property. That’s why we’re requesting that you come to Red Lake and see for yourself the devastation this has wrought and why more resources are required.

Given the urgency of this situation, we look forward to your prompt response. 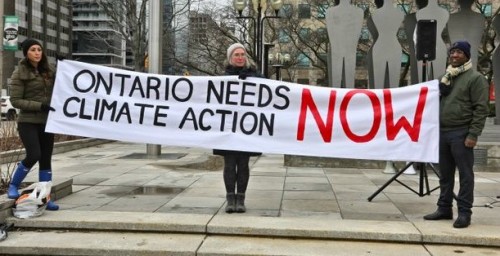 When will we wake up and act?