Watchdog or Lapdog – What Ever Happened to Environmental Protection in Ontario?

“For almost two years, a citizens group, The Coalition for a Better St. Catharines, has been urging the (Ontario) Ministry (of Environment, Conservation and Parks) and the City to get this site cleaned up and, in the interim, monitor the perimeter for any leakage of contaminants off the site

“Yet when asked in early 2020 about possible leaks of contaminants from this industrial site, the Ministry of Environment, Conservation and Parks (MECP) stated that the site was secure and there was no evidence to the contrary.”

An Editorial from the Coalition for a Better St. Catharines, a coalition  ‘advocating for a better City for all’

What the Ontario Ministry of Environment, Conservation and Parks seems to look like under the jackboots of the current Ford government. This once proud Environment Ministry has turned into a sad joke of what it once was going back to the Ontario governments of Conservative Bill Davis and Liberal David Peterson.

If there was ever a wake-up call for St. Catharines residents who believe their health and environment are safe from exposure to of toxic industrial wastes, it’s the fact that the Ontario of Environment, Conservation and Parks (MECP) has identified “very high PCB concentrations in water” [1] coming from the former GM site.

After being practically ignored by our Ministry of Environment, the site is now a beehive of activity.

“There is an ongoing discharge of water from the site with unacceptable levels of PCBs” MECP Comments on MTE Draft Technical Memo (April 9, 2021)

In November and December of 2020, MECP detected high levels of toxic chemicals in the surface water at the GM Manhole STE-53 located on the east side of Ontario Street at the former GM site at the intersection of Pleasant Ave. and Thomas Street.

The location of this detection is steps from the Haig Bowl, Alex Mackenzie Park, and a Day Care centre. This manhole is connected to the City’s stormwater drains and empties into Twelve Mile Creek.

Metals such as cadmium, chromium and uranium were detected in quantities exceeding the Provincial Water Quality Objectives (PWQO).  PCB levels were detected that were 908X the PWQO, the Province’s standard for determining safe levels of industrial contaminants.

PWQO are set at a level of water quality which is protective of all forms of aquatic life and all aspects of the aquatic life cycle during indefinite exposure to the water. PWQO provide a baseline for assessing surface water quality and act as a simple measure of ecosystem health.

Large PCB exceedances were found when tests were conducted in both dry and wet periods leading to the Ministry’s conclusion that the discharge was not only significantly higher than the allowable limits but that the discharge of PCBs coming from the former GM site is continuous.

PCBs are banned in Canada in 1985 and represent a risk to the health of humans and to other organisms in the environment. PCB is a chemical of concern to international organizations that monitor the health of the Great Lakes. 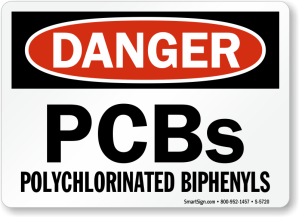 PCBs are very persistent both in the environment and in living tissue. The most obvious signs of environmental harm caused by PCBs are in aquatic ecosystems and in species that eat primarily aquatic organisms. Because of concern for the environmental and health effects of PCBs, the Canadian government made PCBs illegal in 1985.

People eating large amounts of certain sports fish, wild game and marine mammals are at increased risk for higher exposures and possible adverse health effects. People at greater risk include Aboriginal peoples, as well as anglers and hunters and their families.

None of this should have come as any surprise to the Ministry. The GM site was a Ministry-Registered PCB Storage Site defined in 1991[6] as a “Major Site” with large quantities of PCBs and PCB-containing equipment stored on the site until the late 1990s.

An environmental company, MTE is now combing the site attempting to find the size and location of the source of the PCB discharge. A workplan that must be completed before the discharge can be remedied. This process could take years to complete.

“The ministry’s hydrogeological review of existing reports concluded that groundwater would be migrating towards Twelve Mile Creek and is therefore not a concern for surrounding residential properties.”

However, MTE, the environmental contractor looking for the source of PCBs stated:

“The objective of Task 2 will be to evaluate the potential that groundwater at the Site is a source of PCBs to storm water. Based on the depth to groundwater and the depths of storm sewers at the Site, there is a potential for groundwater infiltration through poor connections or damaged pipes.”

The fact is, the Ministry has no idea of the size of the location of the source of PCBs discharging into the storm sewer.  Without this knowledge they cannot rule out possible leakage into the residential neighbourhoods adjoining the site.

For almost two years, A citizens group, The Coalition for a Better St. Catharines has been urging the Ministry and the City to get this site cleaned up and, in the interim, monitor the perimeter for any leakage of contaminants off the site

Yet when asked in early 2020 about possible leaks of contaminants from this industrial site, MECP stated that the site was secure and there was no evidence to the contrary.

In fact, when they made that statement MECP had not been near the site for two years when its spokesperson misled the Standard by claiming that “It inspects the site regularly. It checks to ensure any potential environmental issues are identified and addressed immediately to prevent any off-site impact.” [9]Clearly it is only the actions of citizen activists that brought this inaccurate statement to light and has resulted in the current revelations.

Given the situation at the former GM site, Citizens should have little confidence that Ontario’s environment ministry is protecting them and their families from health risks from exposure to industrial contaminants.

Meanwhile, the Mayor and Council are accepting the word of MECP who in turn is relying on the property owner to find the source of PCBs and stop the discharge. MECP is allowing the property owner, Bayshore Groups, to plan and manage the work needed to stop the PCB discharge.

This would seem to be a high-risk approach for the City given the real risks to the health of its citizens and the history of the property owner’s disregard of legitimate authority. Bayshore has not secured the site and continues up to the present time to ignore City by-laws and permitting requirements.

Despite this perilous situation the City has not expressed any inclination to step in to protect the health and safety of its citizens.

Citizens have diligently sought answers to questions from MECP. The Coalition for a Better St. Catharines has requested a public forum which was refused.  The Coalition’s FOI requests, the first of which was submitted in 2019, has yet to be fulfilled and despite paying the deposit, not one page has been released. MECP credibility as a watchdog protecting its citizens is in question. Will it stand up to bad actors or continue to delay action putting citizens health at risk?

About the Coalition for a Better St. Catharines – We are citizens activating for a better City for all. We are non-partisan representing a broad coalition of neighbourhoods. We advocate for a bottom-up citizen-led approach to governance, urban design and development. By allowing citizens to express their values and ideas the community can collectively contribute towards shaping our future and ultimately a better St. Catharines.

For more on the Coalition for a Better St. Catharines, click on – https://www.abetterstcatharines.ca/

Niagara At Large welcomes and is pleased to consider news and commentary from citizen groups across our Greater Niagara Region. You can submit news or commentary to NAL publisher Doug Draper at drapers@vaxxine.com .