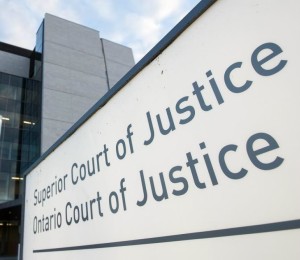 “The Attorney General agrees, of course, that the CMOH’s (Chief Medical Officer of Health) Directives are applicable to LTC (long-term care) homes across the province and must be adhered to. That said, the Attorney General views the Applicants as overreaching to the extent that the relief that they seek requires LTC (long-term care) facilities to provide them, on demand, with whatever PPE (personal protection equipment) they, in their sole discretion, deem necessary.”

— from the decision of the Superior Court of Justice for Ontario

“I want to thank Ontario nurses for taking on this fight for their own safety and the safety of patients. It’s shocking that in the midst of this crisis nurses have to go to court to protect patients and themselves.

Why should these people, who are now being recognized as front-line, essential service HEROES, have to fight Ontario’s Ford government and the private corporation sharks that own far too many long-term care facilities in Ontario, in the courts to get proper health and safety resources for these places where our seniors need their care?

The court ruling paints a picture of long-term care homes in which seniors are forced to share rooms with patients with COVID-positive residents, and front-line health workers have to fight daily to get the protective equipment they need to protect themselves and their patients.

It was shocking to see that, instead of backing the nurses, the Ford government took on intervenor status in this case to throw cold water on the nurses’ quest to have access to the PPE.

Nurses, patients and all health care workers should have access to PPE, including N95 masks, and the right to wear them. It’s dangerous that the government claimed the nurses were ‘overreaching’ in that goal.

The decision itself is absolute proof that the government should have Public Health take over the operation of some of the private long-term care homes in which residents aren’t properly protected.”

A Brief Footnote from Doug Draper, reporter and publisher at Niagara At Large – 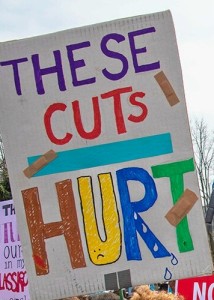 TORONTO, ONTARIO, CUBA – 2019/04/06: Four children with signs and yelling against Education Cuts.
Thousands of people including lot of children protests the Education cuts proposed by the Provincial Conservative Government led by Doug Ford.
The event is held in the Grounds of Queen’s Park which is the seat of the Provincial Government. (Photo by Roberto Machado Noa/LightRocket via Getty Images)

I know some people may roll their eyes at this, but I am going to say it again as a reporter who has been covering politics, one way or another, at daily newspapers like The S. Catharines Standard, and others, over the past 40 years.

Please stop voting in governments in Ontario or at the federal level in Canada who say they want to do more tax cuts. And why?

Because tax cuts necessarily lead to service cuts, and eventually, when you or your loved ones need the service that is cut, it is going to come back to bite you in the ass.

I am willing to bet that many of those who are in long-term care facilities in Ontario and other senior’s homes now voted for governments like that of Mike Harris’s in the 1990s, that promised them tax cuts.

Now they are dependent on long-term care and other seniors facilities where the resources suck because the budgets were cut to pay for all of the tax cuts.

So PLEASE, let’s smarten up with these governments, right up to and including Ford’s, that try to buy your votes with a promise of cutting taxes. PLEASE!