This Virus Doesn’t Care About Big Shots, Bullshit and Bluster 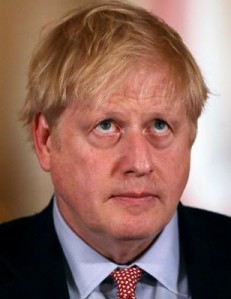 British Prime Minister, by many accounts, was way too slow in taking the virus series and launching a pandemic plan

You may very well have heard the Breaking News by now that earlier this April 6th, British Prime Minister Boris Johnson, one of the closest examples of a Donald Trump cut-out on the world stage, has been moved to intensive care after first being diagnosed with COVID-19 several days ago.

We all wish the British prime minister well, yet it should be instructive to all of us, especially his mop-hair, ideological twin in the White House, that this virus plays no favourites.

Johnson and Trump, often looking and acting like they came out of the same peanut shell. Both have played a game chicken with the coronavirus. For Johnson, he is now tragically fighting for his life. For Trump, it may cost him his presidency.

It doesn’t care how much you try to deny it, downplay the death and destruction it can do, shoot the bull about miracle cures or going on with business as usual, or blame all the usual bogey men and women when all hell finally breaks loose. This virus is going to have the last word.

As former U.S. vice president and Democratic presidential candidate Joe Biden said so aptly a month or two ago, and I paraphrase; ‘This virus doesn’t care about Donald Trump’s tweets.

Characters like Trump and Johnson couldn’t seem to grasp that, and Trump even still, until the virus was already infecting and killing their citizens in escalating numbers. 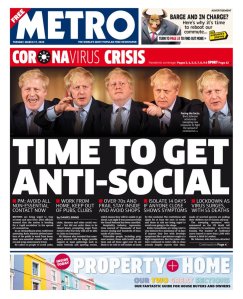 In mid-March, when the case count and death count were already rising, and just a week and a half before he tested positive for the virus, Johnson finally called for physical distancin a shut-down of non-essential services across the country.

Up to just a few weeks ago, Johnson was still shaking hands, talking about the country going on with business as usual, including pubs and sports events crowded with people, and now he is intensive care – an older, over-weight guy which places him at particular risk, fighting for his life.

When are characters like this ever going to learn, and when are so many of us going to stop putting people like this in government, when it was so clear from the start that they never had the personal attributes and never had a respect for the positive  role a government can play in our lives generally – never mind at a time like this when we need strong government leadership the most.

Arguably, we appear to be in much better hands here in Canada, although many would say that the jury is still out.

Here is British Prime Minister Boris Johnson, just a month ago, talking about himself going on shaking hands, even with people confirmed to have the virus. Click on the screen below to watch –

And speaking of the need for strong leadership during a time of crisis, ere is a recent video put together by a political group supporting Joe Biden’s candidacy for the U.S. presidency –

NIAGARA AT LARGE encourages you to join the conversation by sharing your views on this post, along with your name (not a pseudonym), in the space immediately below.