This Is What Weak, Wishy-Washy Leadership at the Top Leads To

We’ve Come a Long Way from “Sunny Ways”, Reconciliation and the Promise of a Real Climate Plan, Mr. Prime Minister. You’ve Blown It! 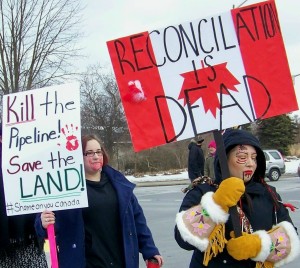 When you have political leaders like the one Canada currently has in the Prime Minister’s office who has no clear vision or plan, let alone the strength or  courage to  follow through on it, it is should not come as a surprising to anyone that you end up with people on all sides of an issue who end up feeling confused, frustrated, angry and betrayed, and who sometimes even resort to civil disobedience and violence.

Before I comment further, click on the screen below and watch the video, posted by APTN News (a national media outlet from and for Canada’s First Nation People) on the clash that took place between Ontario Provincial Police (OPP) and Indigenous people on the Tyendinaga Mohawk Territory in Ontario this Monday, February 24th.

And while you are watching, consider the possibility that it did not have to come to this if we had real political leadership in this country–

In my view, we cannot ultimately blame either side – the police or the Indigenous people – for what we just saw here. 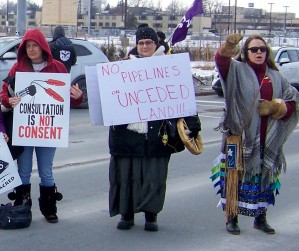 The rally in Niagara Falls, Ontario this February, supporting Indigenous rights from coast to coast. Photo by Doug Draper

I attended the protest rally, staged by members of the Indigenous community in the Niagara, Ontario, in Niagara Falls, Ontario this past Sunday, February 16th, where hundreds of Indigenous people formed a circle in the middle of the busy Stanley Avenue/Highway 420 Intersection before marching to the Niagara River and Rainbow Bridge – all in a show of solidarity for Wet’sewt’en First Nations people in British Columbia, exercising their land rights against a bid by a petro-chemical corporation to construct a gas pipeline through their territory.

The Niagara Falls protest was peaceful, with both sides, including police, showing respect for one another. In fact, before I left, I went up to a group of OPP officers, as I sometimes do, and praised them for the calm, professional way they were doing their job.

And this is something our federal and provincial government should know. In spite of the fact that the Niagara Falls rally blocked roads, the amount of support coming from people sitting in cars and trucks, expressed through waves, a show of thumbs up, and a honking of horns, was quite impressive. For the hour or so I was there, I never heard a single boo.

Indigenous protesters begin to gather in the intersection of Stanley Avenue and Highway 420 in Niagara Falls this past February 16th. Protesters and police treated each other with respect, and people waiting in their cars and trucks waved and honked their horns in support. Photo by Doug Draper

So getting back to the video showing the clash that unfolded this February 24th on the Tyendinaga Mohawk lands near Belleville, Ontario, the OPP officers appeared to be doing the only thing they could do at this point – follow the orders of their political masters – and the Indigenous people were doing what they felt they had to do to stand up for their land rights.

What was missing, not just on this February day, but long before this clash happened was leadership from Canada’s all-warm-and-fuzzy talk-and-very-little decisive-action prime minister, Justin Trudeau.

And I’m not talking about the kind of leadership that has been demanded by the right-wing extremists that have taken over the reins of federal and provincial Conservative Parties in this country – extremists like federal Tory Leader Andrew Scheer, Ontario Premier Doug Ford and Alberta’s tar sands Premier Jason Kenney, whose over-riding prescription for all of this is more pits and pipes and climate-ravaging tar sands pollution, and ordering  the police, and perhaps even the military, to go out and kick the butts of anyone who gets in the way of their vision of a nation stuck in the middle decades of the last century. 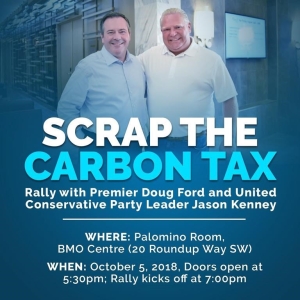 I’m talking about the kind of leadership Trudeau promised when he was first elected five years ago around “reconciliation” and finally doing right by Canada’s Indigenous people. Instead, we continue to have countless tens-of-thousands of Indigenous people continuing to live in Third Word conditions – many in communities where the tap water is too polluted to drink and the fish are loaded with mercury and other environmental poisons.

I’m talking about a Trudeau who promised he was going to be one of the world’s leaders on fighting climate change. Yet here he is investing billions of our tax dollars in pipelines and other infrastructure to fuel an industry that strips away Canada’s boreal forests to mine about the dirtiest crude you can find anywhere in the world for producing oil.

Trudeau and his Liberal government bought a Trans Mountain pipeline that no private corporation in the world seemed to want to invest in, and they did it without consulting  with the Canadian people, and with billions of dollars of our tax money.

And why? To please people in Alberta that were never going to vote for them anyway?

Recently it was reported that the cost for this pipeline has grown from some $5 billion-plus to possibly more than $10 million – making it the single largest subsidy for the gas and oil industry in Canadian history, at a time when other developed countries in Europe and elsewhere are moving away from subsidizing fossil fuel operations, and many global financial institutions no longer want to invest in them.

A look at the wildfires that ripped through the Fort McMurray, Alberta region in tar sands country in 2017. It appears Alberta Premier Jason Kenney and at least some of his constituents haven’t had enough of this yet.

While Trudeau is wasting our money and precious time trying to please that blowhard in Alberta, Jason Kenney, other countries are rapidly shifting away from carbon-polluting industries and to renewable sources of energy in the global effort to address a climate crisis that destroy our childrens’ future.

I sometimes wonder what Trudeau would do if Alberta had been a province that depended on manufacturing VHS tapes to survive. If Kenney demanded it, would he invest billions of dollars in VHS tape manufacturing plants too?

Why hasn’t he got the courage to tell Kenney back off, and use the billions of dollars instead to help the people of that province build new industries for the 21st century?

Why not use some of the money he’s wasting on tar sands pipes cleaning the mercury out of rivers and lakes, and building modern water treatment plants for Indigenous communities?

He has been so hyper-bent on doing things he hopes will please everybody – even people like Kenny, who will never support him anyway – that he has lost the faith of whatever base he had and has left almost everyone feeling frustrated, betrayed and angry about the leadership (or lack of it) our country, in these perilous times we are living in, are getting from him.

I’m betting already that in the next federal next election, if one of the other more progressive parties – the NDP or the Greens – have a good leader to run against Trudeau, he’s through.

For a recent news release from the Prime Minister’s office on this matter, click on – https://pm.gc.ca/en/news/readouts/2020/02/24/prime-minister-justin-trudeau-convenes-incident-response-group-discuss

For a full APTN story on the clash between police and members of the Mohawk community this February 24th, click on – https://aptnnews.ca/2020/02/24/police-clear-rail-protest-near-tyendinaga-mohawk-territory/

For more from coverage APTN news, click on – https://aptnnews.ca/

For More News And Commentary From Niagara At Large – An independent, alternative voice for our greater bi-national Niagara Region – become a regular visitor and subscriber to NAL at www.niagaraatlarge.com  .

2 responses to “This Is What Weak, Wishy-Washy Leadership at the Top Leads To”