An Update on Lake Levels from the Niagara Peninsula Conservation Authority

From space, Lake Erie in the lower half of this image, flowing into Niagara River and Lake Ontario.

This notice is intended to update the public and local municipalities of the status of Lake Erie and Lake Ontario conditions within the Niagara Peninsula and the eastern portions of the City of Hamilton and Haldimand County.

Currently Lake Erie water levels have started to slowly decline but remain at record levels for this time of year.  As of July 28th, Lake Erie’s static water level was 175.09m.  This water level is 79cm above average and 9cm above the record-high set during this week back in July of 1986.  This level does not account for any increase in water levels due to storm surge or wind driven waves.

Stakeholders with interests along Lake Erie should pay close attention to any weather systems that generate strong sustained West to Southwest winds as the resulting storm surge could result in shoreline erosion due to damaging waves and localized flooding.

Currently Lake Ontario’s water level has been declining on average 1cm a day. As of July 28th, the static water level was 75.73m which is 77cm above average for this time of year and 19cm below the peak level of 75.92m recorded on June 15th, 2019. These static water levels do not account for storm surge and wind driven waves. 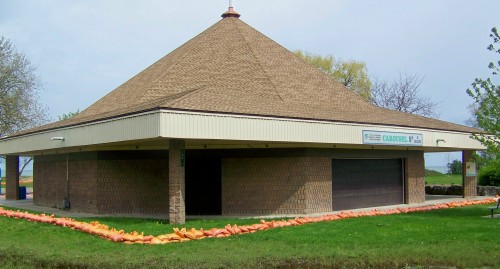 The 150-year-old carousel ride  in Port Dalhousie, St. Catharines, usually opened in May, was surrounded with protective sandbags this spring due to rising water levels in Lake Ontario, and will finally be opened this Saturday, August 3rd. File photo by Doug Draper

Stakeholders with interests along Lake Ontario shoreline should pay close attention to weather systems that bring sustained winds from the East and Northeast as the resulting storm surge could result in erosion due to damaging waves and localized flooding.

Water levels on both Lakes are to continue their slow decline, weather dependent, but will remain well above average for the near future.

The NPCA is continuing to monitor the situation closely and will provide updates as required.

This notice is in effect until noon Tuesday, August 6th, 2019 at which time it will be updated.