Saving Our Pollinators – City of St. Catharines Among First in Canada to Install Urban Beehives 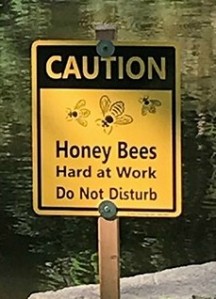 One of the signs up at Happy Rolph’s Animal Farm in St. Catharines as urban beehives are installed.

“It’s through initiatives such as urban beehives and pollinator gardens that St. Catharines has taken a lead in protecting our environment for generations to come.”

While St. Catharines’ Happy Rolph’s Animal Farm is already a hive of activity, the City is launching a new eco-initiative sure to create even more buzz at the beloved park.

The City has partnered with Small Scale Farms to install beehives at Happy Rolph’s in an effort to reverse declining honey bee populations. The City strategically located seven beehives on the west side of the pond, away from public areas so residents and bees can safely share the park. 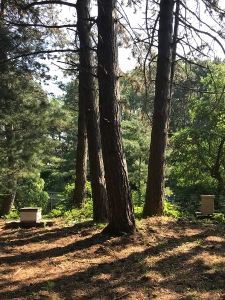 City among first in Canada to install urban beehives. Photo courtesy of City of St. Catharines

“The City of St. Catharines is among the first municipalities in Canada to install urban beehives on its properties and we are proud to be their partner for this initiative,” said Renee Delaney, founder of Small Scale Farms.

“It’s through initiatives such as urban beehives and pollinator gardens that St. Catharines has taken a lead in protecting our environment for generations to come. By placing bees at Happy Rolph’s, Small Scale Farms and the City of St. Catharines hope to encourage residents to learn more about these fascinating insects.”

The number of honey bees housed by each hive will vary based on time of year. Small Scale Farms will provide bee keepers and maintain the urban beehives on behalf of the City. Any honey that’s extracted will go towards Small Scale Farms’ food assistance program.

Residents who enjoy Happy Rolph’s are at no more risk of being stung than before beehives were installed. Ilyse Norton, development horticultural technician who is overseeing the initiative for the City, said honey bees are passive and gentle by nature and will sting only when frightened or aggravated or if the hive is threatened.

Residents who are fearful of bee stings or have allergies are encouraged to be extra cautious or avoid the area west of the pond. If anyone has questions or concerns they can discuss with park attendants.

“The diverse mix of flora and naturalized areas at Happy Rolph’s makes it an excellent location for us to launch our urban beehive initiative,” said Norton. “Honey bees colonies have been declining everywhere and the fruit and vegetable crops we rely on are in danger if this continues to happen. To reduce the risk for bee stings, we’ve made sure to place the urban beehives out of the way of the general public.” 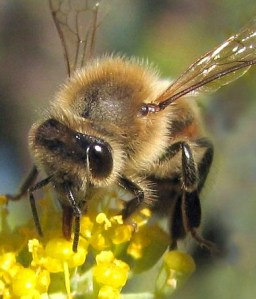 Butterflies, hummingbirds, moths and bats are among the many different kinds pollinators. Bees are the most common. However, bee populations have been declining for years because of pesticide use, habitat loss, climate change and other reasons.

The City has supported the important work pollinators perform by creating naturalized areas on City property and partnering with local organizations and community groups to plant pollinator gardens with native wild flowers, field grasses and other plants to give honey bees, butterflies and other pollinators a place to feed.

In 2017, the City of St. Catharines was among the firsts municipalities to be named a Bee City based on its work supporting and protecting pollinators.

For More News And Commentary From Niagara At Large – An Independent, Alternative Voice For Our Greater Bi-National Niagara Region – Become A Regular Visitor And Subscriber To NAL At Www.Niagaraatlarge.Com .

One response to “Saving Our Pollinators – City of St. Catharines Among First in Canada to Install Urban Beehives”