Maybe There Is No Justice in This World

“Dear Doug, Nothing is ever really lost, even if it disappears temporarily. One just has to keep bouncing back until sanity prevails.

“No one can work backwards into the future. You make a very special difference in the lives of those around you. Please don’t lose hear, Doug. Lynne.” 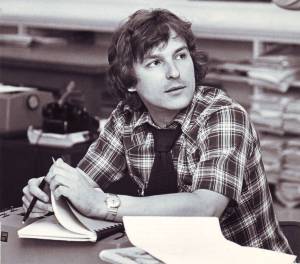 During Doug Draper’s years as an environment reporter at The St. Catharines Standard. When Conrad Black’s Hollinger corporation took ownership of The Standard and dozen of other daily newspapers across Canada, the environment beat disappeared at most, if not all of them, as newsrooms were hollowed out to fatten profit margins.

I received that nice note from a very nice lady named Lynne Matthews who was president of the Glenridge Landfill Citizens Committee, a community group in south St Catharines that played a strong role in shutting down the city’s dysfunctioning Glenridge Landfill site on the crest on the Niagara Escarpment and having it transformed into the naturalized park that it is today.

Lynne, who died in 2005 and had her name deservingly placed on what is now the Glenridge Quarry Naturalization Site for the role she played in this now popular recreational area’s creation, sent me the note after Conrad Black and his then giant Hollinger media corporation assumed ownership of The St. Catharines Standard, where I worked at the time, and dozens of other newspapers across Canada.

Black and the hand-picked hacks he put in place to run the newspapers proceeded to gut their newsrooms, including all or most of the environmental reporting beats at them – one of which was mine.

Suffice to say, I was feeling pretty blue about all of this at the time. The environmental beat at that newspaper had been my pride and joy for going on two decades, and from the readers’ view, I was always pleased to say, a well-received one too.

Lynne sent her note to life my spirits after the environment beat at the newspaper and I have always kept it tucked away in a safe place, close to where I where I work.

Conrad Black receives full pardon this May from U.S. President Donald Trump from decade old convictions that resulted in jail time in the U.S.

I took it out and read it again this May 16th after learning that the now 74-year-old Conrad Black, whose Hollinger corporation had roots in the U.S. and who spent more than three years in a U.S. prison after being found guilty in 2007 of siphoning millions of dollars from the sale of at least some of the corporation’s newspapers, was granted a full pardon by none other than Donald Trump, who Black has frequently written supportive columns about  and who he recently published a glowing book called ‘Donald J. Trump: A President Like No Other.’

“We’ve known each other a long time, but that wasn’t any part of the reason,” Trump is quoted to have told Black about the pardon. “Nor have any of the supportive things you’ve said and written about me.”

Anyone who has been paying any kind of attention to the madness and megalomania that, in no small part, defines the Trump presidendency knows how ready he is to (as he puts it in his own childish way) ‘do nice things for people who are nice to him’, even if the people he is being nice to make many others cringe.

So now Conrad Black, who was deported from the U.S. after his release from jail and who was permitted to return and live in Canada even though he denounced his Canadian citizenship in 2001 to accept some bloated “Lord of Crossharbour” title from Britain,  has his full pardon .

Conrad Black and, to the left, the cover of his flattering book on Trump, published in 2018. Trump reportedly says that Black’s good words about him had nothing to do with the pardon.

I am no longer interested in any re-litigating of the circumstances that land Black a jail sentence in the first place.

All I think about is the many newsrooms at dozens of good community newspapers that were hollowed out after Hollinger’s hatchet men and hatchet women got their hands on them.

And I think about all of the good, dedicated journalists across the country who were treated like gnats and freeloaders and who could never find a decent job in the field again because of media monopolies like Hollinger that put the relentless greed of shareholders above operating newspapers that had the recourses they need to serve their communities well and that could continue making a decent profit at the same time.

The gutting of so many newspapers may not be a crime in the legal sense, but it is certainly a tragedy for the communities they served.

And when I am reminded of all of this in the wake of the news of Black getting a pardon, I can’t help but wonder where the justice is in this world.

4 responses to “Maybe There Is No Justice in This World”