An Invitation to All from the City of St. Catharines

Niagara, Ontario  – The St. Catharines Museum and Welland Canals Centre will hold a pair of community events as it prepares to close its exhibit highlighting the war-time experiences of St. Catharines residents on the front lines and at home. 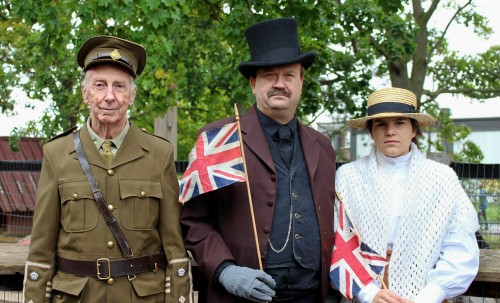 The St. Catharines Museum is closing the Doing Our Bit: World War One from St. Catharines to the Western Front exhibition with some special events, including a 1918-themed Victory Party on Nov. 30, and the original dramatic production, Stories from the Front, on Saturday, Nov. 10. Dressed in 1918 character are, from left, museum volunteers Des Corran,  Ian Ashman and museum public programmer Lauren Curtas.

Doing Our Bit: World War One from St. Catharines to the Western Front, closes Friday, Nov. 30.

The closing of the exhibition will be celebrated with a themed Victory Party on Nov. 30, and the museum is also presenting Stories from the Front, an original dramatic production featuring stories and music from the First World War, on Saturday, Nov. 10.

The exhibition opened in 2014 to commemorate the 100th anniversary of the First World War, examining the wartime experiences of St. Catharines residents at home and at the front. The exhibit takes viewers from the recruiting office right to the trenches.

Stories from the Front

Stories from the Front takes place Saturday, Nov. 10, at 1 p.m. Letters, diaries and photographs of St. Catharines men and women are integrated into the dramatic production, which honours the men who fought overseas during the First World War, and those they left behind at home.

The public performance, which follows a series of performances for local schools, will take place in the Burgoyne Room. Tickets are $5 and can be purchased by calling 905.984.8880 or book via www.stcatharines.ca/eplay .

“This original production is an interactive way of telling our community’s war story and is steeped in personal memories,” said Sara Nixon, public programmer. “It’s a great opportunity to learn more about our local military history and contributions on the front lines and at home.”

The 1918 Victory Party on Friday, Nov. 30 will be a themed event with era-inspired décor, live music, food and drink, costumed actors and attendees are encouraged to dress in 1918-inspired costume.

A live jazz band will play the music of the era, there will be free 1918-inspired dance lessons and demonstrations by Social Ease Dance Studio and there will be a costume contest, with prizes for the winners.

The museum will be selling a variety of era-inspired snacks and treats during the event, and there will also be craft beer from Lock Street Brewing company, wines from Megalomaniac and organic non-alcoholic sodas available for purchase.

“At the museum, we were inspired by the celebrations that took place in St. Catharines at the end of the First World War. This exhibit-closing party is our way of marking the anniversary of the end of the war,” said Kathleen Powell, supervisor, historical services.

“We’re proud to have offered a glimpse of our wartime history to visitors over the last four years, particularly the stories of real people from our community. It allowed us to show, in their own voices, how the people of our community were impacted.

“The first World War was an important milestone in our community and country’s history that came with a great deal of sacrifice and bravery on both the battlefield and the home front.”

Victory Party is a 19-plus event and will run from 8 p.m. to midnight. Tickets are $10 a person and can be purchased in advance by calling 905.984.8880 or book via www.stcatharines.ca/eplay.

If available, tickets can also be purchased at the door.