As the old saying goes, all good things eventually come to an end. 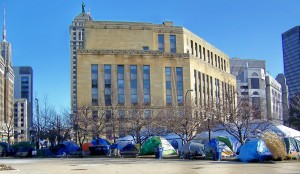 The Occupy Buffalo encampment as it looked this past Christmas, Photo by Doug Draper

Then again, what is “good” is often in the eyes of the beholder and as much as the protesters who kept vigil at the Occupy Buffalo encampment received the support of everyone from passing motorists to this New York border city’s mayor, some have no doubt been wanting police to move in and do what they finally did at 2 a.m. this Thursday, February 2 – dismantle all the remaining tents and banners at Buffalo’s Niagara Square and move the occupiers out.

The removal of the encampment began with police circling the square in the heart of Buffalo’s downtown with cruisers, SWAT teams and an armored vehicle, according to a front-page story in the February 3 edition of The Buffalo News. They moved into the square, dismantled the tents and put them in a trailer. Ten occupiers were arrested for standing their ground rather than following orders to leave the area.

The police operation marked the end of an encampment set up early last October in the square next to Buffalo’s city hall. It was one of many dozens of encampments  that popped up in the parks of cities and towns across the United States and Canada in the wake of the Occupy Wall Street protests that began last September and it was one of the last remaining encampments of its kind on the continent until the police moved in.

This past January 21, just two days before the police action, The Buffalo News ran an editorial calling for an end to the occupation. “It has been a remarkable event,” read the editorial, “but it’s time to restore Niagara Square.” Occupy Buffalo’s “occupants should proudly pack up their tents and clear out with the knowledge that while ‘Mission Accomplished’ may never be within reach – the nation’s problems are not that easily resolved – it’s time to deliver the message in a different way.

The editorial went on to praise the city’s mayor, Byron W. Brown, for setting “a sterling example for his colleagues across the nation in how he has handled the protesters. Instead of sending out police to pepper spray them, as has been the case in other cities, he has defended their right to camp at Niagara Square. Police still wave to the occupiers and firefighters honk their truck horns in support.” 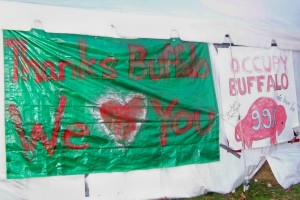 The love affair between the occupiers and city authorities, as expressed on these signs, ended this February 2. Photo by Doug Draper

Waving gave way to some pushing in the wee small hours of February 2 as some of the protesters refused to leave but there were no reports of tasers, batons, tear gas or pepper spray being used. Those who were arrested were charged with trespassing and disorderly conduct, and later told all the charges would be dismissed if they follow an order not to set up another camp within three miles of Niagara Square.

As for Mayor Brown, he was quoted saying that time was running out on an agreement the city had with the occupiers to dismantle the camp early this year. Festivals will be coming up in the city and square needs to be put back to normal for them, he said.

Some of the cold fronts that have moved through the region recently, with wind chills whipping through Buffalo’s downtown from Lake Erie, took a toll on the encampment anyway. The number of tents on the square had shrunk to about 20 from the close 50 that there were there last fall and, according to some recent news reporters, fewer than 20 occupiers were still braving the cold nights.

Occupiers told members of the media this February 2 they will meet soon to decide on other strategies for keeping alive the Buffalo wing of an Occupy Movement that began last year as a grassroots protest against the widening gap between the richest one per cent on the continent and middle and lower classes of people who are finding harder to pay the bills and keep their homes.

Their counterparts in other communities across Canada and the United States have also vowed to find new ways of keeping the pressure on for “economic justice.” Some have stressed that the powers-that-be can tear down the encampments but they cannot extinguish the determination of growing numbers of people to get back to a situation where people can live a decent life and earn a decent enough living to support a home and family.

(Niagara At Large invites you to share your views on this post in the comment boxes below. NAL only posts comments by people who are willing to share their names with their views. Anonymous comments or comments by individuals using pseudonyms are not posted on this site. Click on NAL’s ‘comment policy’ at the top of our home page at www.niagaraatlarge.com for further information.)

2 responses to “Police Sweep Occupy Buffalo Out Of City Square”