Massive Fire Guts One of Niagara’s Most Historic Buildings

The More Than 165-Year-Old Welland House Hotel – Located in Downtown St. Catharines – Was Destroyed in a Fire Believed to Have Started in the Early Hours of this July 12

A News Commentary by Doug Draper, Niagara At Large

How tragic and yes, at the same time, how curious. 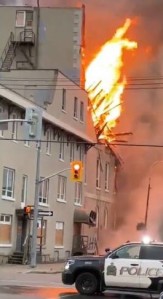 Niagara, Ontario – Representatives of St. Catharines heritage community have been working last year to get the old Welland House Hotel designated as an Ontario heritage site in hopes of preserving it, and as that effort continued on, the multi-storey building – once the tallest in the city – burns down.

At the end of a media briefing held this July 12th, as the remains of the building continued to smolder a few blocks away, St. Catharines Fire Chief Jeff McCormick told this Niagara At Large reporter that his department’s investigators, will be working with police and fire marshal investigators from the province to determine whether there has been any foul play.

While we are waiting for the results of that investigation, about the only other thing we can do, unfortunately, is to write an obituary for yet another treasured old building that somehow got away from us. 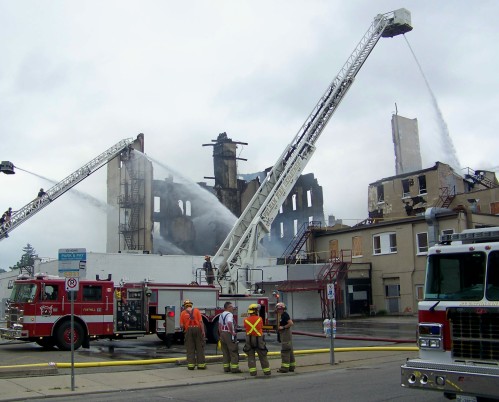 Within hours, the building was virtually destroyed as firefighters from St. Catharines, Thorold and Pelham continued to contain what was left of the fire. Photo by Doug Draper

St. Catharines/Niagara area residents may not realize it due to the unsightly sheets of plywood that covered windows of the once-grand Welland House Hotel during recent years of abandonment, but in its earlier days it was once ranked as one of the go to spas in North America for more affluent people on both sides of the Canada/U.S. border, including prime ministers and presidents, and even Jefferson Davis, the former president of the U.S. Civil War-era, Confederate States of America.

Indeed, at one time the Encyclopedia Britannica once listed the Welland House Hotel as one of the top spas in the world.

During the so-called Spanish Flu pandemic of a hundred years ago – one of the closet rivals to the COVID-19 plague we are suffering through today – the upper floor of the hotel was turned in to a make-shift hospital for patients of the deadly flu.

The building went on, well into the 20th century, operating as a hotel for guests. In the 1960s, its bar area also became a relatively safe haven for member of Niagara’s gay community. 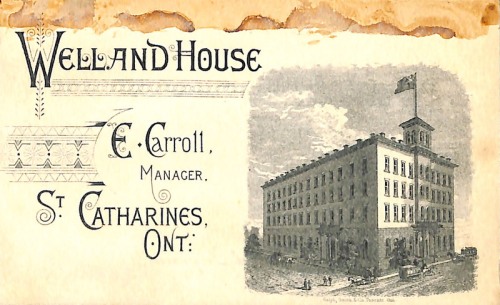 In more recent years, it served as students’ residence and home to Brock University’s radio station, until it fell out of use and those plywood sheets made their debut on the windows.

It was at that point, a year or two ago, that members of St. Catharines’ heritage advisory committee began pursuing a heritage designation for the building in an effort to preserve it – an effort that continued up to the fire that has destroyed it.

Let’s hope that fire investigators and police are able to get to the bottom of what happened here. 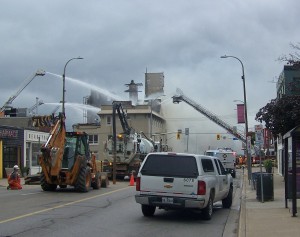 The battle to contain the fire went well into the afternoon. Photo by Doug Draper

This kind of scenario in Niagara, where old buildings are abandoned and citizens in the community group together to save them, only to wake up one morning and find out that the building has been gutted by fire, has happened far too often.

We have yet to find out exactly what happened here. Perhaps there was another unforeseen cause for this fire.

Whatever the cause, there is no escaping the tragic loss of buildings like this because in each and every case, the fire devours a monument to Niagara’s history that we will never get back.

It is another blow to what gives our communities character.

More on this later.

To watch St. Catharines Fire Chief Jeff McCormick discussing the fire at a news conference this July 7th, click on the video, courtesy of the City of St. Catharines, immediately below –

NAGARA AT LARGE Encourages You To Join The Conversation By Sharing Your Views On This Post In The Space Following The Bernie Sanders Quote Below.