A Statement from Greg Rickford, Ontario’s Minister of Indigenous Affairs,

“Today, we acknowledge the long-lasting, multi-generational impact of the residential school system on Indigenous communities, our province and our country. For more than 100 years, Indigenous children across Canada were removed from their families and forced to attend residential schools, where they were stripped of their language and culture.

Aboriginal girls in one of Canada’s many residential schools, here in the 1940s, where government authorities were allowed to literally abduct children from their families and imprison them in these institutions for the purpose of “taking the Indian out of the child.” The residential school system began under Canada’s first Prime Minister John A. Macdonald, and continued into well into the last half of the 20th century.

Orange Shirt Day was inspired by Phyllis (Jack) Webstad who, in 1973 at the age of six, attended her first day of school in Williams Lake, B.C., proudly wearing a brand-new orange shirt gifted to her by her grandmother.

Upon arriving to school, Phyllis’ new shirt was taken from her and she never saw it again. Phyllis has courageously spoken about the devastating impact this, and many other abuses she suffered, had on her dignity and self-worth, and how it made her feel as if she simply did not matter.

As we move forward together on the path of reconciliation, I urge everyone to honour survivors and their families, who have bravely shared their experiences, and to commit to learning more about the legacy of the residential school system in Canada.” 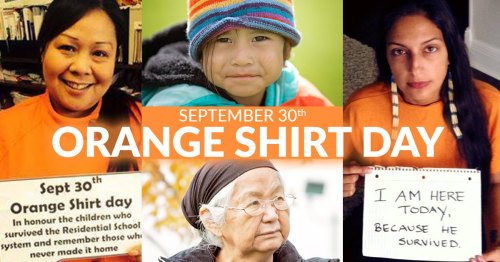