This Trump Rollback Affects Canadians Who Depend on Great Lakes Water for Our Survival Too! 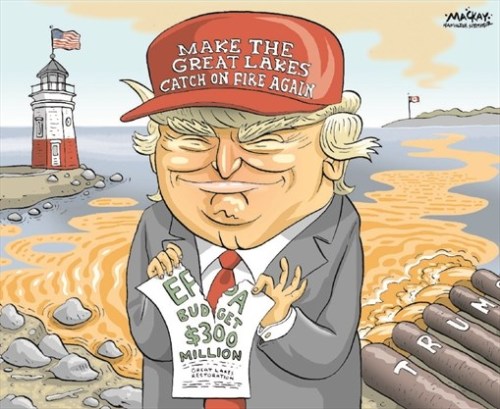 Our shared Great Lakes. They only remain healthy and safe, if all governments in Canada and the United States work together to protect them.

Buffalo, New York – Congressman Brian Higgins (Democrat) spoke on the House floor to strongly oppose the Environmental Protection Agency (EPA)’s recent rule rollback allowing the release of toxic metals into our nation’s Great Lakes and waterways, and urged colleagues to re-double their efforts to prioritize the long-term sustainability of the environment.

Higgins said “For decades, communities across Western New York have been working together to bring back waterways, like the Buffalo River, that were once declared ecologically dead due to unchecked industrial pollution.”

“Successful federal efforts like the Great Lakes Restoration Initiative solidify the federal role to improve water quality in the Great Lakes, restore aquatic habitats, and provide new recreational opportunities for all. This move threatens to yet again reverse years of hard-fought progress.”

In 2015, the EPA created a rule stating that beginning in 2018, power plants would have to show they were using the most up-to-date technology to remove heavy toxic metals such as mercury and arsenic from their wastewater by 2023 to protect the nation’s water.

However, in 2017 the Trump-led EPA postponed those requirements. Last month, the EPA finalized a rule pushing the new deadline for compliance to 2025, exempting several dozen plants from stricter water pollution limits entirely if they retire by 2028.

This most recent EPA rule change follows a disturbing pattern of the current Administration’s attempts to dismantle previously placed environmental protections. Since 2017, the Trump Administration has rolled back 68 environmental rules<https://www.nytimes.com/interactive/2020/climate/trump-environment-rollbacks.html> and is currently working on dismantling 32 more. Of the total 100 environmental rules, 11 were enacted to protect our nation’s water from pollution, with 4 of those already dismantled.

Reports have shown that mercury emitted into the air from coal-fired power plants is by far the leading man-made source of mercury in the Great Lakes and the rivers and streams of the region.

The Great Lakes region, being home to the most coal-fired plants<https://www.google.com/maps/d/viewer?mid=1FfxRam-gCWXYnXGYjrnTphy5NdA&hl=en&ll=42.854791118626565%2C-81.4119601778832&z=7> in the nation, makes this EPA rule rollback especially concerning for Western New Yorkers, as mercury in water has been shown to cause a number of health issues in humans, such as harm to the brain, heart, kidneys, lungs and immune system, as well as having serious negative effects on the local wildlife.

This rule would undo significant progress made by the Great Lakes Restoration Initiative (GLRI), an effort to clean up and revitalize the lakes after decades of damage from industrial pollution.

The Trump Administration’s proposed budget affirmed the importance of the GLRI by proposing $320 million for FY21, a policy that contradicts the rollbacks of EPA water rules. The House bill would increase GLRI funding to $335 million. GLRI supported the clean-up of the Buffalo River and other projects across Western New York.

Congressman Higgins has long been a strong advocate for clean water, protecting the environment, and the Great Lakes, by pushing for increased GLRI funding, fighting invasive species and harmful algae blooms, and holding polluters like Tonawanda Coke accountable.

Earlier this year, Higgins announced the House of Representatives approved the Water Resources Development Act<https://higgins.house.gov/media-center/press-releases/higgins-announces-approval-of-water-resources-development-act> (WRDA), a bill providing authority for the U.S. Army Corps of Engineers to carry out water projects, studies, and Civil Works missions in order to protect the nation’s fresh water and maintain its waterways.

Watch Buffalo, New York area Congressman Brian Higgins speaking out against this rollback on Great Lakes environmental protection measures on Youtube by clicking on the screen immediately below –

A Footnote from Niagara At Large reporter and publisher Doug Draper –

I cannot stress this enough.

Anything that the anti-environment protection Trump administration does to role back environmental rules and regulations for protecting our Great Lakes, has a direct impact on millions of Canadians who depend  on these freshwaters to live a good life too.

So don’t just sit there, Get involved in efforts to do something to stop governments on both sides of the border from rolling back more than 50 years of work to protect and preserve the life-sustaining resources on our planet.

By the way, where is Canada’s federal government when it comes to speaking out against all of the backward and reckless moves the U.S. Trump administration has made, and continues to make, that endanger our Great Lakes and every human and other living being that depends on them for survival?