Ontario’s Niagara Parks Commission – a body created in the late 1800s with a mission to protect and preserve natural features of the river corridor on the Ontario side – has thrown a wrench into efforts to recognize the Ontario side, internationally, as a wetland of global importance

Niagara, Ontario – Almost a year after municipal, state and federal leaders joined citizens on the New York State side of the Niagara River to celebrate the designation of that side of the waterway as a “wetland of international importance,” Niagara Parks Commission (NPC) board members have said NO to moving forward with such a designation on the Ontario side.

The NPC board’s decision came at a September 10th meeting – not open to the pubic and held by board members via teleconference  – and just one day after members of Niagara Region’s Planning and Economic Development Committee voted to approve such a designation for the Ontario side of the Niagara River under the framework of a Ramsar Convention, agreed to by 170 nations around the world, including Canada, at a summit held in Ramsar, Iran in 1971.

In a note obtained by Niagara At Large and circulated to Niagara, Ontario area municipal representatives and others in the days following the NPC board’s September 10th meeting, the Niagara Parks Commission’s CEO (chief executive officer) David Adames wrote the following – 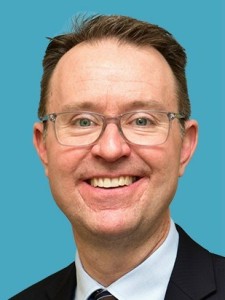 “At its board meeting on September 10, 2020 the Commission declined to move forward as the Lead Nominator in pursuing the Ramsar designation for the Niagara River. The Commission also asked that Niagara Parks step down from our participation on the Steering Committee,” said Adames in the note.

“This decision was made after legal review that was part of our consideration of potentially being the lead nominator as well as our need to prioritize our resources in light of the impact of COVID-19,” he said, adding that the decision “does not impact” any other environmental stewardship project the NPC currently has underway or may start in the future.

At the Niagara Region’s September 9th planning committee meeting, Niagara, Ontario resident and conservationist Jocelyn Baker stressed to committee members that a Ramsar designation is “benign” in the sense that it does not come with  rules or regulations attached to it.

Yet at the same time, it is a an opportunity to show “community pride” in and to celebrate a natural wonder we are fortunate enough to have in our backyard – just as communities in United States and in numerous other countries have already done with a total of 2,000 other such designations of wetlands of global significance around the world.

Jim Bradley, Niagara Regional Chair and a former Ontario Environment Minister, says a Ramsar wetland designation for the Ontario side of the Niagara River is a chance for Niagara to show the world it is “environmentally progressive.” File photo

At the same September 9th committee meeting, Niagara Regional Chair and St. Catharines Regional Councillor Jim Bradley, who served on former Ontario Liberal government cabinets as the province’s Minister of Environment, stated his approval for a Ramsar designation for the Canadian side of the Niagara River afford Niagara “an opportunity to be environmentally progressive rather than environmentally regressive.”

Bradley who, as Ontario Environment Minster in the mid to late 1980s, helped lead the charge for a binational clean-up of toxic pollution in the Niagara River, added that as much as Canadians like to think of themselves as being progressive and “more environmentally sensitive than our American friends,” this is a case where American governments and citizens have beaten Canada to the punch in recognizing the river as a globally important wetland.

Parties in the Buffalo and Niagara Falls, New York area joined New York State Parks Department, U.S. Fish and Wildlife Service and University of Buffalo representatives, at an official ceremony in October 2019 to designate their side of the Niagara River as a Ramsar site.

“This Ramsar designation formally solidifies, and highlights for the world, the Niagara River corridor’s standing as a site of international significance. I commend the local stewards who sought out and secured this designation,” said Brian Higgins, a U.S. Congressman for the Buffalo area at the ceremony in Niagara Falls, New York.

“The designation will help everyone see that the river is one of the most important natural places on Earth, putting our backyard on par with places like the Galapagos Islands and the Everglades,” added Jajean Rose Burney, deputy executive director of the Western New York Land Conservancy, and the U.S. co-chair of the binational Niagara River corridor Ramsar site steering committee, at the Niagara Falls, New York ceremony.

A map of more than 2,000 Ramsar wetland designations around the world.

Via the internet, Burney joined Jocelyn Baker at the September 9th Niagara Regional committee meeting to urge committee members to support a designation for the Ontario side of the Niagara River as a way to “say to us and the rest of the world that this place is special.”

It would also be a way to celebrate individuals on both sides of the border who worked for decades since the Love Canal toxic waste disaster of the 1970s who have worked so hard to restore the Niagara River to health, Burney said.

Baker and many others on the Niagara, Ontario side have been volunteering time since 2013 to get a Ramsar designation of the river here.

So far they have received support from Ontario Power Generation (OPG), the Town of Fort Erie, and earlier on from the City of Niagara Falls, although it is unclear what the Niagara Falls council’s position is now. More recently, the Niagara Peninsula Conservation Authority’s board of directors supported a designation for the Ontario side of the river, and a motion of support is coming to a full meeting of Niagara Region’s council this Thursday, September 17th.

Baker and others were hoping for support from the Niagara Parks Commission’s board, however, because Niagara Park, as the major custodian of public lands along the Ontario side of the river, is the body needed to officially nominate the river for designation to international Ramsar representatives.

With the September 11th decision by the board of the Niagara Parks Commission not to move forward with a nomination, it is unclear where the whole designation effort goes from here.

Interesting enough, the Niagara Parks Commission was created by the Province of Ontario in the late 1880s with a mandate to protect and preserve natural features along the Niagara River corridor.

Where does saying “No” to a designation that recognizes the global significance of the Niagara River as a world-class wetland area fit in to the Niagara Parks Commission’s reason for existence?

That, to me, is  completely unclear.

Posted immediately below are Statements in response to the Niagara Parks board’s rejection of a Ramsar designation, shared with Niagara At Large by two principle people, dedicating their time and energy to achieving adesignation –

“I was disappointed to hear the Niagara Parks Commission’s decision to withdraw from the process of lead nominator for the Canadian Ramsar designation for the Niagara River. There was a great opportunity for increased collaboration with the two major academic institutions in the region (Brock University and Niagara College) in terms of research, education, reconciliation and funding. The work of the Ramsar binational steering committee will continue to move forward and we will be in discussions to find a suitable lead interested in such collaboration.” – Liette Vasseur PhD –UNESCO Chair on Community Sustainability: From Local to Global, Brock University and member of the Ramsar binational steering committee. 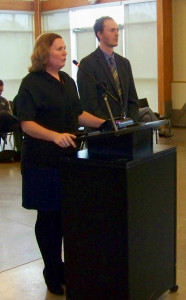 Jocelyn Baker, Canadian Co-chair of the Niagara River Ramsar Designation Steering Committee and her U.S. counterpart Jajean Rose-Burney, speaking last November 2019 at a Niagara Peninsula Conservation Authority board meeting. The NPCA followed through with support for the designation Photo by Doug Draper

“The work of the Ramsar binational steering committee is underpinned by decades of cross-border remediation efforts for water quality and habitat improvement. The collaborative work goes way beyond securing a Ramsar designation for the Niagara River. I am surprised by the decision of the Niagara Parks Commission to discontinue participation on the binational committee as the work has led to many successful partnerships for the NPC including increased access to research and innovation, which directly feeds into their stewardship portfolio. The math on this is just not adding up.” – Jocelyn Baker Co-Chair, Niagara River Ramsar Designation Steering Committee

Niagara At Large will be posting more news and commentary on this issue in the days and weeks ahead. Stay Tuned!