Let’s hope our Canadian government, for the sake of our citizens security, keeps border crossings like this Peace Bridge between Niagara, Ontario and the Buffalo, New York area closed.

As a life-long Niagara, Ontario resident who has always enjoyed crossing the Canada-U.S. border, and who has – quite naively, as it turns out – taken the freedom to cross for granted, how sad the past five months have been for so many of us who have enjoyed our cross-border visits to friends and relatives, and to all those places and events we loved to visit and engage in.

As residents in both countries now observe the fifth full month of border crossings to all but essential (mostly commercial) traffic due to COVID-19, the toll on those who have relatives and friends or own properties on either side, and on businesses and communities that benefit from cross-border traffic is incalculable.

How sad it is that events like this wonderful Elmwood Avenue Festival of the Arts in Buffalo, New York has been cancelled – thanks to Trumpland treating COVID-19 like a joke. File photo by Doug Draper

As I write this, I am reminded that this weekend of August 29th and 30th would mark the 21st anniversary of the Elmwood Avenue – an event that my family and always looked forward to. It has been one of the last great street festivals of the summer season, and certainly a wonderful boost to an Elmwood Village in Buffalo, New York that has been so much fun for people on both sides of the border, and such an economic boost for artists, and for the cafes and restaurants and other businesses in that so-very nice neighbourhood.

The COVID-19 threat on the American side of the border – even in the State of New York that has done an admirable job of pushing the curve down – remains so out-of-control and deadly, that events like this festival and so many others have been out-right cancelled this year, and who knows what is in store for them next year.

This Canadian has felt that I have been an unofficial ambassador for some of the nice events and businesses in the Buffalo, New York area for a long, long time. But I’m sad to say that, outside of some drastic change in the United States, I can’t do it any more. 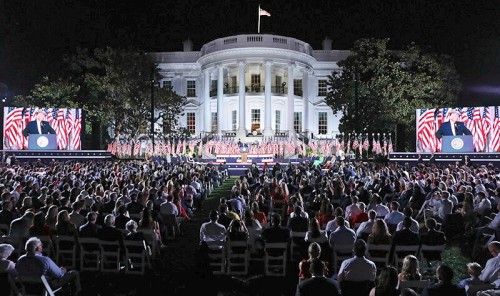 Thanks to the madness of Donald Trump, a Canada-U.S. border closing that so many of us assumed might only last for a month or two when it was originally announced last March by the governments of the United States and Canada, will now quite likely continue well into 2021.

And when I hear and read comments from my fellow Canadians, there is a real fear of more Americans, other than those driving commercial goods across the border, coming over here any time soon.

Just look at the last night, this August 27th, of the Trump reality show that disguised itself as the Republican National Convention.

Donald Trump might very well keep a grip on the U.S. presidency , even if he loses the election. And what is Trumpland going to do about it?

That last night of the convention was staged at the White House, which is supposed to be the “people’s house”, but that Trump and his enablers turned into a whore house for satisfying his primal needs.

There they were, many of the most powerful government and corporate people in the United States, right up to the president, crowded in – almost no one wearing a mask and no social distancing – at this shit show for Trump’s megalomania and totalitarian dreams.

What an example all of these powerful people, right up to the president, are setting for everyone else in their country when it comes to what people need to do to protect each other against this deadly virus, that has now claimed the lives of more than 180,000 people in the United States alone.

What a message this event was to people in Canada and the rest of the world – a message that far too many Americans thing this pandemic is a joke and don’t give a shit about taking any real protective action to protect against it.

Vigilantes like this kid on the right, who allegedly already shot people to death Black Lives Matter protesters in a Wisconsin town, and who has been honoured on America’s most highly watched cable news station, Fox News, will be out there making sure Trump remains in power at any cost to whatever democracy Americans mayor may not  believe in.

With that mad game on the American side of the border in play, this Canadian sincerely hopes that we continue to keep the border crossings closed for many months to come, if necessary.

And if the continued COVID-19 mess in Trumpland isn’t enough, we also have to worry about the growing violence in that country, and the blood-bath that might hit the streets, if and when Trump feels that the upcoming November election results have been rigged against him.

It may be that vigilante squads for Trump may take to the streets of America with assault weapons to fight for their ‘dear leader’ to remain in power.

With all of that, let’s hope that our Canadian government fights to keep the border crossings closed for as long as necessary.

We do not need this killer virus and the violence-yet to come in Trump’s America bleeding across our border to the Canada we treasure as a peaceful and civil place to live!