It’s Not Only a Natural Treasure. It is a Historical Treasure Too!

Waverly Woods – A Witness To History

A recent article in the Globe and Mail highlighted Fort Erie as the location for the first meeting of the Niagara Movement, which was the precursor to the NAACP (National Association for the Advancement of Colored People). 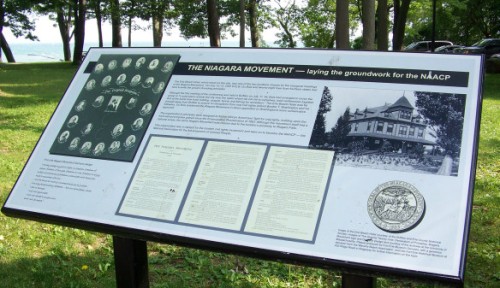 A plaque in Waverly Woods at the site of the long-lost Erie Beach Hotel where African American members of what became known as “the Niagara movement” held a meeting in 1905 that eventually led to the formation of one of America’s most important civil rights groups, the NAACP. File photo by Doug Draper

Readers may be interested in learning that this area, known as Waverly Woods/Erie Beach, is steeped in history going back thousands of years.

Archaeological information shows that this is the site of an important Indigenous settlement.  Climate, flint for weapons, abundant flora and fauna, and a safe river crossing allowed them to live here for many centuries.

The War of 1812, which had a major impact on the creation of Canada, was a big part of Fort Erie’s history.

The Siege of Fort Erie, with more battle deaths than Lundy’s Lane or the Battle of Chippewa, was the bloodiest confrontation on Canadian soil in history.

Historians acknowledge that it was arguably the most important military action involving Canada until World War I.  The Battle of Snake Hill, during the Siege, was one of the most significant battles.

Waverly Woods, part of the battlefield, has never been properly recognized or completely documented by archaeological exploration. Historians also suspect it may contain the burial sites of many of the soldiers who have never been found. 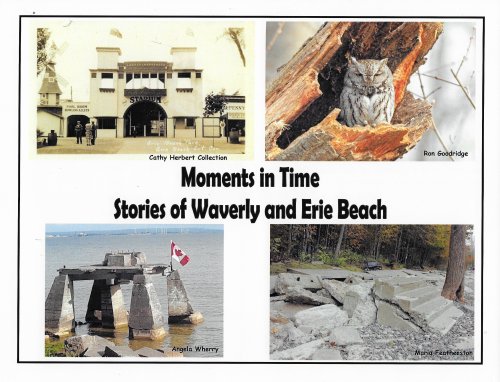 The cover of a book published in 2019, highlighting the natural riches and some of the history that unfolded over the past two centuries in the Waverly Woods/Erie Beach area of Fort Erie, Ontario. Let’s save these lands for present and future generations to visit and celebrate.

Some of their descendants still live in Fort Erie and local roads bear their names.

In 1987 during the construction of a home approximately 1500 feet from Waverly Woods, the bodies of 28 American soldiers were exhumed and repatriated to the US with all the respect they were due. Shouldn’t we show the same consideration for our own young men yet to be found?

Snake Hill Grove, which is part of Waverly Woods, was also known for Sunday celebrations by former slaves who had escaped into freedom on the Underground Railroad.  Many settled here in unused barracks until they could find permanent housing.

Later, the first meeting of the Niagara Movement (now the NAACP) was held at the Erie Beach Hotel which was located adjacent to the property.

In 1885, a picnic grove was established for visitors to escape Victorian-era urban conditions and later expanded into a full-fledged resort.

Known as Erie Beach Amusement Park (Buffalo’s Playground), it operated until 1930 with up to 20,000 visitors on a weekend.

Ferries and a railway, The Sandfly Express, brought people from the U.S. to the world’s largest outdoor pool, three story dancehall, 50 rides, and a zoo.  Some of the concrete foundations of the rides, walkways and swimming pool can still be found along the shore and in the Waverly Woods.

In more recent years, the woods have become a favourite place to enjoy nature in an urban setting.

It is also recognized by bird watchers as one of the best spring migratory bird locations in Ontario, with over 224 species, including the endangered Red-headed Woodpecker and other endangered species. 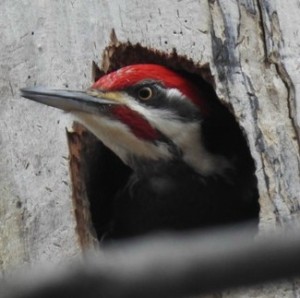 Save my home in Waverly Woods. Join Community Voices of Fort Erie and sign the group’s petition to keep the developers away.

The Monarch Butterfly, another species at risk, can also be found here before starting its long migration to Mexico.

Community Voices of Fort Erie Inc. has launched an appeal of the Town of Fort Erie’s decision to allow a development on the property that includes a 10 story condo, (110 units), plus 127 houses and townhomes.  The OMB/LPAT hearing was originally scheduled to begin on May 25, 2020, but has been postponed due to COVID-19.

You can also sign the group’s  petition to Save Waverly Woods. View the petition and sign it, if you wish, by clicking on – https://www.change.org/p/ten-story-condo-going-up-in-waverly-woods

Here is a related Commentary by Linda McKellar, a Fort Erie resident and member of Community Voices of Fort Erie – 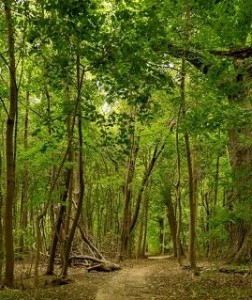 Inside Waverly Woods, near the shores of Lake Erie in Niagara, Ontario.

Of course I wholeheartedly agree (that) the (natural) environment (in Waverly Woods) and its inhabitants, including several rare and endangered species in the woods, the must be preserved.

Waverly Woods is vitally important to the citizens of Fort Erie, Waverly Woods who treasure it as a peaceful oasis in an area being blighted by new subdivisions.

But to put it bluntly, in my opinion, developers have repeatedly shown in Niagara…..THEY JUST DON’T CARE!

Governments at many levels seem quite disinterested preferring unfettered growth and money. Environmental laws keep getting gutted for profit. It is we, THE CITIZENS, who have to stand up against such people.

Many appeals to save places like Waverly Woods are often based on environmental degradation. Waverly, however, is not a one trick pony.

The environment is absolutely a HUGE factor but I feel I must add yet another – one that sets this appeal (to save it) apart.

This area was the site of the most battle deaths on Canadian soil in our history during the Siege of Fort Erie in 1814, more than Lundy’s Lane, Chippewa, Stony Creek and the many sites which are more familiar to most Canadians. It should be preserved as a National Historic Site. 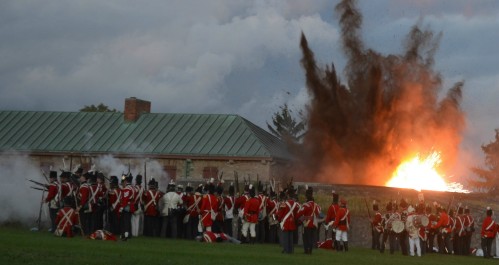 One of the many re-enactments underway of the Seige of Fort Erie in 1814, on the grounds of ‘Old Fort Erie’, a short walk away from Waverly Woods. File photo courtesy of the Niagara Parks Commission

In 1987, twenty eight bodies of American War of 1812 soldiers were exhumed when a resident was having a house built…. within sight of the woods. The area of the exhumation was actually an American field hospital BEHIND the American lines. 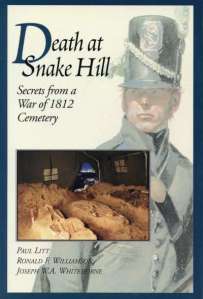 A book published by renown Canadian archeologist Ronald Williamson and others on the unearthing in the 1980s of War of 1812 casualties at a site called Snake Hill in the Waverly Woods area.

At the time, there was an attempt to cover up the discovery but the police were notified and everything hit the fan. The soldiers were repatriated to their homeland with all the respect they were due.

Many of the British (who had no means to evacuate their dead) and even a few of the American soldiers have never been found. Bodies of young men, American, Aboriginal and British forces, which may likely be on the site according to several historians, all deserve respect.

Remains were said to have been found in the area for decades, even when people were building cottages in the 20’s. Historical records confirm this was a battlefield. This is hallowed ground and should be respected as such.

Far lesser sites have received much greater recognition and even most residents are unaware that this is a land with great history, land that helped Canada remain Canada and not be swallowed up by the US. Ironic that war cemeteries for our dead overseas are so revered but not at home.

Unfortunately, there are parties who have different plans for this treasured place. As we come out the other side of this pandemic, with all the evidence out there that healthy green places help prevent plagues like this, we can’t afford more asphalting over of our more signficant green places. This development, and others like it in this Niagara region, has got to be STOPPED!

In addition, historically, this was a vital Aboriginal settlement and trading center. It was also a final destination and a settlement area for escaped slaves. The Erie Beach Amusement Park was in this forest from 1885 to 1930, one of the oldest parks in North America. Remnants of rides are still on the site and will be gone. The Niagara Movement which eventually became the NAACP, met at the Erie Beach Hotel in 1905. How many other little pieces of land in the area can claim this much history?

Please speak up and protect both our environment and our history. The voting public can only be strong if we act together.

Don’t complain after your towns are covered in asphalt.

Linda McKellar is a retired nurse and resident of Fort Erie, Ontario who has regularly shared her views on matters of interest to our region and beyond on Niagara At Large 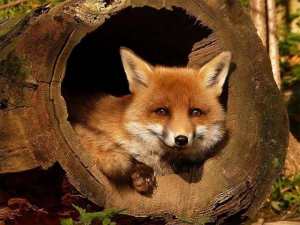 Waverly Woods is this furry critter’s home too. Photo courtesy of Community Voices of Fort Erie

To read a 2019 piece in Niagara At Large on the recently published book on Waverly Woods (and how you can get a copy), click on – https://niagaraatlarge.com/2019/12/11/new-book-highlights-the-best-of-fort-erie-ontarios-historic-waverly-and-erie-beach-area/

For another recent article in Niagara At Large, on the recent recognition Waverly Woods has received as a haven for a diversity of birds, as well as other wildlife, click on – https://niagaraatlarge.com/2020/07/12/waverly-woods-is-going-going-but-it-is-not-yet-gone/