Had Enough of All This Isolation? How About a Nice Sea Cruise?

Are you going nuts with all of this social distancing and staying safe at home business?. Wouldn’t a nice cruise jusst about hit the spot now?

We Better Get a Grip on Reality and Make a Resolution to Agree to the Same Set of Facts Folks. If We Can’t Do That, This Whole Thing We Call A Free and Open Democracy Is Through.

We are getting in to weeks here of all of this “social distancing” and isolating ourselves at home, and some people seem to be going a bit stir crazy. 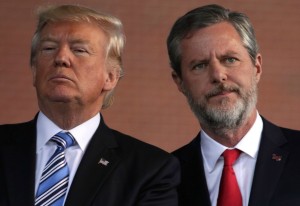 How about this for a match made in hell? Donald Trump and the Rev. Jerry Falwell, Jr., who has been all in on the self-described “stable genius’s” first take on COVID-19, that it was just like a “mild flu” that, like a “mircale,” will disappear in a matter of weeks.

They are busting to get out again and back to business as usual – if not so much in Canada, certainly down there south of the border in Trumpland where only a week ago the self-anointed “stable genius” himself declared swinging the doors of the country wide open again by Easter

Trump’s Easter resurrection was on until health experts on his own pandemic team made public their calculations that cases of COVID-19 across North America could spike by then and the number of deaths in the United States alone could, even if the whole country agrees to stay at home, surpass 100,000.

Yet that hasn’t stopped many of Trump’s most zealous sycophants and supporters from wanting to kick down their front doors and get going again. 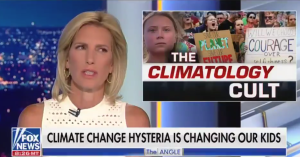 One of the most shameless Trump hacks on Fox News, Laura Ingraham. Here she is, months ago, slamming one of her favourite targets – 17-year-old Swedish climate activist Greta Thunberg. More recently, she is ranting about gun stores not being on “essential service” lists in some states during healthy and safety lock downs for this deadly COVID-19 catastrophe

Just this past March 31st, hours after Drs. Anthony Fauci and Barbara Brix warned at a White House press conference that even if Americans do “everything right” over the next number of weeks, somewhere between 100,000 and 240,000 people in that country could die, Laura Ingraham, one of Trump’s most shameless hacks on Fox News, slammed governors and mayors in certain states for including gun stores on their lists of non-essential businesses for a temporary shutdown, and had the nerve to tramp on American’s religious rights by urging a temporary suspension of church gatherings too.

One Christian evangelical Pastor in Tampa, Florida, a state where for many, Trump is the next best blessing to Christ himself, a Rev. Rodney Howard-Browne who is a friend of Trump and attended at least one of Trump’s White House prayer breakfasts over the past couple of years, made like the Bible-thumping shepherd he is and packed his church full of sheep this past Sunday, March 29th, despite repeated urgings of local government authorities to please not do it. 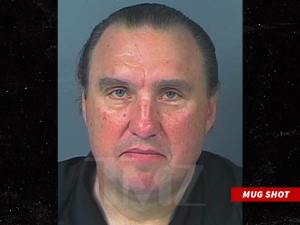 Here is a mug shot of Tampa, Florida Pastor Rodney Howard-Browne, who welcomed his flock to the church, echoing Trump’s earlier words that this whole killer virus thing is overblown. Area police accused him of reckless endangerment, but you also have to wonder about the nuts who packed the church.

The Pastor, who claims that the was arrested by Tampa police who accused him of reckless endangerment and slapped him with charges of violating government orders not to hold large gatherings at a time when the country and world is facing possibly the deadliest pandemic in more than a hundred years.

Not to be out-done by his evangelical colleague in the “Sunshine State,” the Rev. Jerry Falwell Jr., who prides himself as a close friend and supporter of Trump, decided that even though most other colleges and universities in the country have closed to everything but on-line classes, he would, much to the objections of many in the surrounding community open his privately-owned Christian campus called Liberty University in Lynchburg, Virginia this last week of March going into April, to the roughly 40,000 students who participate in whatever indoctrination goes on there at any one time.

Of course, many businesses have suffered from coronavirus shutdowns too, including the cruise industry with ships, which have the potential to double as floating petri dishes at the best of times, tied up at docks.

Ah, but I think I just heard some good news for all of the people out there who are going stir crazy at home and dying to take a dream vacation.

One of the cruise companies has just decided to go into operation and accept passengers on one condition – that they have already had the coronavirus and have gone through the 14 days of self-isolation. The company is apparently operating on one theory that if you have already had the virus, you are immune from getting it again. 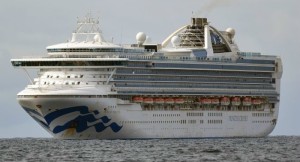 To hell with all this social distancing. Let’s bust out and go on a cruise.

And just to build up a bit of buzz for its re-launch, the cruise line is offering the first 500 people who call in with proof that they were confirmed COVID-19 cases a 50 per cent discount on their boarding passes.

Oops. I’m sorry. Just as this whole idea of getting out of the house and going on a cruise now starting sounding so exciting, I just found out it is an April Fool’s joke.

Just to be perfectly clear, the part about the cruise line in this commentary is somebody’s idea (okay, it was mine) of an April Fool’s joke at a time in our history when it is getting harder to tell the difference between a joke and some nut-bar thing that characters like Trump and others are actually saying or doing.

All of the other things I mentioned in this commentary – the business about Trump and his Easter opening fantasies, the Fox News hack bemoaning a temporary closing of gun stores, the pastor in Tampa, Florida, and Rev. Falwell moving to re-open his holy campus – are all frighteningly true.

I don’t know whether you can blame it on hackers and trollers on Facebook and Twitter, the failure of public education, a modern day lust for celebrities, false prophets and all of the populists or demagogues out there, or what – but things have gone so mad that not even the most brilliant minds in comedy and satire, like Bill Maher or the late George Carlin – could make it up any more.

We all ought to think about that and try to get a grip on reality, and at least try to agree to work with the same set of facts, or we won’t even be able to have a functional democracy any more.

This is no April Fool’s joke.

That is my sermon, but before this post ends, let me leave you with a recent rant from Bill Maher, a great American social and political satirist, on cruise ships.

If you can handle a few bad words, you can watch Bill Maher’s rant by clicking on the screen directly below –

For More News And Commentary From Niagara At Large – An Independent, Alternative Voice For Our Greater Bi-National Niagara Region – Become A Regular Visitor And Subscriber To NAL At Www.Niagaraatlarge.Com

One response to “Had Enough of All This Isolation? How About a Nice Sea Cruise?”