A Brief Foreword to this from Doug Draper, reporter/publisher Niagara At Large –

Some of Niagara’s public school teachers picketing next to the Pen Centre Shopping Mall in St. Catharines, Ontario this February 21st, all part of a cross-Ontario mass strike action by more than 2,000 teachers. Photo by Doug Draper

If and when you read the following news release from the office of Ontario Premier Doug Ford’s fully on side Education Minister Stephen Lecce, think of all of the elementary and secondary school teachers who are on the front line every day of the school year with students who are being bullied and with students who are bullies, and who are sometimes the targets of bullies themselves. 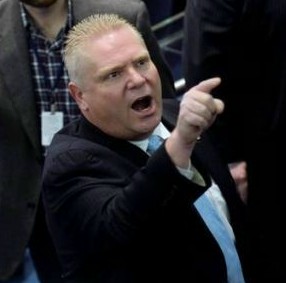 Doug Ford, who had a reputation for playing the bully when he was a Toronto city councillor and his late brother Rob was the city’s mayor, showing his stuff in 2013, when someone shouted criticism from the council’s public gallery

Those teachers have been out on picket lines, on rotating, one-day strikes, in recent months, fighting planned cuts to Ontario’s public education system by one of the biggest bullies of them all – Doug Ford.

If and when you read the following news release from Ford’s government, consider how much of what his government is recommending below will add to the amount of training and the amount of work these teachers will have to do – even as Ford is moving to significant reduce the number of teachers in the province, increase class sizes and cut hundreds of millions of dollars in funding for support staff, including guidance councelors, and other academic and classroom-related resources. 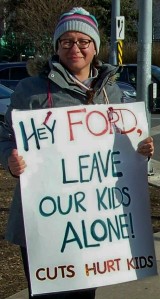 One pf Niagara’s many public school teachers participating in a one-day strike this past February 21st against the Ford government’s education cuts. Photo by Doug Draper

A year or so ago, on a weekly two-hour phone-in CBC Radio program called Cross Country Checkup, the topic was bullying violence in our public schools, and it was disturbing to hear teacher after teacher call the show and talk about first-hand experiences with children verbally threatening them with harm, and in a number of cases going so far as punching and even throwing desks in classrooms. Some of these teachers said they were injured so badly that had to take time off work to recover.

I remember students who were identified as bullies when I was going to school in the 1960s, but they were boy scouts and girl scouts compared to the ugly stories teachers were describing on this radio program.

So I find the following News Release from this Ford government pretty damn rich. Its contents would be laughable if what Ford and fellow right-wing extremists in his government are doing to deconstruct what was once one of the best school systems in the world when former Conservative Education Minister and Premier Bill Davis and government built it, wasn’t so bad for the future of our children and grandchildren.

I will have more on the strike actions of Ontario’s teachers and the threat the Ford government poses to public education in this province soon. 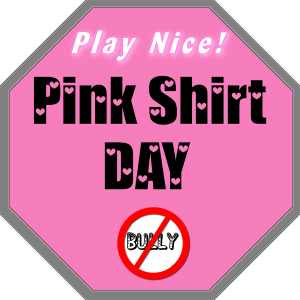 TORONTO — Today (the February 26th), on Pink Shirt Day, Education Minister Stephen Lecce announced the launch of an online survey to hear from students, parents and guardians and school staff about their experiences with bullying in Ontario schools.

According to the Centre for Addiction and Mental Health, 21% of Ontario students in Grades 7-12 have reported being bullied at school. This new survey seeks to gain a better understanding of the issue, ideas on how to better prevent and report bullying and new ways to make schools safer.

“Bullying is far too common in our playgrounds, schools and communities across Ontario,” said Minister Lecce. “That is why our government is taking decisive action to ensure every person regardless of their faith, heritage, orientation, race or income, is protected and respected. Every child deserves to learn in a safe and inclusive school, that is why we are empowering students to have a voice.”

“In order to prevent bullying in our schools, we need to be aware of what’s happening at the classroom level,” said MPP Christina Mitas. “The online survey will help us better understand the ways in which bullying manifests in classroom settings. This will assist us in framing the problem and designing more effective programs – ones that will keep our children safe.”

Students, parents and guardians and school staff are encouraged to participate in the survey, which is posted at https://www.ontario.ca/page/consultation-bullying-ontario-schools and  /Information for Parents/Guardians about Ontario’s Survey on Bullying/ is also available online  <http://www.edu.gov.on.ca/eng/safeschools/bullying-survey-parent-resource-en.pdf>.

* In November 2019, the government announced five new initiatives to combat bullying in schools, including the student survey, as well as:

* The government has updated the Health and Physical Education curriculum for Grades 1 to 8 to now include mandatory learning about online safety in all grades, including learning about cyber-bullying, cyber security and privacy.

Students also learn how to build and support healthy relationships, and develop skills to identify, prevent, and resolve issues that may lead to bullying. Implementation of the updated curriculum began in September 2019.

* The government has invested $3.18 million in the 2019-20 fiscal year towards various programs, partnerships and services that help to promote a positive school climate, support healthy relationships, build empathy and address bullying and cyberbullying.

* Complete the survey at https://www.ontario.ca/page/consultation-bullying-ontario-schools

* Information for Parents/Guardians about Ontario’s Survey on Bullying <http://www.edu.gov.on.ca/eng/safeschools/bullying-survey-parent-resource-en.pdf>

To read this News Release online, click on –   <http://news.ontario.ca/edu/en/2020/02/ontario-combatting-bullying-in-schools-through-student-survey.html?utm_source=ondemand&utm_medium=email&utm_campaign=m>

A Footnote from Doug Draper, Niagara At Large –

In my view, what is at stake here for our kids and this province cannot be under-estimated.

When I was still at The St. Catharines Standard in the mid to late 1990s, I covered the last major battle between the province’s teachers and the government of then-premier Mike Harris, who tore so much out of school budgets that parents and teachers were hosting bake sales and pizza days to buy books for school libraries.

Stay in touch with Niagara At Large for more on this.