Former Chair Al Caslin is “Proud” of his Regional Council’s Accomplishment? – “The Man Has No Shame!” 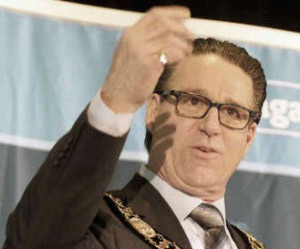 Then Niagara regional chair Al Caslin, delivering one of his “there’s-something-you-can-clap-about” annual “State of the Region” addresses.

“I always acted with the best of intentions for the betterment of Niagara.”

A Commentary by the Niagara-based citizens watchdog group, A Better Niagara, with a Brief Foreword from Niagara At Large reporter and publisher Doug Draper

A Foreword by Doug Draper –

Over the past four years, from December, 2013 through to the first few days of December this past year, the then Niagara regional chair – Al Caslin – hardly ever seemed to miss an opportunity to call a member of council or a member of the public, speaking to the council as a delegation, “out of order,” and sometimes even demand an apology from them if he felt something they said was offensive to him and what member of the public took to calling his so-called cabal.

This image began making the rounds on the internet as growing numbers of Niagara residents grew concerned about what was going down with Niagara regional chair Al Caslin and his council.

Sitting up on that high chair and wearing the Region’s chain of office like a king wears a crown, Caslin also banged a gavel a lot (the current Niagara Regional Chair, Jim Bradley, typically doesn’t wear that pre-Magna Carta, medieval necklace and I have yet to see him bang a gavel), and although I never saw  Caslin break a gavel, that probably says more about the strength of the gavel than anything else.

And now, after leading Niagara’s regional government through what arguably were four of the darkest and most uncivil years in its five-decade history, and after a report just released by the Ontario Ombudsman about an “inside job” under Caslin’s watch that should disturb any non-partisan, sober-minded Niagara citizen, Caslin has the audacity to send a statement to a radio station in St. Catharines saying this –

“As Regional Chair,” Caslin stated, “I always acted with the best of intentions for the betterment of Niagara.  I was proud to lead a Council that put in place robust internal controls and audit division to enhance accountability and begin to address ongoing practices like contract-splitting that violate the Region’s procurement policies.  I am glad that Niagara’s Municipal Ombudsman and now the Ontario Ombudsman have found that no corporate policies were broken through the recruitment process.  I thank the Ombudsman for his opinions on the situation and his recommendations to improve procedures at the Region.”

How many other ways can one ask what planet Caslin was on when he crafted this statement?

Read Ontario Ombudsman Paul Dube’s November 29th report, available by clicking a link at the bottom of this post, on what the Ombudsman called a process leading to hiring under Caslin’s watch of now-gone regional CAO Carmen D’Angelo, and I am sure many of you will be asking the same question about Caslin’s statement.

It certainly leaves this reporter, who found myself covering far too many of Caslin’s council meetings for the good of my health, wanting to call Caslin “out of order” and follow up with another one of the lines he reserved for those on council he seemed to like least – ‘That’s enough. Sit down.’

It also leaves me wanting to bang a gavel so hard I would break it.

In some areas of St. Catharines’ downtown, Al Caslin had fences and walls of buildings covered with these signs. He went down in flames in the October 2018 election anyway.

And if you question this reporter’s assessment of Caslin’s record as Niagara regional chair, let’s leave the last word to the only real voice that counts – that of the voters in the October 2018 municipal elections.

In a field of 23 candidates running for six seats on Niagara regional council in the City of St. Catharines, Al Caslin finished 20th in the field, garnering a mere 1.43 per cent of the total votes cast.

I rest my case for now.

Stay Tune in the hours and days ahead for more on the Ontario Ombudsman report and the “Inside Job” story.

Now here is a commentary on this  subject from A Better Niagara, a Niagara-wide group of citizen watchdogs –

Then Niagara regional chair Al Caslin, posing earlier in his term for a community-based anti-bullying campaign. As time went on, it seemed like a good deal of uncivil, bully-like behavior was going on during his council meetings.

The hubris of the man is unbelievable.

Let’s not forget where the buck is supposed to stop. It also beggars belief his communication director and his policy director acted alone, and without his knowledge, in providing  D’Angelo help and information to secure the Regional CAO position.

And, as the Ombudsman’s report makes clear, Caslin was solely responsible for changing and enriching D’Angelo’s CAO contract, without the knowledge of Council.

The man is just punking us when he says things like: “As Regional Chair, I always acted with the best of intentions for the betterment of Niagara. I was proud to lead a Council that put in place robust internal controls and audit division to enhance accountability . . .”

Let’s not forget that during his “reign”, and with the help of other Regional Councillors who were members of the “Caslin Cabal” (a couple of whom are still on Council), they inflicted a series of nearly mortal wounds on not just the Regional Government, but also on the Niagara Peninsula Conservation Authority, the NPCA’s Foundation, and on some municipal governments.

Under Caslin’s reign, $77 million in needed Regional investment in critical infrastructure was deferred so the Cabal could pretend to be budget heroes.

Under Caslin’s reign, the notes and computer of journalist Bill Sawchuk was illegally seized.

In December of 2017, during a closed session of Niagara regional council chaired by Al Caslin, St. Catharines Standard reporter Bill Sawchuk had his computer seized and was ordered out of the Region’s headquarters. The Ontario Ombudsman later ruled that the seizure of the reporter’s computer was a legally wrongfull act, although no follow-u charges were ever laid. File photo by Emily Spanton

Under Caslin’s reign, division was sown among municipalities. Cabal members were often aggressive and intimidating to other Councillors, and to members of the public who made delegations.

Under Caslin’s reign, good people who stood up to the Cabal, like former Pelham Mayor Dave Augustyn, were ruthlessly pilloried and their municipal administration interfered with.

Under Caslin’s leadership, the NPCA was taken over by the Chair’s fellow travellers who fired some of its best staff, turned the agency into a rubber stamp for the development industry, destroyed its restoration program and ended up costing it millions in legal fees and severances — money that should have gone to flood presentation, habitat restoration, land purchases and upkeep of Conservation areas. Ordinary citizens were so outraged by the obvious pillage of the Authority that they regularly rallied in public protest.

Even when the new Council removed the old members of the NPCA board they clung to power and it took three successful lawsuits by A Better Niagara to restore order at the NPCA board.

Then Pelham mayor and regional councillor Dave Augustyn became a favourite target of Caslin’s cabal. He hoped to run for the regional chair’s seat in the 2018 municipal elections and ended up losing in Pelham in a bid for a seat on regional council.

And lest we forget, it was under Caslin’s reign, with his henchmen on the NPCA’s board, when the Authority sued Ed Smith for daring to raise questions about its operation, putting his family through hell for more than a year before Superior Court Judge James Ramsay ruled definitively in Ed’s favour.

Like the behaviour that was condoned at the Regional Council table, the bullyboys on the NPCA board went after anyone who tried to stand up to them, attacking Regional Councillor Bill Hodgson, unjustifiably and ruthlessly, until he quit for the sake of his health.

The gang and their helpmates also destroyed the NPCA’s Foundation, spending more than they took in, using the money for parties and administration and, only giving $3,500 to charitable purposes in 2017 and only $1,500 in 2018 from revenues of $305,082 and $76,652 respectively.

What is there for Caslin to be proud of? 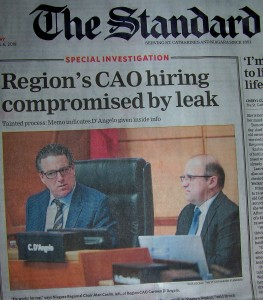 Headlines like this began coming relentlessly, one after the other.

By the time he was turfed from office, The St. Catharines Standard had published a series of damning articles about the misconduct that had occurred during his administration. A citizen’s group, A Better Niagara had formed to bring accountability, transparency and integrity back to local politics. Subsequently, voters threw out most of the Cabal in the 2018 election. The Auditor General was digging into the vast problems at the Conservation Authority and an Ombudman’s investigation was about to begin into the CAO hiring scandal.

How much money has all of this bad governance cost the Region in legal fees, investigations and severances? How many good Regional and municipal staff just quietly left because the “culture of fear” the Cabal created was more than they could bear? How many good people never applied for jobs in Niagara because our reputation around Ontario was so thoroughly trashed by the actions of these few? How much investment was lost? How much community goodwill? How much trust and faith in local elected officials?

How dare Caslin say; “I always acted with the best of intentions for the betterment of Niagara”.

Some of he many protesters who showed up at Niagara regional headquarters over the past few year, to protest the way things were unfolding under Al Caslin’s watch.

The man has no shame.

The Regional Council will be holding a special meeting on Thursday, December 5th to discuss the Ombudsman’s Report. We hope they seriously consider whether criminal charges should be pursued.

Caslin and his cabal have cost us all and they should be made to pay.

Read the full Ombudsman’s report here, by clicking on –  https://www.ombudsman.on.ca/…/Repo…/NiagaraCAO-EN-final.pdf…

About A Better Niagara – A Better Niagara is a coalition of concerned Niagara citizens committed to empowering democratic change to replace both regressive politicians and policies with progressive alternatives.

A Better Niagara is run by a steering committee and also features several subcommittees that are made up by a number of Niagara citizens. Our membership is inclusive and non-partisan.

Visit A Better Niagara’s Facebook page by clicking on on –   clihttps://www.facebook.com/betterniagara/