“There is no public interest justification for this ill-conceived proposal,” said CELA lawyer Richard Lindgren of Ontario’s Ford government to shut this environmental watchdog body down. “For over 25 years, the ECO (Environmental Commissioner of Ontario) has helped hold successive provincial governments accountable for their environmental decision-making, and the ECO has assisted countless Ontarians in exercising their legal rights under the Environmental Bill of Rights.”

An Urgent Message from the Canadian Environmental Law Association

Toronto – The Canadian Environmental Law Association (CELA) reacted strongly to the Ontario government’s introduction of Bill 57, which proposes to wholly eliminate the independent Office of the Environmental Commissioner of Ontario (ECO), and to transfer the ECO’s existing duties to the Environment Minister and the Auditor General.

“There is no public interest justification for this ill-conceived proposal,” said CELA lawyer Richard Lindgren. “For over 25 years, the ECO has helped hold successive provincial governments accountable for their environmental decision-making, and the ECO has assisted countless Ontarians in exercising their legal rights under the Environmental Bill of Rights (EBR).”

CELA joined 24 other organizations in sending an urgent letter to Premier Ford, informing the government to not proceed with this proposal.

Established under Part III of the EBR, the ECO is an independent officer of the Ontario Legislature. The ECO and her specialized staff conduct public education and outreach activities, and the ECO files annual and special reports with the Legislature to advise on whether – or to what extent – the government is complying with the EBR’s legal requirements.

In addition, the ECO reviews and reports upon energy conservation and greenhouse gas emissions. The Commissioner’s most recent report on climate change was filed in September, and correctly criticized the Ontario government’s repeal of the cap-and-trade program. 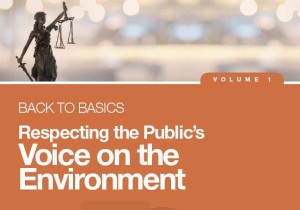 From the front cover of the Ontario Environment Commissioner’s latest and possibly last report, released earlier this November

These important public roles and specialized reporting duties of the ECO have not been exercised by the Auditor General. The value-for-money audits typically conducted by the Auditor General are focused on financial accountability, while the ECO, with its considerable in-house expertise, has addressed environmental accountability and provided objective, non-partisan advice for over two decades.

“We have been pleased to hear the Premier in recent months promise to crack down on polluters and to ensure clean air, water and land for all Ontarians,” noted Theresa McClenaghan, CELA Executive Director.”

“Continuing the stand-alone role and expert functions of the ECO is an essential tool in achieving that objective, as seen in the Back to Basics report (https://eco.on.ca/reports/2018-back-to-basics/) that she released earlier this week. Eliminating the ECO is contrary to this government’s clear commitment to safeguard environmental quality.”

For these reasons, CELA calls upon the provincial government to withdraw Schedule 15 of Bill 57, which amends the EBR and terminates the ECO.

The Canadian Environmental Law Association (CELA) is a non-profit, public interest organization established in 1970 to use existing laws to protect the environment and to advocate environmental law reforms. Funded by Legal Aid Ontario, CELA is one of 76 community legal clinics located across Ontario, 18 of which offer services in specialized areas of the law (for contact information, see Getting Legal Help: A Directory Community Legal Clinics in Ontario).

For more on CELA and its public interest work for our environment, click on – http://www.cela.ca/ .

Ontario Premier Doug Ford and his so-called “Government for the People” have announced plans to make this independent watchdog boy for our environment go away. Contact your MPP and urge them to work to stop Ford’s war on our environment and our children’s future, NOW!

To add your voice and support a campaign launched by Ontario Nature, a province-wide, non-partisan citizens organization, to save the office of the Environmental Commissioner of Ontario, click on –https://ontarionature.good.do/peopleandenvironment/support/thanks/drapers%40vaxxine.com/.

Learn more about the Environmental Commissioner of Ontario by clicking on its website at – https://eco.on.ca/

To read news Niagara At Large posted, just this November 15, on the Ontario Environmental Commissioner’s latest and possibly last report on what needs to be done to protect our environment in the province, click on – https://niagaraatlarge.com/2018/11/16/raw-sewage-toxic-runoff-plague-ontarios-lakes-and-rivers/ .