Niagara, Ontario, November 2015 – A group of supporters of the Haudenosaunee Right to Hunt will be gathering to counter anti-hunt protesters at Short Hills Provincial Park in Thorold, Ontario with a Peace Food Table as an experiment in transforming relationships between Indigenous and Canadian peoples. 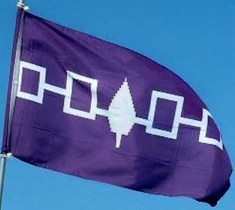 The Haudenosaunee flag – Indigenous hunters call for peace and respect

In past years, Haudenosaunee hunters have been subjected to anti-hunt protesters surrounding hunter’s vehicles with flashlights aimed in hunter’s faces and have been subject to being called various derogatory statements.

Supporters of the Haudenosaunee Right to Hunt will gather during the traditional hunt to support during hours in which they will arrive and leave Short Hills.

During each gathering, the Peace Food Table will offer vegan and non-vegan food options and is available for everyone in attendance, including hunters, supporters, anti-hunt protesters, police and the Ministry of Natural Resources and Forestry.

Reconciliation is of paramount importance to the Canadian government. As such, the supporters of the Haudenosaunee Right to Hunt work to remind Canadians that the Canadian existence is built upon treaty relationships with Indigenous peoples. Brian Skye, member of the Haudenosaunee Wildlife and Habitat Authority says, “that [treaty] relationship is based on mutual respect, trust and friendship. 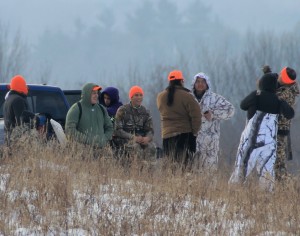 A gathering from a past year of Native hunders at Short Hills Provincial Park in Niagara, Ontario. File photo.

Our respect for safety has ensured we conduct ourselves accordingly. Our trust is that we are allowed to continue to practice our traditional methods of harvesting within the context of  ur mutual understanding of conservation. We continue to hope to build on the relationship so that we may understand that the accommodation that all parties have undertaken will result in a natural balance.

The ecosystem needs to rebound so that indigenous plants and medicines can survive without invasive species being allowed to thrive. Our harvesters are conducting themselves with integrity and our due respect that people have the right to protest, as we do. – In friendship, Degonuhdogeh Brian Skye. ”

Understanding that the Nanfan Treaty of 1701 guarantees the right to hunt for Haudenosaunee peoples is critical to healing the relationships between Haudenosaunee and anti-deer hunt protesters in Southern Ontario.

The Nanfan Treaty was affirmed in R. vs. Ireland (1990) when it was ruled that treaty is a living document. In respecting Indigenous peoples, the treaties and court decisions, the supporters of the Haudenosaunee Right to Hunt are partnering with the Christian Peacemaker Team (an international Human Rights Organization) to counter the archaic belief that treaty is a thing of the past.

Representatives of CPT’s Indigenous Solidarity Team share that, “We are here at the invitation of Haudenosaunee hunters, to show support and provide accompaniment as they seek to exercise their treaty-guaranteed right to hunt deer on their lands. Additionally we are here to challenge the narrative of colonization, as we have seen it manifest in both the media about this hunt and the attitudes of those protesting the hunt.”

Not only are treaty rights at the core of this issue, so too is the reality of overpopulation of deer in the area. The Ministry of Natural Resources and Forestry have identified overpopulation as one of the main reasons for devastated landscapes where flora and fauna are consumed to the point of erasure in the area.

Not only that, but diseases in the herd can abound when deer are in such close proximity to one another and this has potential for harmful contact with nearby human communities. Although, anti-hunt protesters identify safety and protection of the park as key reasons for their protest, the supporters of the Haudenosaunee Right to Hunt uphold the integrity of the hunters in their exercise of safety precautions and good stewardship of the land and animals.

For more information on this issue and on Christian Peacemaker Teams in Canada visit – http://www.cpt.org/category/cptnet-categories/canada and sixnationsrighttohunt.tumblr.com

Visit Niagara At Large at www.niagaraatlarge.com for more news and commentary for and from the greater bi-national Niagara region.