In the 2015 Greenbelt Review one of the most important objectives should be to expand the Greenbelt on lands within the watershed based borders of the Niagara Peninsula Conservation Authority (NPCA.) 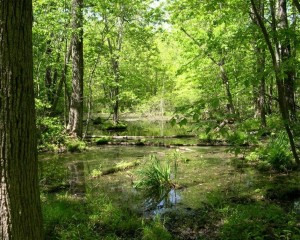 Some of the last of Niagara’s natural spaces left in the provincially protected Greenbelt.

These lands are the agricultural and environmental protection -zoned lands within the southern part of the City of Hamilton, the western edge of the County of Haldimand and the entire Niagara Region. This area is the southern edge of Ontario’s Greenbelt.

The lands of the southern Greenbelt are of considerable agricultural environmental and cological significance. They contain virtually all of Ontario’s grape and tender fruit lands, asource of healthy nutrition. Through the middle of this Greenbelt, even in urbanized areas such as the cities of St. Catharines, Niagara Falls and Hamilton, there is a still forested Niagara Escarpment.

Linked by the Bruce Trail the Niagara Escarpment forest, some of which contains old growth relics of giant oaks and maples, is an important tourist attraction. This is vital to the continual growth of tourism – related businesses, such as wineries, restaurants, resorts and hotels-one of the few growing aspects of the region’s economy.

While precious as it is, and facing battles for reductions already announced by the Town of Grimsby and the “swaps” proposed by the candidates for the chairmanship of the Niagara Regional Council, the southern edge of the Greenbelt needs a radical expansion. This is needed to protect both Ontario’s richest farmlands and ecologically diverse Carolinian wetlands and forests.

In Niagara Falls the Greenbelt boundaries are limited to that of the Niagara Escarpment Commission (NEC) at Mountain Road. This is a result of a cutback of the original area in 1977 following a self-interested land owners’ revolt. Originally, the NEC boundaries extended all the way to the Welland River. 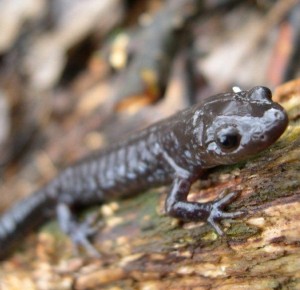 One of the many little critters that make up part of the link of life that matters to all of us.

These boundaries captured all the lands suitable for high quality grape and tree fruits as shown by the testimony of fruitland expert, Ralph Krueger, to the Ontario Municipal Board, (OMB) in 1979. He explained how wind currents south of the Niagara Escarpment moderated climate conditions to make it possible to grow such climate sensitive crops such as peaches and apricots north of the Welland River.

Lacking the protection of the Greenbelt , some lands that were part of the area defined by Niagara Escarpment planner Leonard Gertler as the “shadow fruit belt” are currently the subject of two urban boundary expansion requests by the City of Niagara Falls. As a result some of Ontario’s best farmland is threatened for uses such as a proposed “adult lifestyle” community and “golf-villas.”

While the farmlands of Niagara Falls and Thorold, north of the Welland River , are unique in terms of their agricultural capability, all the lands of the edge of the southern Greenbelt are of enormous ecological sensitivity. This is because they are warmest part of the Carolinian forest zone, Canada’s most species diverse ecological region.

The edge of the southern Greenbelt is a deep south Carolinian zone. Here the dominant natural ecosystem apart from the highland rocky outcrops of the Niagara and Onondaga Escarpments are Pin Oak and Tupelo dominated forested swamp wetlands. Unless threatened by urban sprawl, such as the proposed Thundering Water’s development which at one time was proposed to encroach upon what is now a provincially significant wetland, these diverse ecosystems are expanding – especially south of the Welland River . These unusual woodlands shaped by vernal pools and lined with rare Buttonbush communities are an important habitat source for breeding amphibians such as the Wood Frog and the Blue Salamander.

In preparation for a recent OMB hearing I accompanied the ecologist Dr. Michael Dickman, who was recently awarded the Niagara Region’s Lifetime Environmental Achievement Award, on an ecological field survey. Going out in the Spring period of maximum stream flow we wanted to see if there were any streams within Niagara Falls urban boundary, which might support life forms such as fish and amphibians. We used the most recent available mapping which indicated with blue lines streams which flowed from or into the Niagara Escarpment.

Despite our most determined efforts Dickman and I could not see any puddles, let alone streams, on what the maps showed as blue lines within the north east urban area of Niagara Falls. The former streams were all entombed in cement, some of the last of the assaults upon such ecosystems during the environmentally regressive times of the Mike Harris “Common Sense” revolution. While outside the urban boundaries we heard an explosion of songs of the Chorus Frog, inside the sterile wastelands were an ominous sounds of silence, broken by the noise of automobiles.

Sprawl also threatens to degrade the upper reaches of the Welland River and the Twenty Mile Creek, flowing through the threatened southern pathways to the Greenbelt.  Urban expansions onto agriculturally zoned lands are proposed in both Hamilton and West Lincoln, which could be prevented through expansions of the Greenbelt. A watershed survey of this area by the NPCA here warns of “tumours on fish, smaller fish and much fewer fish” in these at risk headwaters. Sprawl here threatens three Turtle species at risk – the Snapping, Blanding’s and Northern Map turtles. These waters are one of the last areas in Canada providing habitat for the threatened fish, the Grass Pickerel.

What is most appalling about the threats to the fringe of the southern Greenbelt, is that there is no need, as specified by Ontario’s planning legislation, for the proposed urbanizations. A recent effort in Niagara Falls at such an expansion was entirely based on attempts to “grand-father” from the province’s Growth Plan intention to curb sprawl outside the Greenbelt. The Niagara Region’s own planning studies found that Niagara has a 41 year housing supply. As a result of such a stupendous over – supply, it is undergoing a phasing amendment to its official plan, intended to delay growth within its urban boundaries to a 20 year supply. For its part, Hamilton is attempting to justify urban expansion in the headwaters of the Welland River and Twenty Mile based on lack of employment lands and by ignoring 400 hectares within its urban boundaries according to a 2012 Tax Assessment Review conducted by the Hamilton Civic League.

During the 2015 Greenbelt Review, one of the most critical objectives of environmental groups across the province should be to protect Canada’s deep south. Other farmlands on the Greenbelt are of far less consequence than these in terms of the variety of crops that can be grown upon them. And, the deep south’s forests are treasured relics of former vast forested wetlands, which can be restored with care if urban sprawl is shut down.

John Bacher is a veteran conservationist in Niagara, Ontario and  long-time member of the citizen group, Preservation of Agricultural Lands Society. A past contributor of posts to Niagara At Large, his most recent book is called ‘Two Billion Trees and Counting – The Legacy of Edmund Zavitz’,