I found myself barely able to stop a blood vessel from bursting this morning when I picked up a copy of The St. Catharines Standard to a front-page story with a headline that read; “Eke suggests locking away homeless people.”

Who is David Eke?

His full name is David Eke and he was a former Niagara-on-the-Lake town councillor and eventually a Lord Mayor who also sat on Niagara’s Regional Council going back about a decade ago.

He was a rather affable fellow when you met in one on one, but never the brightest light on the tree, and he had a cringe worthy reputation at regional council meetings of getting up and pontificating for very many long minutes on end. And at the end of all that pontificating, many were left saying ‘we will never get that time back.’

Yet now, here is David Eke, serving as Co-Chair of the Niagara Regional Police Services Board, thanks to his appointment to the board by the Ontario Doug Ford government in 2019, then reappointed by Ford again this November 2022, suggesting at a police board meeting this week that police should sweep up any homeless people considered to be mentally ill and have them ‘forcibly institutionalized’.

To his credit, Niagara’s Chief of Police, Brian MacCullough, responded that homelessness “is not a crime.” 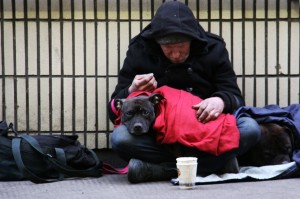 As a result of many factors, homelessness is growing in Niagara and across the country. We need to work on some real answers that shows some compassion for those who are living out onthe streets.

Homelessness is also a situation in Niagara and other regions of Ontario that is growing due to the soaring costs of rental units and homes, and it is an issue that desperately needs to be addressed with intelligence and compassion.

It needs to be addressed outside the ignorance of Eke who, believe it or not, went on to reportedly say; “Back in the 1920s, mental health became very prominent and we developed a lot of institutions to serve people.”

Well back in the 1920s they did a lot of other things, like chain people considered mentally ill down in basements or strap them to gurneys and give them electric shock treatments.

Eke’s input at this Niagara Regional Police Services Board meeting were totally repulsive and unbecoming of anyone sitting in a position of  responsibility.

David Eke  should be fired off this board immediately,, but he probably won’t be.

After all, he was appointed by the Ford government.