“While the 2016 CAO hiring process, and the resulting fallout, will long be remembered as stain on the Region’s reputation, this term of council made it a top priority to take immediate action on this matter. As a team, we implemented all of the Ombudsman’s recommendations, ensuring we took every step necessary to prevent this type of controversy from occurring again.”                                                   – Jim Bradley, Niagara Regional Chair

(A Brief Foreword from Doug Draper at Niagara At Large –

The brutish, totalitiarian-drenched rule of former Niagara regional chair Al Caslin and his shameless cabal of sycophants, making up the wretched majority on his council – haunting the lives of Niagara residents and belittled and even harassed those residents who dared to question Caslin’s cabal between 2014 and 2018 – was, without question, the darkest time in this regional government’s 52 year history.

Like two pees in a pod, a file photo of former Niagara regional chair Al Caslin, left, and his favouried CAO Carmen D’Angelo

One hopes that we will never see anything like this rancid period that, as was said this week by the current Regional Chair Jim Bradley, who has done so much through is honourable presence, to turn this around, we will never have to live thourgh this “stain on the Region’s reputation” again.

The 2016 hiring, overseen by Caslin and company, of Carmen D’Angelo, who was considered by many area residents to be putrid as a CAO of the once-proud Niagara Escarpment Conservation Authority, as CAO at Niagara Region constituted possibly the lowest point ever in our regional government’s history.

To see this character sitting in the same seat as such a decent predecessor has the retired Regional CAO Mike Trojan, was, in this reporter’s view, beyond disgusting, and we  have Caslin and his minions, including the likes of Gale and Rigby, still sitting on the regional council, to thank for that.

Who we really have to thank is the current Regional Chair, Jim Bradley, and a majority on his council for working so hard to turn things around and win back some respect for Niagara’s regional government.

The damage Caslin and his yes people did to our Region can never be calculated in dollars and cents and they need to pay, in whatever way possible.

In a letter addressed to Regional Chair Jim Bradley, Ontario Ombudsman J. Paul Dubé confirmed that his office will be closing their file on the tainted 2016 Chief Administrative Officer (CAO) hiring process, expressing thanks for the cooperation he experienced from the Region. 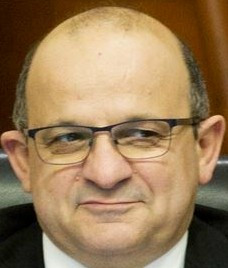 Caslin’s man – then CAO Carmen D’Angelo. Observing him in the seat of former regional CAOs like Mike Trojan was truly gut-wrenching.Believe it or not,  he is still suing the Region for his ultimate dismissal.

In the letter dated Sept. 7, 2022, the Ombudsman confirmed that Regional Council has successfully implemented all 16 recommendations found in his 2019 “Inside Job” report. Given council’s willingness to implement these changes, the Ombudsman’s letter indicates that “no further follow up reports are required and my Office will be closing our file in this matter.”

The 71-page “Inside Job” report responded to over 110 formal complaints registered with the Ontario Ombudsman’s office by members of the public. These complaints called on the Ombudsman to investigate the how the 2016 CAO hiring process was carried out, and many other related issues.

In addition to providing an extensive overview of the situation, and his findings, the Ombudsman gave Regional Council several recommendations to help avoid similar issues in the future. Some of these recommendations include:

“”While the 2016 CAO hiring process, and the resulting fallout, will long be remembered as stain on the Region’s reputation, this term of council made it a top priority to take immediate action on this matter. As a team, we implemented all of the Ombudsman’s recommendations, ensuring we took every step necessary to prevent this type of controversy from occurring again. I want to thank Mr. Dubé, and his staff, for the exceptional report and recommendations, as well as their commitment to work with us as we implemented policies to make the Region more open, fair and transparent. The residents of Niagara deserved better, and these new policies and practices will help make sure we are living up to our constituents’ appropriately high expectations.”” ~ Niagara Regional Chair Jim Bradley

For another key link on this issue, click on – https://www.ombudsman.on.ca/resources/news/press-releases/2019/ombudsman-finds-niagara-cao-hiring-was-inside-job