“There is no excuse or justification for the defacement of any public property, let alone a school and statue designed to honour one of history’s most recognized advocates for freedom, and noted conductor of the Underground Railroad.”                                 – Jim Bradley, Chair of Niagara Region, Ontario

A  Commentary by Doug Draper at Niagara At Large, followed by other important statements from an anti-racism organization, Niagara Regional Chair Jim Bradley and the Niagara Regional Police Service

By Doug Draper at NAL – 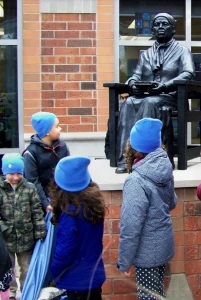 In 2016, children at Harriet Tubman Public School in St. Catharines look on after unveiling of a statue of the civil rights icon the St. Catharines, Ontario school is named after. File photo by Doug Draper

How sad. And how disgusting.

Most of all, what an awful lesson for young students at Harriet Tubman Public School in St. Catharines on low some members of our community can go in their hatred of people of colour and of other groups that serve as targets of their bigotry discrimination and hatred.

Six years ago, I was one of the journalists invited to Harriet Tubman Public School to celebrate the unveiling of a statue of the late, great civil rights icon that the school was named after.

Young children who were students at the school at the time, along with their parents and teachers, were bubbling with pride as scholars of Harriet Tubman talked out how this courageous woman, born a slave in the American south and who was not allowed to learn how to read at the time, went on for the rest of her life to campaign for that ability of future generations of children to learn how to read and fulfill their promise as human beings.

Since then we have had the spray painting of a Nazi swastika on a sidewalk in front of the school, the pulling down and breakage of a bust of Harriet Tubman at a historic Afro-Canadian church nearby, where Tubman worshipped while living in St. Catharines in the 1850s, and just this past weekend, the spray painting of that wonderful statue in front of the school’s front entrance with racist and homophobic graffiti. 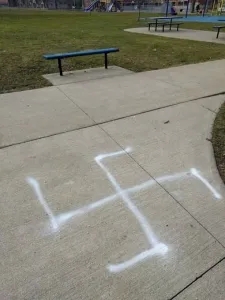 A few years ago, parents took their children to Harriet Tubman Public School to the horror of this Nazi swastika painted on a sidewalk nearby.

A few days ago, we also had vehicles in the parking lot of a black-owned restaurant nearby the school spray painted with the N-word.

Through all of this we’ve had some of our political leaders express their outrage, then say, as if it were a prescribed talking point for such occasions, that “this is not who we are” as a larger community.

In all due respect, it may not be who many of us are, but it certainly seems to be who some among us are. And if we don’t confront it, it is at our own peril.

I think we need to connect the dots here. This may not be as bad as the United States situation yet. But over the past few years, we have seen an unprecedented attack on the homes and properties of our elected representatives, we’ve seen harassment and threats aimed at our health care workers, we’ve seen these so-called “freedom riders” at their “freedom rallies” spewing Trump-like garbage under Canadian and old southern American Confederate flags.

And we’ve seen this hateful garbage growing in frequency at sites celebrating black and brown history.

There is a certain feeling among many Canadians that what we have seen grow into a cancer south of the border will not ever grow to that level here. But I remember a time, not so long ago; when many of my American friends believed it would never take such a strong hold there either.

I think we have to consider the possibility that it can happen here and work to root out whatever the anger and hatred is that is driving this disturbing conduct before it is too late.

Now here are statements from other prominent parties on this issue –

Saleh Waziruddin. Member of the Executive Committee for the Niagara Region Anti-Racism Association

More than a year ago, this bust of Harriet Tubman was pushed off its stand and damaged at a historic black church in St. Catharines, Ontario. The perpetrator was caught and police ruled that the act had to do with mental illness, not hate. But for at least some, the reason for this act remains in question.

While welcoming the statements made by a few elected officials, NRARA called on other elected officials, as well as everyone who has a voice, to join the condemnation to discourage any further escalation of white supremacist and anti-2SLGBTQQIA+ violence.

“The Niagara Region Anti-Racism Association condemns the flagrant vandalism of the Harriet Tubman Public School, including her statue, and nearby neighborhood in a direct white supremacist and homophobic attack. We welcome that some local elected officials have condemned this but we call on far wider condemnation from not only other elected officials but from everyone in Niagara who can add their voice. Those who perpetrated these attacks need to hear our region ringing with condemnation so that it stays in the minds of anyone who is encouraged by this vandalism to escalate to more violence.

This is not the first time a statue of Harriet Tubman has been violated in St. Catharines, and last year another Harriet Tubman School, in her home state of Maryland in the US, was also vandalized by white supremacists. No one in Niagara can rest in comfort thinking that the escalation of white supremacist  and anti-2SLGBTQQIA+ violence will escape us.

We encourage everyone to attend the City of Niagara Falls Anti-Racism Advisory Committee’s event on June 27th at the Niagara Falls History Museum for a discussion with Dr. Barbara Perry on how we can counter the rise of right-wing extremism and white supremacy in our region, and to take part in all efforts to stamp out white supremacy and hatred.”

The Niagara Region Anti-Racism Association was founded in the summer of 2018 and campaigns on police reforms, municipal anti-racism committees, employment equity, organizes speaker series and workshops, and supports individuals under racist attacks.

“I join with residents all over Niagara in expressing my unreserved repudiation of the vandalism that occurred over the weekend at Harriet Tubman School in St. Catharines.

There is no excuse or justification for the defacement of any public property, let alone a school and statue designed to honour one of history’s most recognized advocates for freedom, and noted conductor of the Underground Railroad.

This inexcusable act of vandalism is in no way emblematic of the vast majority of residents of our region, and it is exceptionally disappointing to see this type of activity continues to occur more than 150 years after the end of slavery in the United States. It is disheartening to know that anyone would conduct themselves in such a destructive and vicious manner.

While this act is unacceptable in every possible way, it is important to remember that the cowardly individuals who carried out this vandalism will not have any lasting impact on Harriet Tubman’s legacy. I can take some satisfaction in knowing that Harriet Tubman will continue to stand as an icon of courage and freedom, serving as an inspiration to millions nearly 110 years after her death.”

Here is a News Release from the Niagara Regional Police Service –

Officers from the 1 District St. Catharines office of the Niagara Regional Police Service (NRPS) are investigating a series of vandalism incidents which included racist and homophobic words and explicit images. 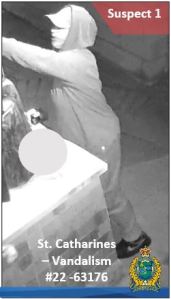 On June 12, 2022, at approximately 8:00am, 1 District – St. Catharines uniform officers responded to a report of spray paint damage on a home on George Street near Catherine Street in St. Catharines.  Racist and homophobic words had been sprayed on the house siding using blue and orange paint.

Officers continued to investigate in the area finding multiple vehicles, and buildings were targeted including the exterior of Harriet Tubman School at 84 Henry Street.  A statue of Harriet Tubman on the property was vandalized with paint. The investigation has determined the vandalism at the school occurred at approximately 9:55pm on June 11, 2022.

Officers were able to be locate 13 incidents of damage to property.  Damaged property includes:

Collective damages are estimated at more than $5000.

The investigation by detectives has located footage of the two unknown suspects.

Suspect #1 is described as:

Suspect #2 is described as:

The suspects are believed to have traveled in the area on foot or bicycle.  The suspects were on George Street, Catherine Street, Albert Street, Henry Street, and Louisa Street.  Anyone (residents or businesses) in the above area with closed circuit security cameras, doorbell video cameras, or dash cameras are asked to review their footage for suspicious activity for the period between June 11, 2022, 9:00pm and 1:00am on June 12, 2022.

The NRPS recognizes the harmful impact this crime has on members of our community and are working diligently to bring those responsible before the courts to be held accountable.

The investigation has been assigned to detectives from the 1 District detective office.  They are being assisted by officers from the NRPS Equity, Diversity, and Inclusion Unit.  Anyone with information is asked to call 905-688-4111, option 3, extension 1009482

To read more on this issue, you can visit the following links –