Ontario Liberals Are Like the Deja Vu of Dalton McGuinty and Kalthleen Wynne All Over Again, And Who Wants That Culteru of Screw You, We’re in Charge Here in Ontario  Arrogance Back?

Ontario Liberal Leader Steven Del Duca was a dutiful member of the McGuinty’Wynne Liberal team. Now he wants us to believe he is an answer for our future.

Ontario Liberal Leader (why do I have to keep looking up his name) Steven Del Duca) released his party’s full platform this Monday,  May 9th.

The third party’s challenged communications gurus attempted to circulate a copy of the platform to news outlets today but, compared to news circulated by the governing Ford Government and NDP, information about the platform was hard to get to.

Perhaps that makes sense given the fact that going back to the earlier years of this relatively new century, when the Ontario Liberals were in power under the smug, dictatorial leadership of Dalton McGuinty and his sycophant Kathleen Wynne, almost anything resembling openness and transparency when it came to information the public had a right to know was in short supply anyway.

However, according to one Global News report, “ 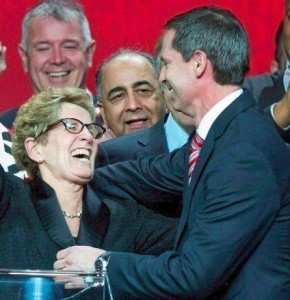 Google photos of former Liberal Premier’s Kathleen Wynne (left and Dalton McGuinty and count the number of images of them looking like Clark Gable and Vivian Leigh in Gone With The Wind.

According to a report on Global News, “some of the key features introduced in the Liberal’s platform include putting an end to for-profit long-term care, introducing a new income tax and rent control, proposing a four-day work week and reopening the province’s child care deal with the federal government.”

To review the entire Liberal platform, I was able to find the following if you can open a pdf from the party’s website – https://ontarioliberal.ca/wp-content/uploads/2022/05/Ontario-Liberal-Platform.pdf

The Ontario New Democats (NDP) were quick to put out a far more accessible news release, outlining what the NDP sees as shortcomings in the Liberal platform.

Here is the NDP critique, released this May 9th, within an hour or two of the Liberals letting their platform out –

Under Del Duca, the Liberals are again in a race with the Conservatives to balance the budget at the expense of investments desperately needed to help save people money — like making sure you’re covered for mental health, dental care and prescription drugs.

The Liberal platform has no help for people paying sky-high auto insurance, and no improvements for Ontario’s broken health care and mental health care systems.

Steven Del Duca said he thought his Liberals had been too progressive (https://twitter.com/roccorossiTO/status/1196468348474810370) , but what does he think is progressive?

* letting hydro rates skyrocket and selling off Hydro One (https://www.macleans.ca/news/it-was-my-mistake-wynne-says-of-high-electricity-bills/)

* taking supports away from children with autism (https://cupe.ca/ontario-liberals-austerity-plan-leaving-kids-autism-behind)

Del Duca’s platform relies on made-up federal money, and it hides what he will cut to beat Doug Ford to a balanced budget. He needs to tell people what he’ll cut.

To read a few additional reports on the Ontario Liberal Party’s 2022 election platform, click on –