A  News Commentary by Doug Draper

George Darte was there – not all that long ago – speaking out for the preservation of Niagara’s green spaces.

Then, suddenly y, he was gone.

The St. first-term St. Catharines Regional Councillor, who had already earned a reputation as a solid voice for protecting and preserving what is left of Niagara’s farmlands, woodlands and wetlands, informed fellow councillors via email this past March 30th that he was vacating his council seat for “private” reasons and effective immediately.

Callouts by Niagara At Large to obtain even a clue about what led to Darte’s decision came up dry.

So all that those of us who care about protecting what remains of Niagara’s natural heritage are left with is that we have lost a good ally on the Region’s council.

Indeed, it was just late last November that Darte was among the first on the Region’s council, to make a case for approving the strongest mesures possible for protecting green space (what those who follow Niagara Regional Council closely know as ‘Option 3C’) in the Region’s soon-to-receive-a-final-vote Official Plan.

Saving natural areas like Waverly Woods in Fort Erie from urban sprawl should be a priority in any climate action plan for our region.

“We don’t want to be singing; ‘They paved paradise, put up a parking lot. …’

“What we are about to vote on tonight is forever, it is for eternity,” continued Darte. “What we are being asked to do tonight is to help decide the fate of our dear Mother Earth.”

“We need to give the next hundreds of generations ….and our successors a chance to survive on this planet. We owe it to them and that can be our legacy as one seemingly significant bunch of councillors,” Darte said.

At that same meeting, a majority on the Region’s council (minus many of the usual suspects on the right-wing side), voted in favour of the stronger Option 3C measures for green protection and Darte certainly deserves a good deal of credit for that.

It was not the only time the St. Catharines regional councillor spoke out for conserving our natural resources and Niagara Regional Chair Jim Bradley, also a strong voice for environmental protection, would sometimes look Darte’s way when it came to the latest estimates of how more food-growing land Niagara would lose if nothing was done to control urban sprawl.

So now – just seven months before the next municipal elections – Darte is gone and the question now becomes who, if anyone, should fill his seat.

One way of doing it – and it will be the City of St. Catharines that makes the decision – is to pick the person who polled the next highest number of votes for a regional council seat in the city during the last 2018 municipal elections.

In this case, the choices are disturbing.

Mike Britton. Do we really want this enabler from the Al Caslin cabal days at Niagara Region sitting on regional council now?

They begin with Mike Britton, a former St. Catharines city councillor and Tory supporter who co-signed a memo in 2015, trying to discredit the St. Catharines Standard for what turned out to be the newspaper’s  award-winning investigative reporting on the last (Al Caslin’s) regional council’s support  of then Niagara Peninsula Conservation Authority  Chief Administrative Officer (CAO), now-gone Carmen D’Angelo, who would later become the focus of controversy over his hiring as CAO for the Region. 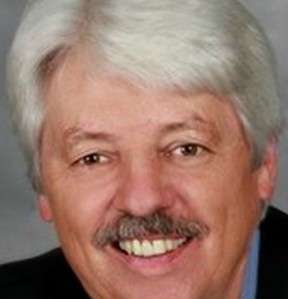 Or how about Bruce Timms who, among other things. sat on the board of the NPCA when citizen Ed Smith was wrongfully sued for speaking out about the agency’s questionable conduct, and when good staff members were let go, as the NPCA, during Timms’ time on the board, became a limp wrist of its former self in the effort to preserve our natural environment. In an era of climate crisis, why on earth would we want anyone like him back?

Then there is former St. Catharines regional councillor Bruce Timms, who had a record of voting with the so-called “:Caslin cabal” and who served as a board member and as chair of the board of the Niagara Peninsula Conservation Authority (NPCA) during a period many now see as shameful in that agency’s long and mostly time-honoured history.

In stark contrast to Darte’s advocacy for our natural heritage, there is a video, still available for anyone who wants to see it, of Timms, on Hamilton’s CHCH TV news channel back around six years ago, claiming that you can pave over one provincially significant wetland and construct another (through something called “biodiversity offsetting”) in just five or so years.

Rather than appoint either of these two to fill Darte’s seat, let’s hope that St. Catharines’ city council decides, this close to the coming municipal elections, to simply leave the seat open and let the people of the community decide – this coming fall – who should sit on Regional Council.