Some Stand-Out Words from Niagara Regional Chair Jim Bradley’s 2022 State of the Region Address, with a Foreword by Doug Draper

A Foreword by Niagara At Large reporter and publisher Doug Draper 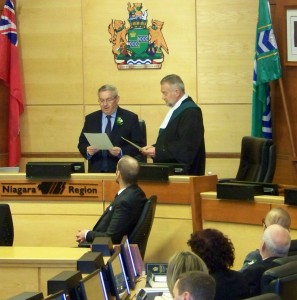 In early December, 2018, former St. Catharines MPP Jim Bradley reads oath of office before beginning his new role as Chair of Niagara Regional Council. Many members of the public were breathing a sigh of relief after four years of Al Caslin and his enablers at the helm.

State of the Region addresses, delivered before an audience made up of largely business representatives from across Niagara and, regardless of who delivers them– are typically a fairly dry, nuts-and-bolts presentations of the Regional government’s “accomplishments” over the past year, with some mention of work that is still in progress.

I can never recall one of these addresses speaking to disturbing conduct that has occurred in the ranks of regional council or staff in the past. These speeches usually leave negative stuff like that locked away in the attic. 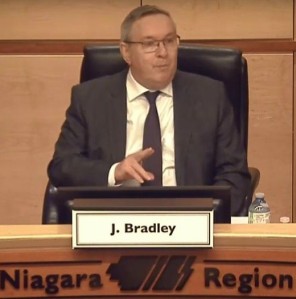 Yet how could Jim Bradley, who this March 29th delivered his fourth and last State of the Region address for this term of Regional Council, discuss how hard a majority on the council and the Region’s staff have worked to restore some of the public trust and confidence that was so badly shaken from 2014 through most of 2018, when former Regional Chair Al Caslin and what widely came to be known as his “cabal” of supporters and enablers were in charge.

It was a dark time for municipal politics in Niagara and it would be hard for Bradley (who does not have a record of kicking up old dirt) not to discuss it in the context of everything he hopes a majority on the council he has chaired has done to restore public trust.

So here is the section of Bradley’s March 29th, State of the Region address that gets into this and I happen to feel that he has addressed this awful period in the history of our municipal politics fairly well.

From Jim Bradley’s State of the Region address –

“In the past, I have avoided commenting on the legacy of turmoil we inherited from the previous term of council. I always wanted to focus on the positive, and focus on our future. 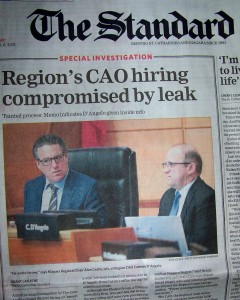 Front page headlines like this became common in Niagara during the Caslin years at the Region.

But I think it is worth remembering how far we have come, and the role that this Regional Council has played in getting us where we are today.

In late 2018, the Region was on the front page of the paper seemingly every day, and for all the wrong reasons.

We were patiently awaiting the results of a highly contentious report from the provincial Ombudsman on the hiring of the previous CAO.

The Niagara Region had recently been recognized as Canada’s most secretive municipality by the Canadian Association of Journalists.

Senior staff in departments across the region had departed, and morale was at an all-time low.

Many councilors, including myself, ran on a platform of transparency. We campaigned on a promise to restore the reputation of the Region and to reverse the mistakes of the past.

I am honored to work with a team of councillors who took immediate action to set a new tone and re-establish Niagara Region’s character and standing in the community.

Upon being sworn in, we took steps to create policies that will safeguard future hiring practices and help protect the region moving forward.

We restored our relationship with the media, even going as far as passing a motion that I championed to support our local newspapers and radio stations.

We hired key staff in a number of areas, including the Chief Administrative Officer, following a process that was beyond reproach.

But we did not stop there.

This council brought in Niagara’s first lobbyist registry, ensuring the public can have a better understanding of who is endeavoring to influence public policy, and how your dollars are spent. 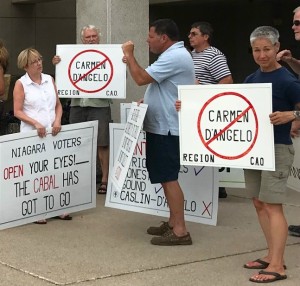 Citizen demonstrations like this, outside the front doors of Niagara Region’s headquarters, also became common during the Caslin era.

We approved a whistle blower policy so our staff have an avenue available to them to report issues and concerns. Staff are now formally protected and encouraged to bring their concerns forward without fear of reprisal.

We held ourselves to a higher standard, ensuring council’s behaviour reflects the highest integrity and what you deserve from an elected official.

The outcomes of these efforts have been substantial and noticeable:

Regional council is not making front-page news across the country for mistakes and cover-ups;

Our reputation has improved in the eyes of other levels of government;

And more importantly, that same reputation seems to have improved with our constituents.

So how did we get here? It took all of council working together, as a team with a singular vision, to restore and rebuild the Region. …

But Council’s accomplishments were not limited to governance and reputation….”

The full transcript of Niagara Regional Chair Jim Bradley’s address can be found on the Niagara Region’s website. You can read it by clicking on – https://www.niagararegion.ca/news/article.aspx?news=1353