A Statement by Canada’s Prime Minister on Louis Riel Day 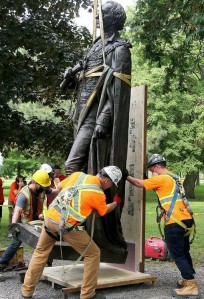 While Louis Riel’s stature is now such that a national day of tribute for him is now on the calendar, the stature of John A. Macdonland, Canada’s first prime minister who oversaw Riel’s execution is such that statues of him like this one, in his hometown of Kingston, Ontario, are being removed from public spaces across the country.

(A Brief Foreword by Niagara At Large reporter and publisher Doug Draper – As Canada observes Louis Riel Day this November 16th, I think back on some of the crap (to paraphrase Paul Simon) we have been taught in high school.

Among the crap I was taught when I was going to high school in Ontario back in the 1960s was that Louis Riel was a treasonous, murderous rebel who had to be hung, which he was on November 16th, 1885 with the blessing of Canada’s great ‘Father of Confederation, then Prime Minister John A. Macdonald.

Now Louis Riel is portrayed in official circles as a bonafide Canadian champion for social justice and equality, while statues of Macdonald, including one this past September in his hometown of Kingston, Ontario, are being removed from public places in response to his role as a supporter of residential schools engaged in the cultural genocide of our country’s indigenous peoples.

Of course, the darker side of Macdonald’s record was known to historians at the time but the school curriculum was such that our teachers were not allowed to teach us any of that in the classroom. So what we were fed in history class on this topic and many others, as the legendary French philosopher Voltaire would put it, was “the commonly agreed to lie.”)

Now here is the statement by Prime Minister Justin Trudeau –

“Today, we join the Métis Nation and all Canadians in commemorating the legacy of Métis leader and founder of Manitoba, Louis Riel.

“A politician, an impassioned activist, and a visionary, Louis Riel advocated and fought for equality, social justice, and minority language rights. Although he was elected to represent Manitobans in Ottawa, he was never permitted to take his duly elected seat in Parliament.

“In spite of this injustice, his contributions to defending the rights and culture of the Métis Nation and Francophones have left a lasting impact on Confederation and paved the way for a more inclusive country.

“As we celebrate Louis Riel’s life, we also acknowledge the injustices and systemic racism the Métis people – and all Indigenous peoples – have faced for centuries, and continue to face today. We know that it is only by working together that we will make real progress in righting these wrongs. 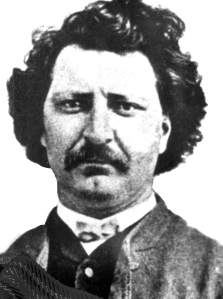 “The Government of Canada continues to work with Indigenous peoples to build a renewed relationship based on affirmation of rights, respect, cooperation, and partnership.

“We are working with the Métis Nation to amplify its voices, address its unique needs and concerns, and advance its inherent right to self-determination and self-government. Louis Riel’s vision will keep inspiring us as we continue to walk the shared path of reconciliation and to strengthen the Canada-Métis Nation relationship for the benefit of our country and all Canadians.

“On this day, I invite everyone to honour Louis Riel’s enduring influence, and to celebrate and learn about the Michif language as well as the culture, traditions, and way of life of the Métis. Let us recognize the essential role they have played, and continue to play, in building a better Canada.”