On This November 11th, Remembering and Honouring Those Who Served Our Country 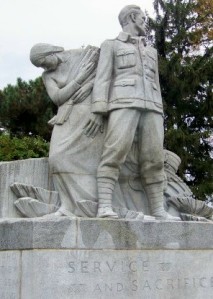 A monument to those who fought and died in the World Wars of the last century, standing proudly in Chippawa Park in Welland, Ontario. File photo by Doug Draper

“Today we remember and honour the many Canadians who have courageously served our country, in times of conflict and in times of peace, so that we may live in freedom and safety.

We express gratitude for the brave sacrifices of those who served and continue to serve, who have willingly faced great hardship and selflessly put the safety of others before their own.

I join all Ontarians in mourning those who have made ultimate sacrifice to safeguard peace and our shared values, and in honouring their loved ones who have endured so much. We will never take for granted their immeasurable contributions.

On Remembrance Day, we also recognize our duty as a province to care for those who have made extraordinary sacrifices for our country.

Dead Canadian soldiers on the beaches of Dieppe, France in August, 1942, lost in an epic fight against fascism. The fight against modern-day manifestations of fascism, here and around the world,  goes on

I encourage all Ontarians to reflect on the peace and security our families enjoy as a result of the vigilance and sacrifice of our valiant Armed Forces.

Lest we forget the debt we owe to those who have bravely served, and those who continue to serve, so that we can live in a free, peaceful and prosperous Canada.”

To read a Remembrance Day Statement from Canada’s Prime Minister, click on – https://pm.gc.ca/en/news/statements/2021/11/11/statement-prime-minister-remembrance-day

One response to “On This November 11th, Remembering and Honouring Those Who Served Our Country”