Buffalo, New York – Following an announcement by the Canadian government of plans to reopen the border between the United States and Canada to vaccinated Americans on August 9th, Congressman Brian Higgins (NY-26) is pushing the United States government to act.  Higgins expressed his dissatisfaction with the lack of response by the U.S. in remarks on the floor of the House of Representatives.

Higgins said in part, “This week the Canadian Government announced plans to reopen the border to fully vaccinated Americans on August 9th. On January 21st of this year, we were promised a plan would be developed by the United States to address travel to Canada within 14 days. 180 days have now passed.  We are still waiting for that plan.”

To watch Buffalo, New York area Congressman raising this issue on the House Floor in the U.S. Capital building, click on the screen immediatetly below –

Congressman Higgins serves as Co-Chair of both the Canada-U.S. Interparliamentary Group and the Congressional Northern Border Caucus.  The district he represents includes Buffalo and Niagara Falls, New York.

The Congressman points out the conflicting U.S. guidance between domestic and international policy despite similar vaccination rates in both the Unites States and Canada. 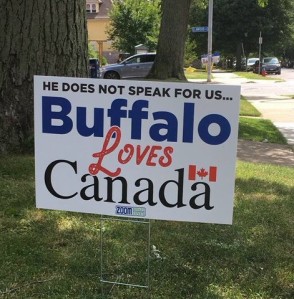 A year or so before the pandemic started, signs like this began appearing on lawns in Buffalo neighbourhoods. Buffalo residents were trying to assure us that regardless of anything Trump had to say about Canada, they considered us to be friends.

Higgins added, “The United States Centers for Disease Control and Prevention publicly advise that fully vaccinated Americans are free to safely resume all pre-pandemic activity. It is time for the United States to align its border policy with the science, with the facts and with the data.  Action is long overdue. Open the U.S. border to our Canadian neighbors.”

Conflicting restrictions are also in place for those wishing to enter the U.S. by land vs. by air, adding to the frustration in border communities who can reach border crossings within minutes. The existing U.S. order restricting non-essential travel across Land Ports of Entry is set to expire on July 21.

To read a related story recently posted on Niagara At Large, click on – https://niagaraatlarge.com/2021/07/19/buffalo-n-y-congressman-applauds-canadian-plan-for-fully-vaccinated-americans-to-cross-border/