Niagara Falls to be Illuminated – This Monday, June 28th – in Celebration of Pride Month

Niagara Falls, Ontario  – The Niagara Falls Illumination Board will be illuminating both the Canadian Horseshoe and American Falls in rainbow colours for 30 minutes tonight at the top of each hour at 9:00, 10:00 and 11:00pm in celebration of Pride Month. 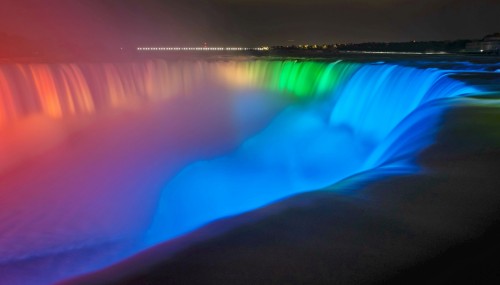 The waters of Horseshoe Falls, illuminated in previous years, in rainbow colours, just as they will be again, this June 28th. Photo courtesy of Niagara Parks

Today’s date (June 28th) holds significance to the LGBTQ2S+ community as the anniversary of the Stonewall riots that took place on June 28, 1969, in the Greenwich Village neighbourhood of New York City, with members of the gay community protesting a police raid at the Stonewall Inn.

The events of this day are widely considered a watershed moment in the awareness and progress of gay rights, with the first gay rights marches taking place in major American cities one year later on the anniversary.

It is the Illumination Board’s responsibility and mandate to finance and maintain the nightly illumination of both the Horseshoe and American Falls. For more information please visit – www.niagaraparks.com